A former Arsenal captain, Arteta made 150 appearances for the Gunners between 2011 and 2016, having spent six years at Everton prior to that.

• Earlier in his playing career, he played for two years at Scottish Premiership side Rangers before joining Real Sociedad in 2004.

•Arteta’s team talk came after Arsenal had lost their opening three Premier League games of last season — a run that included a 5-0 thrashing at Manchester City. 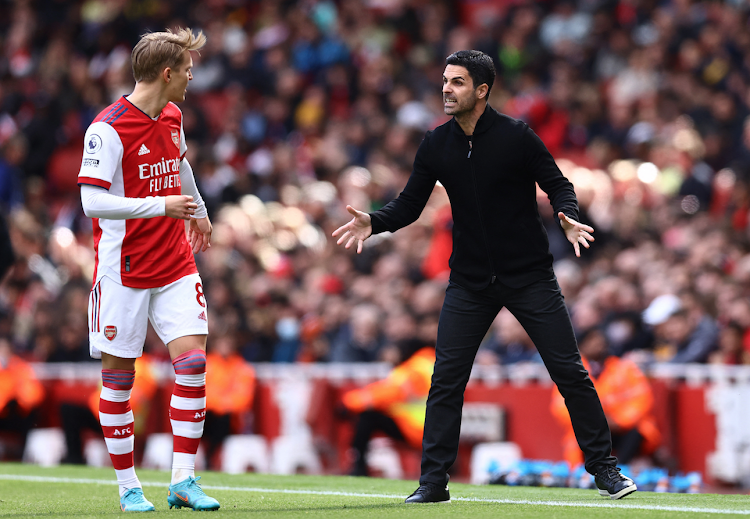 Arsenal boss Mikel Arteta has revealed how having open heart surgery as a toddler shaped his football career.

Footage from the trailer of Amazon Prime’s new documentary about Arsenal shows Arteta, 40, opening up to his players in a team talk about receiving life-saving surgery as a two-year-old.

Arteta spoke about the moment on BBC Breakfast before the release of the All or Nothing series on Thursday.

“I never opened up like this to anyone,” he said. “I think 90 per cent of the boys or staff wouldn’t know about that issue. But it’s how I felt just before that moment, it’s nothing that I planned.”

A former Arsenal captain, Arteta made 150 appearances for the Gunners between 2011 and 2016, having spent six years at Everton prior to that.

Earlier in his playing career, he played for two years at Scottish Premiership side Rangers before joining Real Sociedad in 2004.

But becoming a professional footballer was not always on the cards for the Spaniard, who was told by doctors at a young age he would not be able to do much exercise because of his heart condition.

“I was born with a big heart issue that they could not resolve until I was two years old because I was too little,” Arteta explained.

“They had to open my heart and go through it. It was one of the first surgeries that was done in that way in Spain, so we didn’t know how it was going to end up. I was a really lively kid, the doctor was telling my father and mother that he needs to calm down, that he’s not going to be able to do much exercise with that problem.”

Arteta’s team talk came after Arsenal had lost their opening three Premier League games of last season — a run that included a 5-0 thrashing at Manchester City.

Before the Gunners’ next match, at home to promoted Norwich, the documentary teaser shows Arteta attempting to inspire his players by comparing elite sports teams to the high-performance medical teams that saved his life.

“They are willing to work 24/7. They do it only for one reason — because they love what they do. That’s their drive, that’s their purpose,” he is heard saying in the trailer. Arteta was able to pursue his love of football thanks to the medical staff that performed his surgery 38 years ago, and he believes the process encouraged him to chase his dreams.

“Everything developed in a normal way and I was able to fulfil my dream to be a professional footballer,” he said.

Asked if the experienced shaped him as a youngster, he said: “I think it did in a way.

“When I was younger, I was told you cannot do that, you cannot expose yourself so much, we cannot take you to the limit of your heart capacity. I was always pushing myself to the limit.

The Norway midfielder, 23, captained the Gunners as they beat Everton 2-0 in a friendly in Baltimore at the weekend.
Sports
6 months ago

Patino — who says he grew up loving former Gunners midfielder Santi Cazorla — is an England Under-19 international, although he is also eligible for ...
Sports
7 months ago
Post a comment
by BBC
Football
04 August 2022 - 00:00
Read The E-Paper