“It was a humbling experience, and an emotional one, when you look at the journey that we have travelled as Banyana Banyana,” captain Refiloe Jane told BBC Sport Africa.

• For Banyana Banyana coach Desire Ellis, this was a hugely-satisfying win after first trying — and failing — as a player to win the trophy when losing the final 22 years ago. 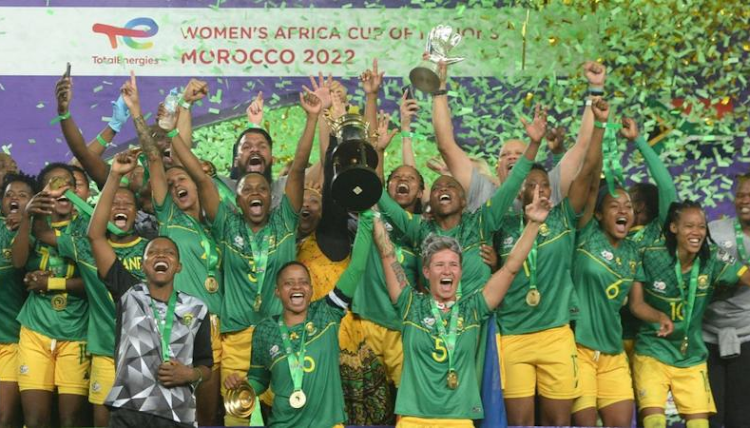 Although Rosella Ayane pulled a goal back for the Atlas Lionesses ten minutes from time, it was too little too late for a team making its first appearance in the final. South Africa had lost their four previous finals: in 2000, 2008, 2012 and 2018.

“It was a humbling experience, and an emotional one, when you look at the journey that we have travelled as Banyana Banyana,” captain Refiloe Jane told BBC Sport Africa.

“To finally get to this point meant a lot for everyone. When the final whistle went out, I was crying. It was the most humbling and emotional experience.

“I don’t think I’ve ever cried so much after a football match - that goes to show our journey, everything that we had to go through and things have finally come together.”

For Banyana Banyana coach Desire Ellis, this was a hugely-satisfying win after first trying — and failing — as a player to win the trophy when losing the final 22 years ago.

After Ellis oversaw another final defeat, against Nigeria, four years ago from the touchline, her charges entered this tournament with a so-called ‘mentality coach’ in a bid to improve positivity.

“It feels amazing,” she told the BBC. “I’m an African champion now - and no one can take that away from us.”

South Africa needed real composure throughout the game to silence a raucous home crowd that had filled the 53,000-seater stadium at least two hours before kick-off, and which lit up the Rabat sky with dozens of red and white flares during the game. 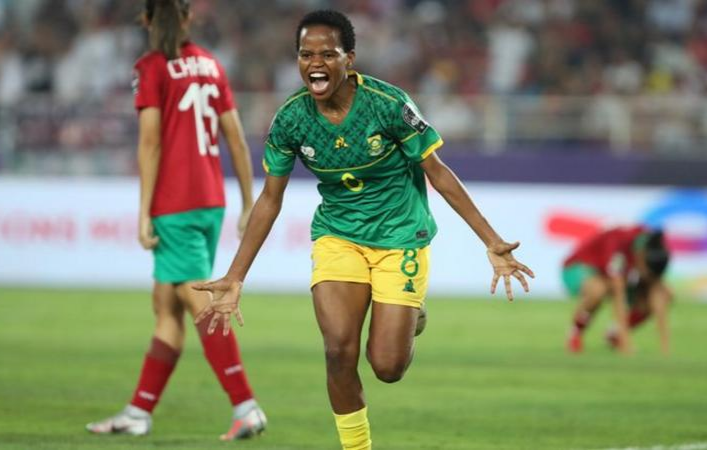 Hilda Magaia hit a brace for Banyana Banyana in the final, scoring in the 63rd and 71st minutes
Image: BBC

The first half was a tense affair, with no chances on target from either side, but the game burst into life when Magaia latched onto Jermaine Seoposenwe’s cutback just after the hour to give South Africa their first ever lead in a Wafcon final.

Eight minutes later, the South Korea-based forward made it two as she punished slack defence from Nesryne El Chad, who had otherwise impressed during the finals, to dink the ball past Moroccan goalkeeper Khadija Err-michi for a crucial two-goal lead.

Morocco coach Reynald Pedros rang the changes in a desperate bid to get back into the game and was rewarded when Tottenham Hotspur’s Ayane reduced arrears to give the hosts belated belief, so ending goalkeeper Andile Dlamini’s run of over six hours without conceding.

In the 98th minute, centre-back Yasmin Mrabet rose to meet a teasing cross from substitute Ghizlane Chhiri but as the ball sailed over, so did Morocco’s hopes of a shock title.

Nonetheless, the first North African hosts can reflect on not only staging a hugely-successful tournament but also achieving a maiden Women’s World Cup qualification, also a first for the region, when reaching the semi-finals.

Morocco’s federation has ambitious plans for the women’s game, hoping to have 90,000 players and 1,000 licenced coaches by 2024, and this tournament has proved a watershed moment in terms of igniting support and changing perceptions towards the sport.

“It’s disappointing that we couldn’t get the job done but when I get a chance to reflect, I’m going to realise what we’ve actually achieved as a team — it’s just incredible,” Ayane told BBC Sport Africa.

“This is our first final and I don’t think it’s going to be the last. We put the pressure on for the last 15 minutes and if we had had an extra 5-10 minutes, I think we were getting another goal.

“I’ve not experienced an atmosphere like that back home in England — it’s incredible,” she said of the crowd. “I’m so proud of Moroccan people for coming out and supporting us, and I hope it continues for a long time.”

South Africa, meanwhile, have brought relief to a country ravaged by regular power cuts over the last six weeks and an unemployment rate approaching 35 per cent.

Many of the squad sank to the floor in disbelief at the final whistle, as a repeatedly-elusive trophy finally found its way into delighted South African hands.

Banyana Banyana were the only side to win all six of their matches and will travel to next year’s Women’s World Cup as African champions, with Morocco, third-placed Zambia and nine-time champions Nigeria joining them in the 2023 tournament.

None of the Super Falcons players has received their allocated allowances or bonus of over $10,000 (Sh1.1m) for the wins over Botswana, Burundi and ...
Sports
6 months ago

Morocco beat Nigeria to set up final against South Africa

Atlas Lionesses goalkeeper Khadija Er-Rmici denied Ifeoma Onumonu in the second round of the shootout, allowing Rosella Ayane to stroke in the ...
Sports
6 months ago

Zambia’s Banda out of WAFCON over ‘gender eligibility’ issues

Banda is one of the most prolific strikers in African women’s football and is currently in Morocco and training with the Copper Queens squad, despite ...
Sports
6 months ago
Post a comment
by BBC
Football
25 July 2022 - 00:00
Read The E-Paper