The decision came 48 hours after the team snubbed their league encounter against Gusii FC at Awendo Green Stadium on Wednesday.

•Munjal also lashed out at the Football Kenya Federation Transition Committee for 'failing in their arbitration role'. 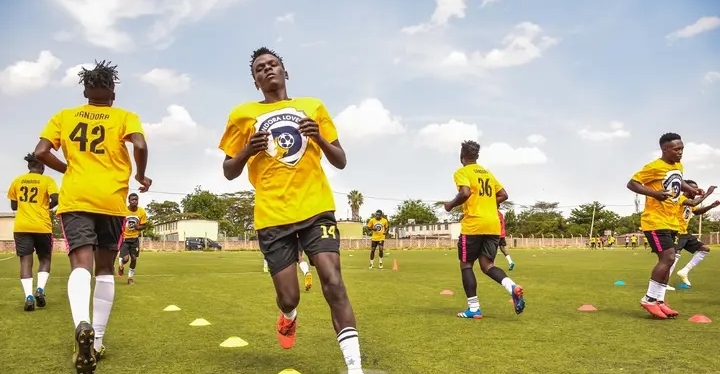 Dandora Love players in a past warm up session.
Image: HANDOUT

Dandora Love have pulled out of the National Super League (NSL) barely a week after Zoo Kericho also withdrew from the second-tier competition.

The decision came 48 hours after the team snubbed their league encounter against Gusii FC at Awendo Green Stadium on Wednesday.

Club owner Raphael Munjal said they reached the decision after establishing that some of their players had colluded with opponents to fix matches.

Munjal also lashed out at the Football Kenya Federation Transition Committee for 'failing in their arbitration role'.

“It's with much sadness and disappointment from our house that we announce withdrawal from the league,” read Munjal's statement.

“But the Transition Committee ignored our plea and so did Dandora Love technical (bench) which led to their dismissal by my office regarding the same issue of match-fixing.”

“To our fans, we are sorry for the inconvenience caused. To football lovers around the country, we also apologise and we will take this opportunity to put our house in order,” it concluded.

The club’s management announced the sacking of the duo over what they termed as defiance.

“We are hereby writing to inform you of our decision to immediately terminate our contract with James Nandwa and Kevin Wandera owing to persistent insubordination culminating in their disobedience to the court order despite the same being brought to their attention by the team lawyer and the Chief Executive Officer (CEO),” the club said in a statement.

That was after the Sports Disputes Tribunal (SDT) halted NSL and Division One matches for seven days pending the hearing of a case challenging the manner in which the leagues are run.

Some eight clubs drawn from the two leagues had on May 20 moved to the SDT accusing the FKF Transition Committee and the FKF Independent Disciplinary and Arbitrary Committee of failing to solve match disputes.

Despite the order, three NSL matches were played in round 27 of the 2021/22 season with Dandora Love hosting Migori Youth at Camp Toyoyo in a match they lost 5-1.

APS, Muhoroni jostle for top spot in NSL Round 32