Real Madrid youngsters ready to take over from club legends

Since Rodriguez’s arrival, the only real Galactico business Madrid have done was splashing an initial £89m on a 28-year-old Eden Hazard from Chelsea.

•None of Karim Benzema, Luka Modric, Toni Kroos or Casemiro was on the pitch as the final whistle went on a 6-5 aggregate success over Manchester City that earned Carlo Ancelotti’s side a spot in Saturday’s final against Liverpool.

•Alongside Kroos and Gareth Bale, they are the stars remaining from the early years of Perez’s second tenure in which the ‘Galactico’ approach that characterised his first stint as president continued. 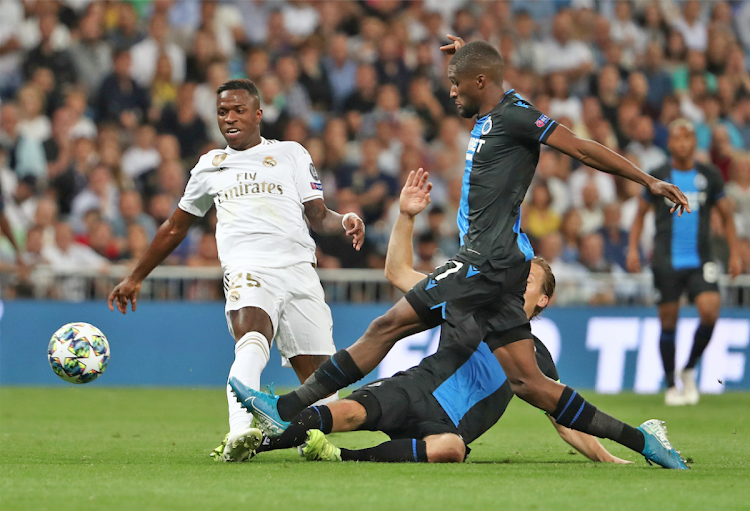 Real Madrid's Vinicius Junior in action with Club Brugge's Clinton Mata and Ruud Vormer in a past match
Image: FILE

As Real Madrid’s aging stars watched on from the touch-line while their younger counterparts saw out a remarkable Champions League semi-final victory, it was evident that the club’s immediate and longer-term future may be in better shape than many critics have suggested.

None of Karim Benzema, Luka Modric, Toni Kroos or Casemiro was on the pitch as the final whistle went on a 6-5 aggregate success over Manchester City that earned Carlo Ancelotti’s side a spot in Saturday’s final against Liverpool.

Rodrygo wrote his name into Real folklore with two late goals to take that tie to extra time, Eduardo Camavinga glided across the turf making the Bernabeu his own and Federico Valverde’s engine was still whirring after 120 minutes.

Brazil forward Vinicius Junior, whose tally of 51 appearances this season is more than any of his teammates, scored a superb solo effort in the first leg and lasted until five minutes from time in the second.

In many ways— despite the frustration at failing to land Kylian Mbappe from Paris St-Germain and the problems that may arise from that—this Champions League run has seen president Florentino Perez’s transfer strategy of the past few years come to fruition, with the talented prospects he has invested in delivering on their potential at key moments to put Real on the verge of a 14th European Cup triumph.

It has also provided a glimpse of the evolution at the La Liga champions as Modric and Benzema enter their twilight years following a decade at the club in which they helped deliver four Champions Leagues.

Alongside Kroos and Gareth Bale, they are the stars remaining from the early years of Perez’s second tenure in which the ‘Galactico’ approach that characterised his first stint as president continued.

In the early 2000s, the arrival of Luis Figo from rivals Barcelona was followed by high-profile acquisitions of Zinedine Zidane, Ronaldo, David Beckham and Michael Owen. On Perez’s return in 2009, it was Kaka and Cristiano Ronaldo to kick things off.

Since James Rodriguez’s arrival after the 2014 World Cup, the only real Galactico business Madrid have done was splashing an initial £89m on a 28-year-old Eden Hazard from Chelsea.

The rest of their recruitment has focused largely on younger prospects—albeit by no means cheap - or free transfers.

Last summer David Alaba’s free transfer from Bayern Munich and the £28m move for teenage Rennes midfielder Camavinga were the only incomings, following a season of no signings.

Former Real boss Jorge Valdano analysed the situation in 2017. “Did Florentino change?” he asked. “No. The market changed. Now it’s incredibly difficult for the club to be able to wait for a talent to mature into a Ballon d’Or winner and then buy them just because you’re Real Madrid.”

Real’s pursuit of Vinicius highlighted their strategy of trying to sweep up the best young players in the world, with chief scout Juni Calafat—who also spotted Rodrygo and defender Eder Militao—travelling to Brazil to secure Vinicius’ signature when he was only 16 and had played only 17 minutes of senior football for Flamengo. Vinicius completed his move to Madrid in a deal worth £39m once he turned 18 in July 2018.

“Vinicius and I made the jump from Flamengo to Real Madrid. But there is a big difference,” says former Brazil winger Savio, who signed in 1997.

“I left Flamengo when I was 23, almost 24. I left with a bit more experience. I learned a lot of things in the first season, mainly in terms of changing countries, football, tactics.

“But Vinicius was 18 years old, a very young player. He practically jumps from Flamengo, from the youth teams, to the first team. So there were still things to learn, to take to the pitch in terms of technique and tactics.

That transfer is bearing fruit, particularly this season with 21-year-old Vinicius producing his best return to date - scoring 21 times in all competitions, registering 20 assists and forging a formidable partnership with prolific 34-year-old Benzema.

“With all the change and with all the difficulties he has had in the first few seasons, he never stopped being the Vinicius I saw in Flamengo,” says Savio. “That is the one-on-ones, the individual quality. This year he is showing more and more of his potential and talent.”

The heir to Modric’s throne?

One question mark for Real is who will succeed the long-standing midfield trio of Modric, Kroos and Casemiro, who are 36, 32 and 30 respectively.

Former Real defender Fernando Hierro, Ancelotti’s assistant during his first spell at the club, believes 19-year-old France international Camavinga and 23-year-old Uruguayan Valverde - signed from Penarol six years ago - have the quality to fill that void.

“Modric is ageing like fine wine. Let’s hope he can perform at this level for one or two more years,” says Hierro. “Adapting to a club like Real Madrid is not easy and Camavinga and Valverde are really prepared to step in.”

Ex-Real playmaker Guti agrees. “Fede is really a very talented player,” he says. “He should just prove it on the pitch, more so than he has done so far because he has got a great talent.

“Camavinga is really another very talented player. Of course it is not easy to replace someone like Modric. If you give them time, those two will really grow and perform very well at Real Madrid.”

Camavinga arrived as one of the most sought-after prospects in Europe and Ancelotti has described him as “the present and the future of the club”, calling on his young midfielders to learn from the experienced professionals around them.

“They are competing with the best in the world and they must evaluate and understand that in the future they will be the ones playing there,” Ancelotti told Spanish newspaper AS.

“Camavinga has immense quality and power, but he must learn and gain experience and knowledge for the position in which he plays. He doesn’t have it yet, but he’s only 19 years old.

“Every day that he trains with Modric, Kroos or Casemiro is a master’s degree - I’m sure he learns more from what he sees his team-mates do in training than from what I tell him.”

On Valverde, who has also been deployed as a right-sided forward, Ancelotti said: “Valverde is showing all his qualities. Whenever he has the chance, he has to shoot because he can shoot incredibly well. He also brings physicality and verticality, which is rare in a modern midfielder.”

That is not to say there will not be any investment this summer — Real have been heavily linked with 22-year-old Monaco midfielder Aurelien Tchouameni and no doubt there will be key signings after missing out on Mbappe.

But Ancelotti is confident about the future. “We have the ideal relief for these legends of the club,” he said.

I wanted to stay in France, says PSG’s Mbappe after rejecting Real

Amid Real’s interest, Mbappe signed a contract extension with PSG last week that will keep the 23-year-old tied with the French club until 2025.
Sports
6 months ago

Benzema, 34, netted a first-half header from Vinicius' pass to match Raul's 323 goals, with only Cristiano Ronaldo (450) scoring more for the club.
Sports
6 months ago
Post a comment
by By Alex BysouthBBC Sport
Football
25 May 2022 - 21:00
Read The E-Paper