'Basmati' babes have not spared sportsmen either

•Cases abound of local sports personalities who have unwittingly fallen into the trap of the venturesome daughters of Jezebel known to lace drinks with stupefying drugs obtained from rogue chemists.

•It's imperative for local athletes to steer clear of these vicious women who are ravenous for their wealth. 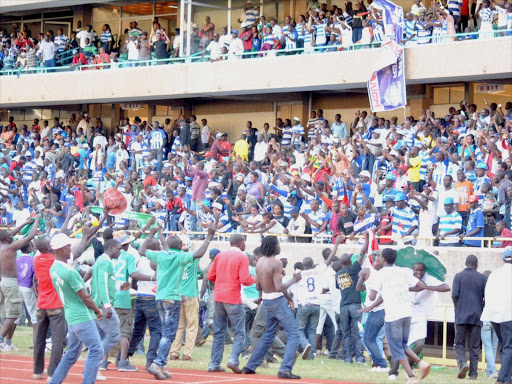 A file photo of AFC Leopards and Gor Mahia fans mocking each other at a previous derby at Kasarani Stadium.

The country has been gripped by the engrossing narrative of a polygamous man who established a vast financial empire on the strength of 50 daring and manipulative women.

Samuel Mugo Muvota was gunned down in broad daylight in Nairobi on May 16. Muvota, who was driving a Honda CRV, was accosted by a lone gunman at Mirema Springs apartments in Kasarani Sub County at around 4 pm.

The armed man pumped at least six bullets into Muvota’s chest before escaping the scene in a getaway car. Preliminary investigations have unearthed numerous cases where Muvota recruited women to spike revellers’ drinks in clubs across the city.

The women were then given express instructions to rummage through the homes of the victims for valuables and cash. They would also milk bank accounts dry at the slightest opportunity.

As I watched the news, it immediately struck me that the local sports scene has not been spared the agony either.

Unknown to many, the infamous ‘Basmati Babes’ had haunted and tormented Kenyan sports personalities long before their cover was blown off and their activities brought under scrutiny.

Cases abound of local sports personalities who have unwittingly fallen into the trap of the venturesome ‘daughters of Jezebel’— known to lace drinks with stupefying drugs.

They capitalise on their gorgeous looks to prey on unsuspecting male athletes while groping for the perfect moment to swoop down on their hard-earned fortune with the precision of a cut from a Zoro knife.

Indeed, many athletes have been victims of the Pyrrhic victory where they come back home with their stunning dream hunts, who blindly lead them to their financial waterloo.

Other than suffering devastating financial setbacks, the general performance of an affected athlete also takes a deep plunge owing to time squandered in energy-sapping amorous episodes.

So entrenched is the vice that only last year, Athletics Kenya contemplated a comprehensive plan to hold seminars to enlighten athletes on financial management.

Although relatively less financially rewarding compared to athletics, the local football scene has recorded the most number of casualties.

Sources revealed that some well-known female fans have established the habit of attending local top-flight matches to prey on unsuspecting football stars.

The said female fans dress to kill — from skimpy sensuous skirts that reveal too much, to tops that expose their cleavage — they let their intentions loose the moment they step into the stadium. Even foreign coaches and players are not spared the agony.

The fans are resilient in their well-calculated moves and hardly throw in the towel until they get the job done. A couple of years ago, two Kenyan Premier League players were caught up in the middle of a scramble for a woman who dated both of them for vested interests.

The woman ultimately dumped one player to put up with the other. Indeed, Kenyan footballers are known to revel at wild parties after earning their match allowances and that’s where they are easily ambushed.

It’s imperative for local athletes to steer clear of these vicious women who are ravenous for their wealth.