KEEN TO SOLDIER ON

•The 40-year-old, whose contract expires this summer, was introduced for the final minute of extra time at Hampden with Rangers 2-0 up.

•But the veteran custodian gave nothing away on his future amid suggestions his glittering career might be over. 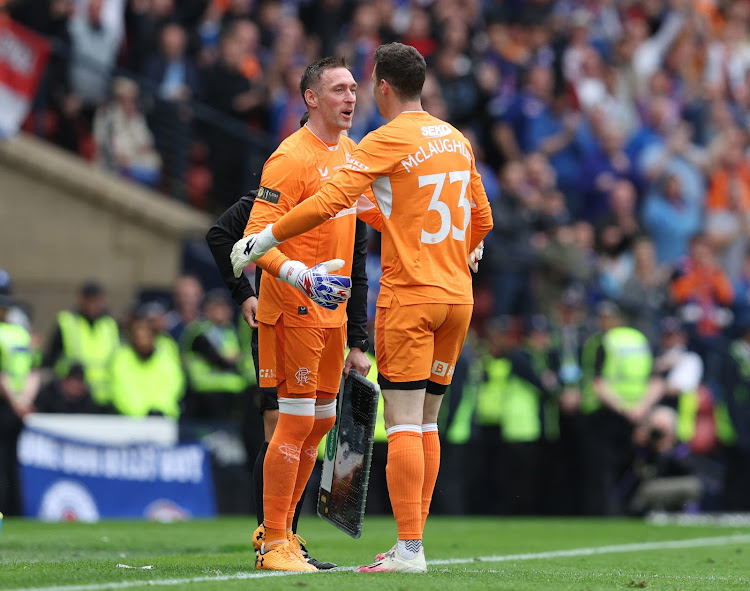 Rangers goalkeeper Allan McGregor refused to rule out staying on at Ibrox after a late cameo appearance in his side’s Scottish Cup win over Hearts.

The 40-year-old, whose contract expires this summer, was introduced for the final minute of extra time at Hampden with Rangers 2-0 up.

But the veteran custodian gave nothing away on his future amid suggestions his glittering career might be over.

“Nobody said that (it was my last game for Rangers),” he told Premier Sports.

“I’ve not thought about it (the future). The last few months have been hectic since the last international break. All I was focusing on was the next game. I’ll speak to the club soon enough and we’ll take it from there.

“I’ll have a holiday and have a pre-season and we’ll see how it goes.”

Rangers boss Giovanni van Bronckhorst confirmed on Friday that McGregor’s deputy Jon McLaughlin would start at Hampden, as he has throughout the competition. However, there was no indication that the former Scotland international would play any part, with the manager revealing afterward that McLaughlin had agreed to “give up his place” to allow his team-mate to take the fans’ acclaim.

“It was a nice gesture,” said van Bronckhorst. “We are going to sit down with Allan and see how the future is. I’m happy that he can lift a trophy at the end of the season.

“You don’t normally have players of Allan’s age. It’s amazing how he has performed this season. The talks will go on once the season has ended. We have to see in the next week what will happen.”

Since McGregor’s return to Ibrox in 2018, his inspiring form has been integral to the Rangers’ domestic and European success.

Last season, he was part of a title-winning backline that conceded a record-breaking 13 goals throughout the 38-game Premiership season. However, that domestic form took a dip this term.

On average, McGregor conceded every 243 minutes in the league as the title was one— that has been slashed to 104 this time. His save percentage also dropped - from 85 percent to 66 percent — with 15 Premiership goalkeepers boasting a better record.

The veteran has reserved his top form for Europe, though, proving he is still more than capable at the top level.

McGregor’s Europa League save percentage almost doubled this season - from 40 percent to 73 percent— while his minutes-per-goal-concession average rose from 54 to 88.

Considering nine of his 15 European games this term were in the knockout stage against high-calibre opposition, those are very encouraging numbers for a keeper of any age.

McGregor will know himself when the time is right to finish - but if that time isn’t now, Rangers will continue to reap the rewards of having a top goalkeeper at their disposal.

Former Rangers goalkeeper Neil Alexander: Allan’s done fantastic for the Rangers. In the European run, he was outstanding. It would be no disgrace to hang up the gloves on the back of the last two seasons. He’s been a true, proper legend - and he would be bowing out at the top.

Ex-Rangers striker Steven Thompson: McGregor has been such an incredible servant to Rangers. It was such an emotional moment for him. He’ll go down as one of the greatest goalkeepers in Rangers’ history, if not Scottish football.

Former Rangers winger Neil McCann: It was a beautiful moment for McGregor. It looks like it could have been his swansong and what a fitting way to go.

Ex-Scotland forward James McFadden: That all but confirms it for me that Allan McGregor will be retiring. A tremendous goalkeeper who has had a brilliant career. He will be a loss to the Rangers and what a way to bow out. Former Rangers defender Alan Hutton: He’s a fantastic goalkeeper, who has served this club so well. What a player he has been for Rangers.

Crestfallen Rangers left to ‘start from zero’ after final loss

Former Barcelona and Netherlands full-back Van Bronckhorst said Rangers had shown that they had the quality to play at the elite European level.
Sports
1 month ago

Big five in action as KPL title race hots up

Homeboyz — currently top the standings with 59 points — must overcome Gor to stay clear of Tusker who are breathing heavily on their necks with only ...
Sports
1 month ago
by BBC
Football
22 May 2022 - 21:00