AFC Leopards fans have been the best this season

With their trademark blue and white replica club jerseys and the stentorian Isukuti drum beats, Ingwe fans undoubtedly light up the Kenyan Premier League matches by shaking and rolling their shoulders as stylish young women in the group gyrate their hips to the enchanting and mind-blowing beats.

•Most importantly, they inject some oomph into the otherwise mundane streets, before and after matches.

•A torrid start to the season and a lackadaisical run in the course of their upheaval journey has denied them a perfect opportunity to end their 20-year title drought. 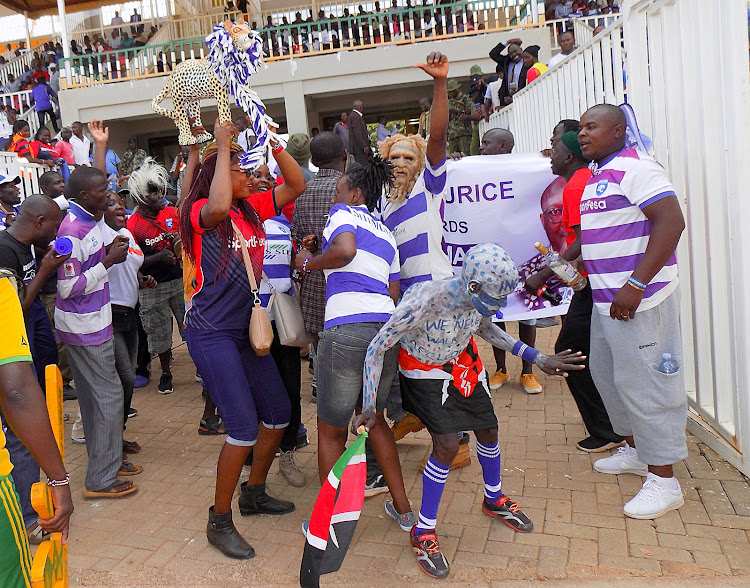 AFC Leopards supporters have been in a class of their own this season, bringing back the pomp and glamour to our colorless stadia.

Most importantly, they inject some oomph into the otherwise mundane streets, before and after matches.

The Isukuti team comprise vibrant and stylish young men and women who electrify the stadium by shaking and rolling their shoulders as well as gyrating their hips to the enchanting beats, as the rest of the battalion bellow out a well synchronized chorus at the stands.

This afternoon, Leopards are urging their fans to flock the stands again as they face debutants Talanta at Nyayo Stadium in one of the final crunch ties that might as well decide their fate in the top ten bracket.

“It's match day. Our second last home match of the season. Let's all turn up at Nyayo Stadium and support the team. Show some love for AFC Leopards,” read a post on the club's official Facebook page.

Whereas their supporters have never disappointed this season, the playing unit has failed to rise to the occasion many a times.

A torrid start to the season and a lackadaisical run in the course of their upheaval journey has denied them a perfect opportunity to end their 20-year title drought.

They are currently eighth on the log with 42 points and must constantly look over their shoulders to fend off potential threat from the pack of predators who are hot on their heels and equally interested in a top-ten finish.

Kimani has asked his charges to remain level-headed and resist the urge of popping the champagne corks too early in the day.
Sports
1 month ago

Raila also said there are plans to hire well qualified coaches who will be tasked with raising local football standards to international levels.
Sports
1 month ago
by TONY MBALLA
Football
21 May 2022 - 13:47