Kenyan football has been killed by people who majestically march into some dingy local pubs to shout their voices hoarse in support of foreign teams instead of streaming into local stadia to rally behind our local lads.

•The scenario has drastically transformed and every budding footballer in the country wants to be known as Ronaldo, Messi, Benzima...name it. 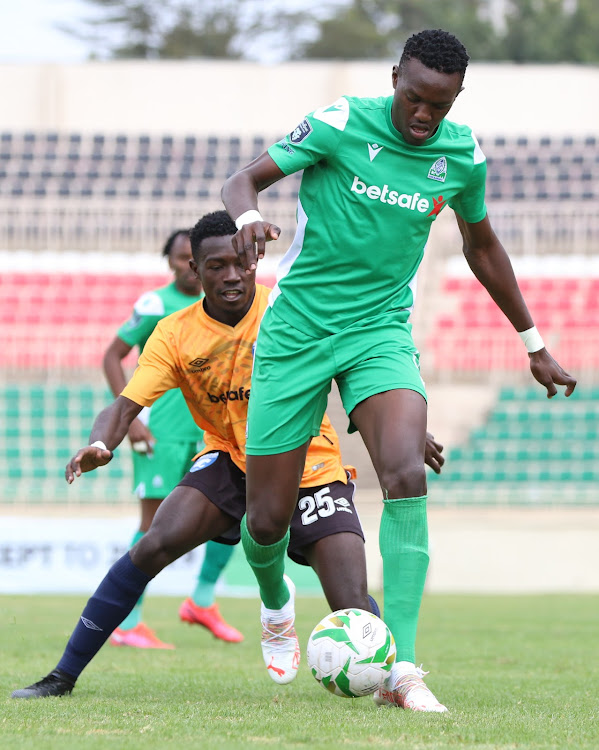 Gor Mahia's Frank Odhiambo shields the ball from Lewis Bandi of AFC Leopards during a past match at Nyayo Stadium.
Image: ERICK BARASA

Let me throw you into the deep end of a football challenge. Name five Kenyan footballers and the clubs they are featuring for in this season's Kenyan Premier League.

Have you suddenly gone blank? If you are tearing your hair out in deep retrospection and squinting abnormally in a futile effort to recall the names of the players and their clubs, then you are not a real football darling.

You are an imposter who has proficiently mastered the art of pulling the wool over the eyes of real fans by playing along for selfish gains.

Indeed, you might be gladly and willingly riding on the wave of the world's most popular sport to impress friends and workmates. Worst still, you might have immersed yourself into football to reap handsomely from the gambling venture.

Count yourself on the ballooning list of self-seekers who are doing a great disservice to our nation by promoting foreign business at the expense of local talent.

You are misleading an entire generation. Gone are the days when Kenyan youngsters would name themselves after local football luminaries.

The scenario has drastically transformed and every budding footballer in the country wants to be known as Ronaldo, Messi, Benzema...name it.

Who should be blamed for the sudden death of Kenyan football? Is it Sports Cabinet Secretary Amina Mohamed, former Football Kenya Federation honcho Nick Mwendwa or the Caretaker and Transition Committees?

None of the above. I place the blame right at the feet of some confused elements in this country who eagerly wait for the weekends to slip into replica jerseys emblazoned with the names and logos of foreign teams and then majestically proceed to some dingy local pubs to shout their voices hoarse instead of streaming into local stadia to support local teams.

The country abounds with self-professed football enthusiasts who possess an in-depth knowledge of the major foreign leagues especially the English Premier League, but who cannot name even one single player in the Kenyan Premier League.

Yet, these are the same people who employ all sorts of filthy invectives to castigate the national team's shoddy performance on the international stage.

How do you expect our local footballers to succeed when you are betting to boost the fortunes of foreign players and leagues and you constantly deny local clubs revenues by failing to attend matches?

Ask some of those windbags who bellow out praises about Arsenal and Manchester United to name a football team plying trade in the local league and they will be dumbstruck.

They know who won the English Premier League, the Spanish LaLiga, the French Ligue 1 and some nondescript leagues.

That's how egoistic and individualistic people have become. Instead of laying the ground for our children to succeed as footballers, they seem to be engrossed with fulfilling their own desires.

The same foreign football teams you seem to adore so much have blatantly refused to offer our sons opportunities claiming they come from countries that are lowly ranked.