Everton show they know how to win away

They came back, got another goal and held on for their first away win since August.

• It could have affected them badly this time too, and it might even have been the start of another collapse — but instead it actually galvanised them.

• Dyche was right then, but it’s not the case anymore. Everton changed the narrative at King Power Stadium, and got themselves an absolutely massive result. 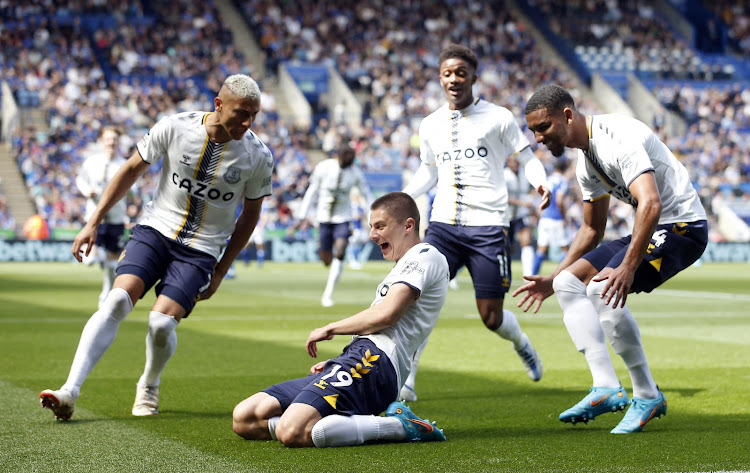 We’ve got used to seeing Everton fall apart when things go wrong for them on the road this season, but Sunday’s crucial win at Leicester was a different story.

After going ahead with a stunning Vitaliy Mykolenko strike, Everton made an awful error to let the Foxes equalise and then saw the defender responsible, Yerry Mina, go off injured a few minutes later.

That was nothing new in what has been a tough campaign for them - the Toffees are down near the bottom of the table because they have made plenty of costly mistakes at the back before, and that area of the team is where they have had a lot of injuries as well.

It could have affected them badly this time too, and it might even have been the start of another collapse — but instead it actually galvanised them.

They came back, got another goal and held on for their first away win since August.

This is the Everton team who then Burnley boss Sean Dyche said ‘didn’t know how to win’ when they led the Clarets at half-time at Turf Moor before collapsing, just over a month ago.

Dyche was right then, but it’s not the case anymore. Everton changed the narrative at King Power Stadium, and got themselves an absolutely massive result.

Just as in their win over Chelsea last weekend, Everton had to rely on some resolute defending, as well as some more outstanding saves from Jordan Pickford, to get the points.

The whole team stuck together and showed a great attitude to get across the line, which hasn’t always been the case during the past few months. It was gritty, and gutsy — and certainly not pretty, but then it doesn’t have to be when you are scrapping to avoid relegation.

What mattered was that the Everton players gave everything and it was the same with their supporters in the stands, who travelled to Leicester in such numbers and played a huge part in them getting the win.

Sometimes it is the fans who get their side going with the noise they make, or vice versa because of what they see happening on the pitch. This time, with Everton’s performance, the two seemed to go hand in hand.

They kept responding to each other and the Everton players dug in and held out to complete what was a great few days for them — especially with Burnley and Leeds being beaten this weekend.

Everton’s situation looked extremely bleak before they played Chelsea on 1 May, when they were five points adrift of safety.

Two games and two wins later, their hopes of staying in the Premier League look a lot more positive now.

Pickford has been the outstanding performer for them on the pitch but, apart from him, it has been a real collective effort.

They are still only a point clear of third-bottom Leeds, so it is not the time to be patting each other on the back just yet but, with four games to go, the most important thing is that their fate is in their own hands.

It also helps that Frank Lampard’s side also have a more favourable fixture list than the teams below them. Their next game, away at already-relegated Watford on Wednesday, has to be seen as an opportunity to keep up this momentum and move further clear, but then they have two home games to come and we know what kind of atmosphere they will get at Goodison Park.

Just one more win might be enough to keep them up, but two almost certainly will be.

The pressure is on Leeds now

Everton cannot relax yet but the pressure is hugely on Leeds now, after they dropped into the bottom three.

I can’t quite explain what happened to Jesse Marsch’s side in their defeat at Arsenal, because they were actually better after their captain Luke Ayling was sent off.

Leeds had already made things difficult for themselves when Illan Meslier gifted Arsenal their first goal after only five minutes, but things quickly got worse for them.

Ayling’s tackle on Gabriel Martinelli was stupid because it not only left his side down to 10 men for more than an hour at Emirates Stadium, it means he is suspended for the rest of the season.

Leeds also have two home games to come, but they have the added problem of a much worse goal difference than Burnley and Everton, which gives them even more work to do to stay up.

They are clearly missing Patrick Bamford upfront but you can see how Everton have struggled with their own injuries and the Clarets have problems there too — they could be without their two first-choice centre-halves for the run-in after James Tarkowski joined Ben Mee on the sidelines this weekend.

It is part and parcel of a relegation battle, unfortunately. Every team down there has a hard-luck story to tell about what has happened over the past nine months, but it is the next two weeks that will decide who gets a happy ending or not.

Lampard, whose team are in the relegation zone, has until May 9 to respond to the FA.
Sports
2 weeks ago