With 12 minutes remaining, Moyes was sent from the touchline for angrily booting the ball back towards the ball boy who had retrieved it.

•Uefa will assess the match reports from delegates before deciding whether to take any further action against Moyes over the incident.

•He will have to serve a one-match ban because of the red card but there is a possibility that could be extended if Uefa feel it is warranted. 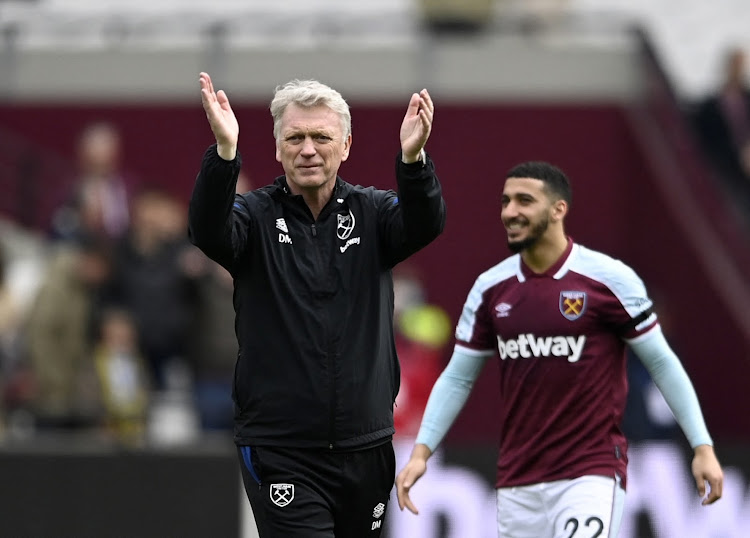 West Ham boss David Moyes apologised for kicking a ball at a ball boy after he was sent off at Eintracht Frankfurt.

With 12 minutes remaining, Moyes was sent from the touchline angrily booting the ball back towards the ball boy who had retrieved it.

"I have to apologise for kicking the ball," Moyes said.

"The ball boy left it short nicely on the volley for me. I apologise for it. It didn't hit him, I think I bent it past him."

Uefa will assess the match reports from delegates before deciding whether to take any further action against Moyes over the incident. He will have to serve a one-match ban because of the red card but there is a possibility that could be extended if Uefa feels it is warranted.

It is also likely Eintracht will be charged by Uefa for the pitch invasion that followed the final whistle.

Moyes, whose team were beaten 1-0 on the night and 3-1 on aggregate, said West Ham lost the tie in the first minute of the first leg last week.

Ansgar Knauff gave Frankfurt the lead after 49 seconds in a 2-1 win in London - and set up Rafael Borre for the only goal at Deutsche Bank Park.

"Let's be honest, we probably lost the game in the first few seconds at London Stadium when we conceded," Moyes said.

"We were chasing the game since."

Frankfurt will now face Rangers in the final, while West Ham's wait for a trophy goes on to the 43rd year. They are currently seventh in the Premier League, which would bring them a Europa Conference League spot.

"I am really proud of the players. How they played with 10 men was fantastic. They stayed in it. Other teams would have folded and lost two or three," Moyes said.

"I thought we had better chances than Frankfurt. But we congratulate them. They go through, we don't and we give them our best wishes."

He was also less than impressed by the Frankfurt bench's reaction to Cresswell's initial yellow card which got upgraded to red following a VAR check.

"I thought it wasn't great officiating throughout. Aaron has given the referee a decision to make. I was more disappointed with the Frankfurt bench. The whole bench came out, it comes back to haunt you," he said.

West Ham midfielder Declan Rice acknowledged the team's disappointment at the end of a European run that had included wins over Sevilla and Lyon.

"The first goal killed the atmosphere in the first game and it is a mountain to climb from there," he told BT Sport.

"We are gutted in there. We have come so far as a group.

"We had a genuine belief that over two legs they weren't going to beat us. Of course, they are a good side but no way are they better than Sevilla or Lyon.

"The sending-off was probably a sending-off but some of the other decisions were poor tonight. The ref seemed to make every decision go for them. When you have someone against you, you can't do much."

Thousands of Frankfurt fans ran onto the pitch at full-time to celebrate their first European final since 1980.

Hammers right-back Vladimir Coufal said: "I wasn't scared. I've experienced it many times at Slavia Prague. If they attack me, it's their problem, not mine."

Moyes urges West Ham to improve after defeat to Frankfurt

With both teams vying for their first European final in over 40 years, Frankfurt shocked West Ham with a goal in the first minute before adding a ...
Sports
3 weeks ago

West Ham stunned the French side 3-0 in the second leg to advance 4-1 on aggregate and set up a semi-final against Eintracht Frankfurt.
Sports
1 month ago
by BBC
Football
07 May 2022 - 00:00