Time has refined me into a better striker, says Odera

Odera has experienced a stellar form thus far with seven goals and five assists already to his credit.

•Odera, 34, says he is impressed with his fine form this season despite his advanced age, adding he is determined to attain even more if time allows.

•Odera says is looking forward to renewing his two and a half year contract which runs out in June. 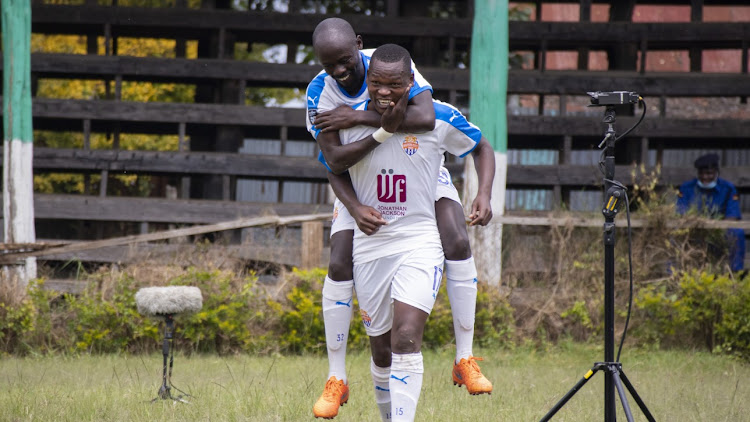 Nicholas Kipkirui celebrates their goal with teammate Ezekiel Odera in a past match.
Image: FILE

There is every reason to believe that mercurial Nairobi City Stars forward, Ezekiel Odera, is basking in one of his most fruitful Kenyan Premier League seasons.

The striker reckons he and his teammates have had a plain sailing season in the country's top tier, where they are currently fourth on the log with 45 points, 10 adrift of leaders Kakamega Homeboyz.

“This has been a splendid season for the team. We have posted impressive results thus far and remain in contention for the title,” Odera said.

“On a personal level, I've also experienced a great season. With seven goals already in the bag and five assists, I've performed much better than the preceding season, where I managed only four goals. I've set a target of 10 goals this time around.”

Odera, who has previously turned out for traditional Kenyan rivals AFC Leopards and Gor Mahia, said they have their sights firmly set on a maiden top-flight title.

“With about eight games remaining, we stand a real chance of winning the title... if we manage to collect maximum points from all the fixtures," said Odera.

“However, I appreciate the fact that doing so won't be a walk in the park — given the calibre of teams we shall be coming up against.”

Odera, 34, says he is impressed with his fine form this season despite his advanced age, adding that time has moulded him into a better striker. Odera says he is determined to attain even more if time allows.

The seasoned goal-poacher is, however, alive to the fact that any dreams of pursuing a career outside the country would be overly ambitious given the limited time he has ahead of him.

“I've already called time on international competition and I wouldn't take up a slot in the national team even if I were to be offered one," he said.

"I've also put aside any ambitions I previously had of playing in the foreign leagues. I mean, they wouldn't consider absorbing me because they usually prefer younger players.”

Odera says is looking forward to renewing his two-and-a-half-year contract, which runs out in June.

“My contract will be expiring in June and I hope to get a new offer. Though my years have advanced, I won't hang up my boots just yet. I believe I'm still strong enough to compete effectively on the pitch,” Odera said.

“I can say that this season is one of the best so far, based on our performance. The team is well motivated due to the support we are receiving from ...
Sports
7 months ago
Post a comment
WATCH: The latest videos from the Star
by TONY MBALLA
Football
03 May 2022 - 05:00
Read The E-Paper