Leopards custodian Levis Opiyo was the toast of the day, after stretching full length to block Lokale's effort from the

•Record champions Gor Mahia and Kariobangi Sharks played out to a barren draw at Thika Stadium. 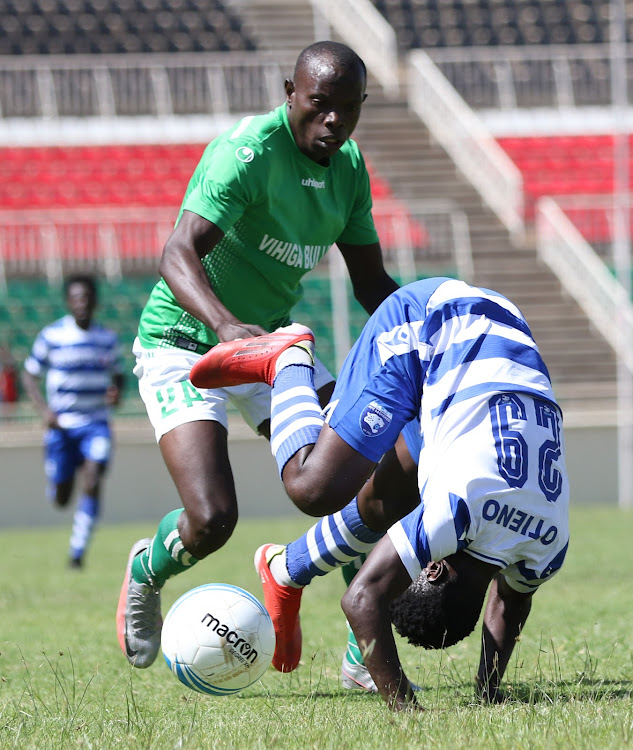 Otieno made the remarks after his charges crushed 2-1 with the spot kick making all the difference in a tension-packed Kenyan Premier League clash.

“That kind of officiating only serves to bring a lot of disrepute to the game of football. In such a situation, it becomes extremely difficult to get a deserving winner at the end of the season.”

Ogwayo awarded the controversial penalty after adjudging striker Victor Omune to have been fouled inside the area.

It was not immediately clear what informed the decision given Omune had just miscued his close-range effort after coming onto the end of John Makwatta's enticing cross inside the six-yard area.

Ogwayo, unperturbed by heated remonstrations by disgruntled KCB players, dug in as Makwatta gladly stepped up to double Leopards' advantage — his fourth goal in five matches.

Omune had earlier fired Leopards into the lead in the 19th minute after being teed up by Nigerian forward Ojo Olaniyi.

Ogwayo later awarded KCB a penalty in the second half only for Sidney Lokale to squander the opportunity barely minutes after netting the bankers' consolation.

Leopards custodian Levis Opiyo was the toast of the day, after stretching full length to block Lokale's effort from the spot.

Leopards head gaffer, Patrick Aussems, was elated with the turn of events, saying his players deserved the win.

“We were the better side throughout the match. We dominated possession and we should have won by a bigger margin only that we were not clinical enough in front of goal,” Aussems said.

“It's quite encouraging to see the team getting better with time and there is no doubt that if we continue with this form, we stand a chance of finishing in the top ten.”

Leaders Kakamega Homeboyz failed to open the gap on second-placed Tusker after settling for a one-all draw with Wazito at Bukhungu Stadium while record champions, Gor Mahia, and Kariobangi Sharks played out to a barren draw at Thika Stadium.

Akwana believes Mathare's woes emanate from deep-rooted financial challenges that can only be addressed through comprehensive reforms, including an ...
Sports
9 months ago

The runaway KPL leaders had their title ambitions slowed down after being held to a two-all draw by Kenya Police at Moi Stadium, Kasarani Annex on ...
Sports
9 months ago

Munro lashed out at the Ministry of Sports for blatantly turning a blind eye to the plight of local clubs in the damning wake of grave financial ...
Sports
9 months ago
Post a comment
by TONY MBALLA
Football
02 May 2022 - 05:00
Read The E-Paper