The Gulf state will host the first World Cup in the Middle East, the first in a Muslim state, and no other tournament has ever been held in the northern hemisphere winter.

• But it also means there will be a real squeeze on Qatar’s limited accommodation market, with organisers estimating 1.2 million fans to visit the country over the 28 days of the tournament.

• Organisers have put caps on the room rates hotels can charge supporters, with three star rates capped at around $120.

November’s World Cup in Qatar will be unlike any other finals that have previously taken place and the logistical challenges facing organisers, from providing enough accommodation to dealing with unruly fans, will only intensify.

The Gulf state will host the first World Cup in the Middle East, the first in a Muslim state, and no other tournament has ever been held in the northern hemisphere winter.

Qatar, which is roughly the size of Jamaica, is also the smallest state to have held soccer’s biggest event, with fans from the 32 competing nations set to watch games at eight stadiums clustered around the only major city — Doha.

On the plus side that means supporters will be able to easily reach all the venues, raising the possibility of watching more than one match in a day — in contrast to recent tournaments in Russia and Brazil where flights were often needed to travel to each venue city.

But it also means there will be a real squeeze on Qatar’s limited accommodation market, with organisers estimating 1.2 million fans to visit the country over the 28 days of the tournament.

Fifa president Gianni Infantino, who inherited the decision to allow Qatar to host the tournament after taking over from his scandal-hit predecessor Sepp Blatter, initially looked at the possibility of other countries in the region sharing hosting duties. 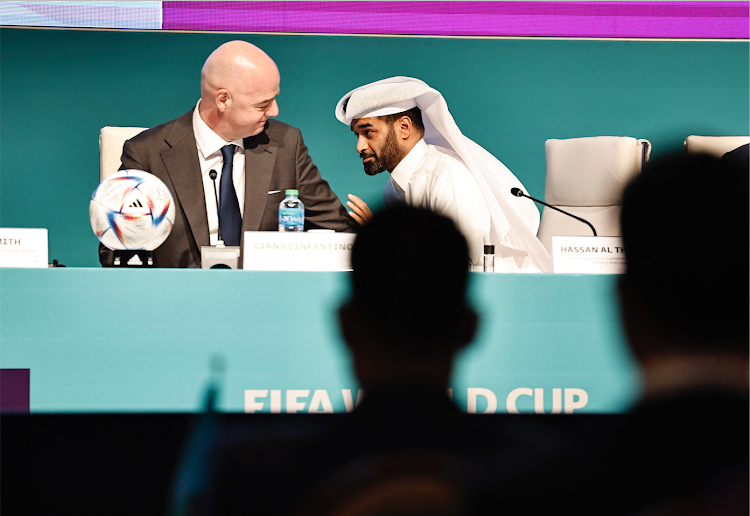 Fifa president Gianni Infantino and Secretary General of the Supreme Committee for Delivery and Legacy, Hassan Al-Thawadi during the Fifa Teams Seminar in Doha, Qatar on April 1
Image: REUTERS

But while that option was eventually ruled out, Infantino is still keen to portray the tournament as a chance for fans to experience the broader Arab world.

“There will be accommodation for everyone who wants to stay in Qatar, but maybe somebody then wants to make a day in Dubai or Abu Dubai or Muscat or Riyadh or Jeddah or whatever in the region and they will have the opportunity to go and visit other countries throughout their stay in this region,” he told Reuters in an interview.

“That is certainly what we also recommend because I think one of the biggest experiences in this particular World Cup... is an opportunity for people to come to a country and a part of the world that they maybe do not know,” he added.

It is a worthy suggestion but is one which is arguably only really an option for those with large pockets, and it contrasts with Qatari organisers’ efforts to make the World Cup accessible for fans with more modest budgets.

Organisers have put caps on the room rates hotels can charge supporters, with three-star rates capped at around $120.

Qatar’s Supreme Committee for Delivery and Legacy has promised 130,000 rooms, including hotels and 60,000 rooms in apartments and villas, plus around 4000 rooms on two cruise ships and the remainder in fan villages.

Officials are also trying to make sure that fans, used to enjoying plenty of beer with their football, have alternatives to the pricey expat hotel bars where a pint of beer can cost around $18.

Although alcohol is normally only available in such settings, special ‘fan zones’ will be set up across the country during the tournament so that supporters can watch games and drink for more familiar prices.

“Alcohol prices will be capped in the fan zones, similar to what was seen at the Fifa Club World Cup in 2019 where a pint was around five pounds ($6.55),” said a source close to the discussions.

The fan zones — and other venues — will have to cope with fans from all 32 countries, in contrast to most tournaments where cities host just two nations at a time before games.

“I believe that having so many nationalities and people coming together and mingling together will be really beneficial, and will also move and elevate the World Cup into a big, big social gathering,” said Infantino.

That gathering might, however, require some skilled security and policing, given football tournaments have had a history of rival supporters clashing.

An FAF statement said it had lodged an appeal with world governing body Fifa, citing “scandalous arbitration” which “distorted the result”.
Sports
3 months ago

Qatar has been heavily criticised over the country’s human rights record.
Sports
3 months ago
by REUTERS
Football
06 April 2022 - 00:00