Qatar has been heavily criticised over the country’s human rights record.

• “Some people have made statements that in my opinion were ill-informed,” Hassan Al-Thawadi told BBC Sport. 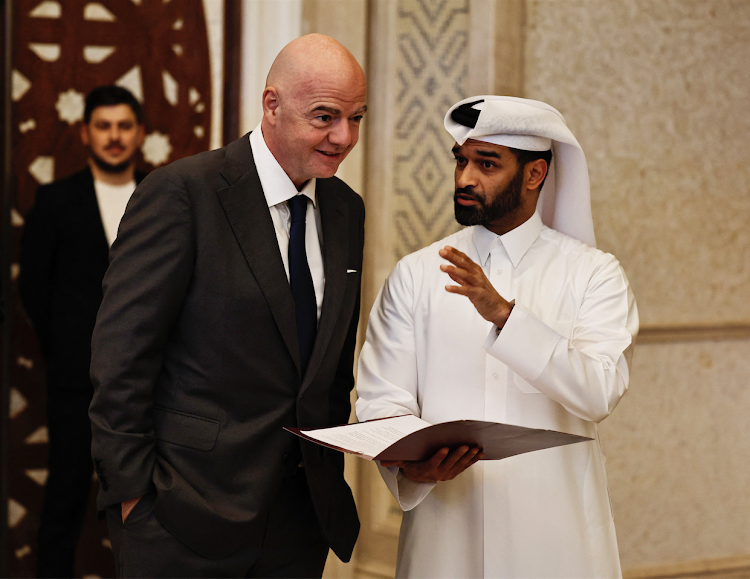 Fifa president Gianni Infantino and Secretary General of the Supreme Committee for Delivery and Legacy, Hassan Al-Thawadi during the Fifa Teams Seminar in Qatar
Image: REUTERS

The secretary general of the 2022 Qatar World Cup says criticism by players and managers has been “ill-informed” and the nation “should not be apologetic” about hosting the tournament.

Qatar has been heavily criticised over the country’s human rights record.

There are strict anti-LGBTIQ+ laws in Qatar, while there are also concerns over the treatment of migrant workers.

“Some people have made statements that in my opinion were ill-informed,” Hassan Al-Thawadi told BBC Sport.

Speaking to BBC sports editor Dan Roan, Al-Thawadi added: “We should not be apologetic over our ambitions to host this tournament because we are football-loving region.

“We are football crazy and football-mad like anywhere else. We have the legitimate ambition to showcase our region to the rest of the world and to change people’s perception of who we are.”

LGBTIQ+ (lesbian, gay, bisexual, trans, intersex, queer or questioning) groups engaging with Fifa over the 2022 World Cup say “issues of concern” remain and reassurances over the safety of LGBTIQ+ people in the Gulf nation “have not been adequate”.

England manager Gareth Southgate has said it would be “a great shame” that some fans will feel they cannot attend the World Cup because of concerns over their safety, while captain Harry Kane said he wants to “shine a light” on the issues surrounding the Qatar tournament.

Netherlands manager Louis van Gaal has suggested holding the event in the Middle Eastern country was about “money” and “commercial interests”.

On how Qatar’s laws can be reconciled with football’s focus on inclusivity and anti-discrimination, Al-Thawadi said: “We have always said everybody is welcome. What we will ensure is that everybody will be safe. Everybody will feel secure.

“[We are] inviting the world to come to visit Qatar, to visit the Arab world, and to understand again, for us, we’re a relatively conservative country, which means public display of affection is something that is not within our culture.

“But hospitality and welcoming people from different parts of the world into our country is part of our culture.”

Amnesty International, who have claimed migrant workers are being exploited in Qatar, have called on England’s players, staff and fans to highlight human rights concerns in the run-up to the World Cup, which begins on 21 November.

A report in the Guardian in February 2021 said 6,500 migrant workers have died in the country since the World Cup was awarded in 2010.

Qatar 2022 dispute these figures but have not commented publicly on them, while the Qatar government said in a statement: “The mortality rate among these communities is within the expected range for the size and demographics of the population.”

Asked if the 2022 tournament was sportswashing, Al-Thawadi said “that could not be further from the truth”.

“If you look at the progress that’s been made over the last 12 years, I think that in itself does away with the concept of sportswashing because actual progress has been made on the ground in relation to that,” Al-Thawadi said.

Qatar says that between 2014 and 2020 there were 37 deaths among labourers building World Cup stadiums — of which 34 were “non-work related”.

Eight new stadiums have been built for the World Cup in Qatar, including the 80,000-capacity Lusail Stadium, which is the biggest venue at the tournament and will host the final.

In 2016, Amnesty International accused Qatar of using forced labour, and since 2017 the government has introduced measures to protect migrant labourers from working in excessive heat, limit their working hours and improve conditions in workers’ camps.

In a statement, player representative organisation Fifpro said “workers continue to be subjected to abusive practices” and that “unscrupulous employers” are “not being held to account”.

“Workers in the most vulnerable positions from countries such as India, Bangladesh, Nepal, the Philippines, Pakistan and some African countries still fear retaliation if they denounce exploitation, unpaid wages and long working hours,” Fifpro said.

“In football terms, it is not even half-time. And each achievement gained for workers remains fragile. Among migrants in Qatar there is widespread fear that when the spotlight on Qatar dims after the World Cup the improvements achieved will peter out.”

On the subject of migrant deaths, Al-Thawadi said: “No matter what you do, nothing is going to compensate the loss of life.

“But we’ve tried our best to be able to provide the relevant compensation for the families.

“What we have done is investigated every death, tried to find the root cause and ensure that these tragedies do not occur, and tried to take steps towards preventing any such tragedies from occurring.”

“Human rights, equality, democracy, the core interests of football, were not in the starting 11 until many years later,” she said.

Klaveness said that last year Norway had debated a boycott of the World Cup, but instead voted for dialogue and pressure through Fifa as the best way to make necessary changes.

Southgate said this month it was a "great shame" there were issues stopping fans going to the World Cup, highlighting the rights of women and the ...
Sports
3 months ago

Pressure mounts on Arnold ahead of Australia's World Cup playoffs

Australia's bid to play in a fifth successive World Cup now rests on beating the United Arab Emirates in Doha in June
Sports
3 months ago
by BBC
Football
01 April 2022 - 18:35