Salah scored the equaliser and set up the winner to inspire the Pharaohs' 2-1 extra-time success over Morocco on Sunday.

•Salah, who has been involved in 64% of Egypt's goals at the Nations Cup - nine of 14 - since he made his competition debut in 2017, paid tribute to Morocco and his teammates.

•Egypt have not won the Nations Cup since their record-extending seventh title in 2010, which was also a third successive triumph. 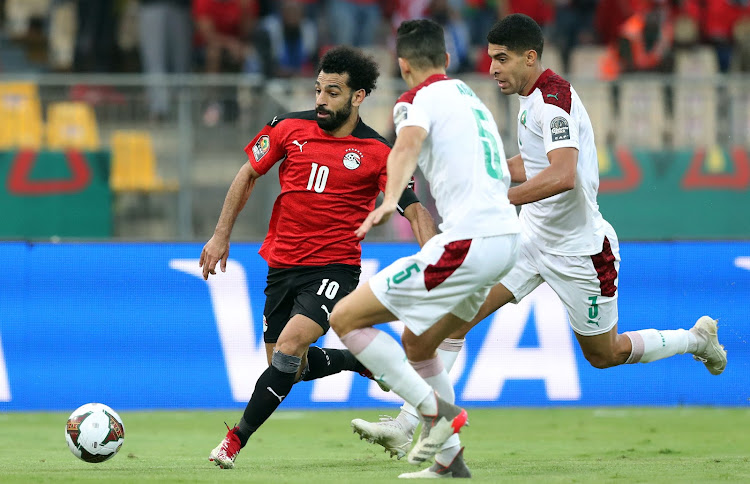 Egypt captain Mohamed Salah says the record Africa Cup of Nations champions must try not to think about the prospect of winning their eighth title after they dug deep to reach the semi-finals.

Salah scored the equaliser and set up the winner to inspire the Pharaohs' 2-1 extra-time success over Morocco on Sunday.

Egypt face unbeaten hosts Cameroon in the last four, a repeat of 2017 final which the Indomitable Lions won.

"We must keep our feet on the ground because we cannot think too far ahead yet," the 29-year-old Liverpool star said.

"We have to prepare for the big match against Cameroon and not start making dreams about the final before the semi-final."

Sofiane Boufal gave Morocco an early lead with a penalty, before man of the match Salah tapped in an equaliser eight minutes after the restart and squared for Aston Villa's Trezeguet to net the winner 10 minutes into added time.

Salah, who has been involved in 64% of Egypt's goals at the Nations Cup - nine of 14 - since he made his competition debut in 2017, paid tribute to Morocco and his teammates.

The forward added: "I think we played a good game against a very good Moroccan team. My teammates do what is necessary for each game and give everything to go as far as possible.

"Playing two games in a row with extra time is not easy, but I can tell you that we are well and we are having a very good tournament."

Coach Carlos Queiroz came under severe criticism from the Egyptian media after the team's opening 1-0 defeat by Nigeria in Garoua.

But the Portuguese has navigated his side out of troubled waters with 1-0 wins over Guinea-Bissau and Sudan in the group stage, before sending Ivory Coast packing in the round of 16 - albeit after a penalty shoot-out.

The 68-year-old praised his players after their quarter-final victory but admits a semi-final against the hosts will be their biggest test in the Central African nation.

Queiroz will also come up against a familiar opposite number in compatriot Antonio Conceicao when they face Cameroon on Thursday (19:00 GMT).

"You ask me about playing one of Africa's biggest teams and I must say that will be a big test for us," Queiroz said.

"So I will play against my friend [Conceicao] in this game like you say a big one in the tournament. I know we must keep the hunger that has taken us to this stage."

This fixture will be a clash between the two most successful sides in the tournament's history, with 12 titles between them.

Seven-time champions Egypt may need to start third-choice keeper Mohamed Sobhi, who came on for his international debut against Morocco.

With number one Mohamed El Shenawy out with injury, stand-in Gabaski hurt himself while tipping Nayef Aguerd's header onto the bar near the end of normal time on Sunday.

"We have a good group with players who fight together in all compartments," Quieroz said.

"Mohamed Salah had a good match today but for me we have to congratulate the whole team. We have several injured players, but all the players gave their best to win this match."

Egypt have not won the Nations Cup since their record-extending seventh title in 2010, which was also a third successive triumph.