The legacy of Johan Cruyff lives on at Volendam

•Volendam have also benefited from a relationship with Inter Milan 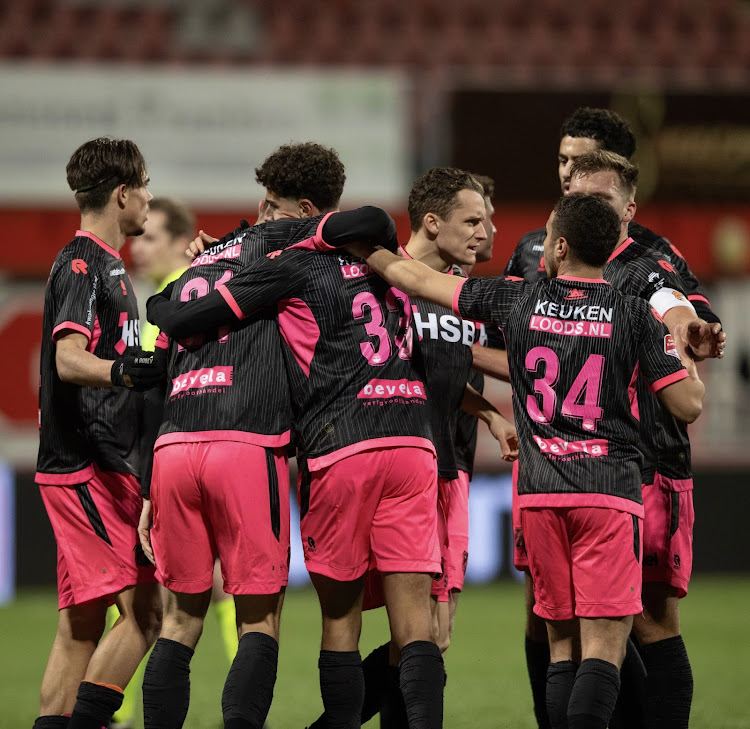 Total football and resplendent orange are synonymous with Johan Cruyff but it may surprise some to find the iconic Dutchman's legacy inspiring a promotion charge in the Netherlands' second tier.

When Wim Jonk returned to manage boyhood club Volendam in April 2019 he brought with him the staff responsible for implementing Cruyff's ideas during the 'Velvet Revolution' at Ajax almost a decade ago.

'Plan Cruyff' was a reform of the Dutch giants' structure and academy system credited with producing the likes of Frenkie de Jong and Matthijs de Ligt, with the focus on playing attractive football, creating a performance culture and developing young players through bespoke individual programmes.

Delivering this vision in Amsterdam was one thing but in Volendam, a fishing village 18 miles north of the Johan Cruyff Arena, the project is vastly different.

'The Other Orange' have traditionally been a yo-yo club, promoted to the Eredivisie a record nine times but not having played top-flight football since 2009.

With poor results and uninspiring football seeing both fans and sponsors lose interest, Volendam were in serious trouble when they called on Jonk and his team, who along with Cruyff had left Ajax in December 2015 following disagreements with the board.

Jonk's first challenge in his new role was to bring supporters back to Kras Stadium.

"They were sitting at the bar and watching the beer tap instead of watching the game," the former Netherlands international tells BBC Sport.

"I wanted to play forward, defend forward, play the three-second rule, third-man options - all those principles to get the players used to what attractive football and attacking football means. It is nice words but there is a lot more behind that."

On his first day in the job, Jonk showed his squad videos of the top clubs in the world and talked about positioning and the ideas he wanted to get across in training.

"The first thing the players said to me was 'yeah, but we are not Barcelona, we are not Manchester United or Manchester City'," adds Jonk, who responded that to develop, fill the stadium and make the club visible again, they needed to "do something special".

Three years into the job, his footballing mantra has taken hold and Jonk's side are on course for promotion, seven points clear and unbeaten in 21 games, having lost just once all season.

"Now if we win 2-1 and it is not the best game, everyone is complaining because we need a three, or four-goal difference," says Jonk. "We are still in progress, there is a lot to learn."

Director of football Jasper van Leeuwen says the next task was developing a more sustainable transfer policy, focusing on discovering "high-potential talents" both inside and outside the club.

The best example of this was Micky van de Ven, a young defender previously overlooked in the under-19s, who flourished under the new regime and was sold to Wolfsburg for £3.15m last summer after Volendam won a legal battle with agent Mino Raiola over the transfer fee.

"We had a three-year plan but the first two years was to create value in the club," says Van Leeuwen. "That was more or less the same thing we did in Ajax - find the big talents either within the club or externally.

"Later on in the third year, which is now, we added some more experienced players to really go for the promotion."

There was no scouting department, or even an office for academy coaches, and Ruben Jongkind says everything from talent development to training methods needed to change.

"We had to spot, select and train a whole new army of coaches and scouts," explains Jongkind, director of Academy and Cooperations at Volendam and responsible for writing and implementing Plan Cruyff at Ajax.

"We needed to find people open to this vision and retrain and educate them.

"The most important thing is we wanted to show that if you work for the beauty of the game, in the end you also get the results.

"You can show that in a big club with a big budget, but it is another thing to show it in a club with only 5m euros as an annual budget for everything."

Producing academy prospects and scouting the right talent is key for Volendam, who are also open to giving "damaged goods" a second chance and have an average first-team squad age of just 22.6 years.

"If the actual level right now is very high he is not coming to Volendam, we have to be realistic," says Van Leeuwen. "If everybody sees the talent in the boy he will go to Chelsea or Barcelona.

"Many people can judge actuality - the whole data thing is based on this - but you cannot measure potential. That is the key.

"If you are very good at assessing the potential level of a player then it is rewarding, because you can take him in before everyone discovers him and you can also very fruitfully develop the player and get into a steep growth curve."

Volendam have also benefited from a relationship with Inter Milan, who were impressed with the way they nurture young talent and have sent several players to the club on loan.

'We have some bigger talents than Ajax'

Bringing Cruyff's theory to fruition in the Dutch second tier has confirmed the trio's beliefs, that scouting well and creating the right environment can help young players reach their potential.

"Working in Ajax, you are more or less certain you have very talented boys, in the academy and around the first team, so nature is taken care of if you scout well," adds Van Leeuwen.

"Then nurture comes into play. How do you actually develop them? Here nature will not provide us out of the 25,000 citizens of Volendam with 10 exceptional talents - this is unrealistic.

"But if you take them in, you give them a podium, give them minutes, give them confidence, develop them individually and you make them feel safe and appreciated, we see they can really explode, even more maybe than we thought.

"That is a hopeful thing, if a smaller club can beat bigger clubs just by working better. For me, it is more rewarding."

Taking Volendam to the next level

Should Volendam win promotion this season, the goal is to survive in the top flight next term and then become an established Eredivisie club.

"If we go there, then we have another challenge to stay there and grow again," says Jonk. "That is more difficult and a new process begins."

There are already plans for a multi-functional new stadium - shaped like a boat, in keeping with Volendam's fishing roots - but Jongkind says promotion will mean having to at least double the club's budget.

"We are thinking a lot about strategies to sell the story and connect with sponsors who can relate to this idea of sustainable development," he says.

"Volendam is sort of like a cult town, everybody knows it in Holland and there are 1.5 million tourists every year from across the world, so there is huge potential to draw bigger crowds than just your own citizens.

"But this step, we know we can only take it if we are in the Eredivisie and connected to the style Wim is teaching the players - we think that combination and the storytelling of all these talents who go a long way after being in Volendam, that can really help grow the club.

"It is possible, we just need time, support and most of all we need people to believe in it."