•The Kenyan lasses have a mouthwatering clash away to Uganda in the Africa Women Cup of Nations qualifiers set for February 17.

•The government has previously come under heavy criticism for turning a blind eye to the plight of our national teams. 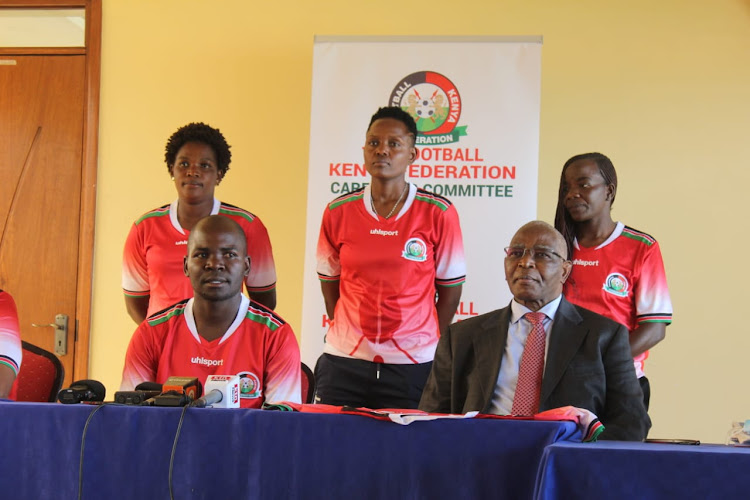 The appointment of the newly-constituted Harambee Starlets technical bench has ushered in a new era and pumped a breath of fresh air into the farcical Kenyan football arena.

More so, the development holds out some ray of hope to the increasingly distraught and disenchanted football enthusiasts, who have endured numerous heartbreaks occasioned by our country's miserable show at the international front.

The Kenyan lasses have a mouthwatering clash away to Uganda in the Africa Women Cup of Nations qualifiers set for February 17. Going by the impressive credentials of their more fancied opponents, Starlets most certainly have a steep mountain to scale.

However, the Football Kenya Federation caretaker committee insists Kenyan fans should be treated to nothing else short of a win, pointing out that the government has since provided an enabling environment for the team's success.

Speaking after unveiling the new tacticians at Nyayo Stadium on Monday, FKF caretaker committee's head of leagues and competitions Ali Amour said they have already set their agenda for the national team and made their expectations quite clear.

“The government has unveiled the best tacticians from the rigorous interview conducted by a panel of eminent persons in the field of football," he revealed.

“The National Youth Service (NYS) has availed buses for the team's use throughout the period they will be in camp. What's even more interesting, is the government's move to insure all the members of the technical bench and the playing unit anytime they are involved in their campaigns."

Amour also promised to mobilise fans countrywide to throng to the stands with the sole objective of handing the team the vital impetus needed to barge past opponents.

“We are also in the process of ensuring the stadiums are filled to capacity anytime Kenya hosts an international match. We will ensure the stands are filled up by Kenya Police, NYS and Kenya Defence Forces personnel. How then do you expect Harambee Starlets not to perform with such plans in place?” asked Amour.

Amour is right. The government has previously come under heavy criticism for turning a blind eye to the plight of our national teams.

Now that such support has eventually come through, it behooves the team to justify it when they face Uganda in two weeks.

Gladly, Amour has assured that all the national teams will receive similar treatment, which is quite encouraging.

The newly-appointed Harambee Starlets assistant coach Ann Aluoch echoed Amour's sentiments, saying the kind of support the players have been accorded will fire them to unprecedented heights.

Hopefully, the zest being exhibited by the FKF caretaker committee in righting the wrongs of football in our country will not fizzle out with time as has been the case in the past where officials ushered into office display enthusiasm and energy that eventually diminish.