The Black Stars were furious that Gabon scored after opting not to return the ball when Ghana put it out of play as midfielder Daniel-Kofi Kyereh went down injured.

•A shoving match broke out on the pitch at full-time and Ghana's Benjamin Tetteh was shown a red card.

•Ghana have just one point, with Gabon on four and Morocco on the maximum six from two matches after defeating tournament debutants the Comoros 2-0 earlier in the same Stade Ahmadou Ahidjo in Yaounde. 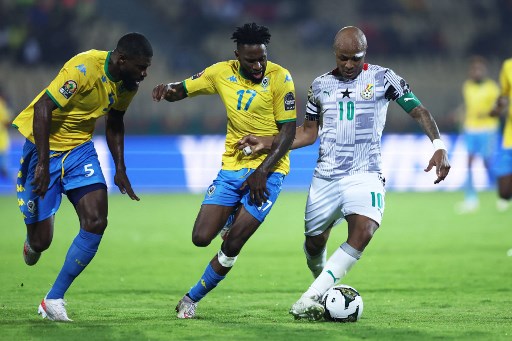 Ghana captain Andre Ayew dismissed Gabon as a "small team" as a controversial late equaliser saw Friday's Africa Cup of Nations clash between the sides finish 1-1 after title contenders Morocco secured their place in the last 16.

Ayew's fine early strike had the four-time champions on course to claim their first win in Group C only for Jim Allevinah to blast in a superb 88th-minute equaliser that put Gabon on the brink of the next round but left Ghana's hopes on a knife-edge.

The Black Stars were furious that Gabon scored after opting not to return the ball when Ghana put it out of play as midfielder Daniel-Kofi Kyereh went down injured.

"It was very small of them, but then that is how it is with small teams," Ayew said.

"We put the ball out of play, and it is fair play in football to give the ball back. Had they done that they would not have scored. They didn't have any chances."

A shoving match broke out on the pitch at full-time and Ghana's Benjamin Tetteh was shown a red card.

It was a fine result for Gabon who were again without star striker Pierre-Emerick Aubameyang and midfielder Mario Lemina.

The duo missed the team's opening win over Comoros after testing positive for Covid-19 and sat out this match after some residue from their infection was detected in their negative test on the eve of the game.

Ghana have just one point, with Gabon on four and Morocco on the maximum six from two matches after defeating tournament debutants the Comoros 2-0 earlier in the same Stade Ahmadou Ahidjo in Yaounde.

Selim Amallah gave the 1976 champions an early lead and then set up substitute Zakaria Aboukhlal to seal the win a minute from time.

In between, Morocco were regularly frustrated as Nayef Aguerd hit the underside of the crossbar with a header and Comoros goalkeeper Salim Ben Boina produced some heroic saves.

Boina, who plays in France's amateur regional fifth tier, produced a remarkable quadruple save on his line and kept out a late Youssef En-Nesyri penalty.

Morocco need just a draw against Gabon to finish as group winners while the Comoros, the Indian Ocean island nation, are still looking for their first goal and point at their first-ever Cup of Nations.

Goals have been few and far between throughout the Cup of Nations so far, with just five of the 18 matches played featuring more than a single goal.

After losing the 2019 final to Algeria, Senegal have high hopes of finally winning a first continental title in Cameroon but they needed a 97th-minute Sadio Mane penalty to beat Zimbabwe 1-0 in their opening game and on Friday they drew 0-0 with west African neighbours Guinea in Bafoussam.

As Mane came up against his Liverpool teammate Naby Keita, the drab draw in the capital of Cameroon's West region left both sides well-placed to qualify from Group B.

Senegal and Guinea sit on four points while Malawi are just behind them after coming from behind to triumph 2-1 against Zimbabwe.

Appearing at only their third Cup of Nations, Malawi's Flames claimed just their second-ever win at the finals and will go into their last game against Senegal with a chance of making the knockout stages.

Ishmael Wadi headed Zimbabwe in front in the 38th minute but Frank Mhango of Orlando Pirates quickly equalised and then scored the winner just before the hour mark.

While Malawi dream of reaching the knockout phase for the first time, Zimbabwe have failed to win any of their last eight games at the AFCON finals.

Warriors coach Norman Mapeza admitted their chances of making the last 16 were slim, saying "our only hope is to qualify as a third-placed team and to do so we must beat a good Guinean team convincingly".

There are just two games on Saturday, with Nigeria playing Sudan and Mohamed Salah's Egypt, the record seven-time champions, playing Guinea-Bissau in Garoua in Group D.

Morocco overcome Comoros to reach last 16 at Cup of Nations

Selim Amallah scored after 16 minutes and Zakaria Aboukhlal struck at the final whistle to ensure the win after Youssef En-Nesyri had an 82nd minute ...
Sports
4 months ago

The Egyptian will be missing for the rest of the month as he leads his country at the Africa Cup of Nations.
Sports
4 months ago
by AFP
Football
17 January 2022 - 00:00