Norwich off the bottom with 2-1 home win over Everton

An own goal by Michael Keane and Adam Idah's close-range finish in the space of two minutes in the first half broke Norwich's long goal famine.

•While Everton have 19 points from 19, a ninth loss in their last 12 league games will intensify the pressure on Benitez.

•Norwich will visit 17th-placed Watford, who they trail by a point albeit having played two games more, on Friday. 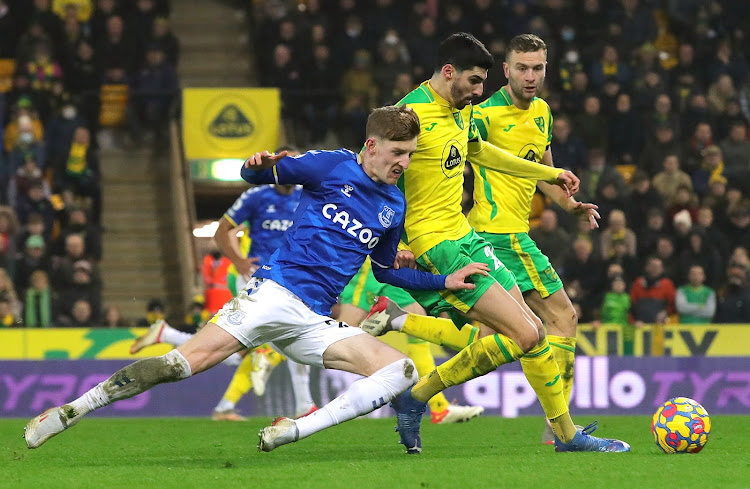 Norwich City threw themselves a lifeline in their battle against relegation but sucked Everton into the mire thanks to a 2-1 victory in the Premier League on Saturday.

An own goal by Michael Keane and Adam Idah's close-range finish in the space of two minutes in the first half broke Norwich's long goal famine to put them in control.

Everton fans vented their fury at manager Rafa Benitez but were given something to cheer when Richarlison halved the deficit on the hour mark to set up a tense finale.

Norwich had to endure seven minutes of stoppage time as Everton desperately searched for an equaliser but Dean Smith's struggling side held on for their third league win of the season to move off the foot of the table.

Norwich moved to 18th with 13 points from 21 games, above Newcastle United (12 from 20) and Burnley who sink to the bottom with 11 points albeit having played only 17 matches.

While Everton have 19 points from 19, a ninth loss in their last 12 league games will intensify the pressure on Benitez.

A shambolic first half for the visitors proved too much for one Everton fan who raced onto the pitch while another unfurled a banner saying "Benitez Get Out of Our Club".

Norwich fans, who had seen their side lose six successive games without scoring before Everton's arrival, joyously sang "Can we play you every week," to the visiting fans.

"We conceded two goals through our own mistakes and that makes it a mountain to climb for us," Benitez said.

"We have to stay professional, concentrate on the next training session and match. I am disappointed that we don't learn and we keep making the same mistakes."

After apparently forgetting how to score a goal, Norwich suddenly found the net twice in 90 seconds.

They had started in confident fashion and took the lead in the 16th minute when Josh Sargent delivered a low cross towards the near post and Keane stuck out his foot to slice the ball past his own goalkeeper Jordan Pickford into the corner.

Norwich fans had not even stopped celebrating that good fortune before their side won the ball on the halfway line and Brandon Williams played in Adam Idah who managed to poke a shot past England international Pickford.

Benitez sent on Richarlison in the 54th minute and he gave them hope by pulling a goal back with an overhead kick.

But Norwich also had late chances and Milot Rashica hit the post with the last kick of the game after a breakaway.

For Norwich boss Dean Smith, who took charge after Daniel Farke was sacked in November, the victory was a relief.

"I have not looked at the table for about two months. It's about where you finish at the end of the season," the former Aston Villa manager said. "We will take each game as it comes and the next one against Watford is a big one."

Norwich will visit 17th-placed Watford, who they trail by a point albeit having played two games more, on Friday.

Arsenal had asked the league on Friday to delay the derby - the 21st match to be called off this season.
Sports
4 months ago