From Tonnerre or 'Thunder' in French to names like Ocean, Panthere (Panther) and Lion Blesse (Injured Lion), no country names its clubs quite like the land of the Indomitable Lions.

•For a long time, the leading team in the Central African nation was Canon of the capital Yaounde.

•But the most powerful side in town is Union, who were created in 1955 in the district of New Bell and have been national champions five times and African champions once, in 1979. 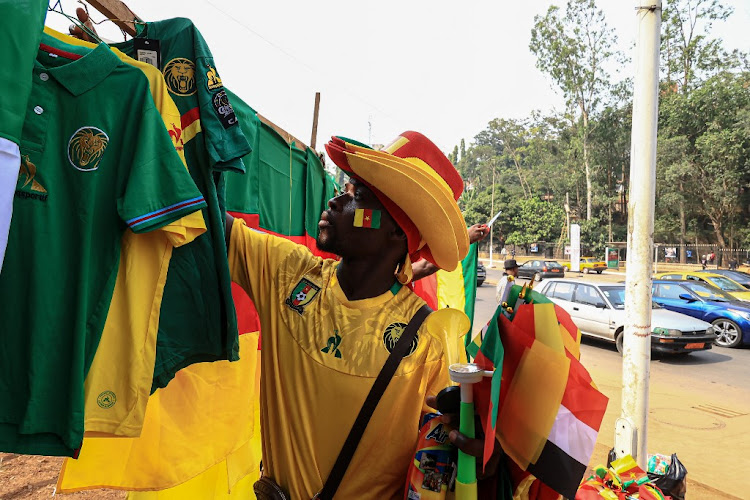 A vendor sorts out the Cameroon football attire he is selling in Yaounde on January 5 ahead of the Africa Cup of Nations which starts on January 9
Image: AFP

Africa Cup of Nations host Cameroon is a football-mad country with a rich history at the international level but also a lively domestic scene of clubs with some of the most colourful names imaginable.

From Canon, which needs no translation, to Tonnerre, or 'Thunder' in French, via names like Ocean, Panthere (Panther) and Lion Blesse (Injured Lion), no country names it clubs quite like the land of the Indomitable Lions.

For a long time, the leading team in the Central African nation was Canon of the capital Yaounde.

Founded in 1930, "they owed their name to the weapon used by the French to beat the Germans, the first colonisers of Cameroon, during World War I," explains Germain Noel Essengue, who covers sport for national broadcaster CRTV.

Canon, who wear red and green, remain the traditional giants of the Cameroonian game, having won 10 league titles — most recently in 2002 — and been African champions three times between 1971 and 1980.

Tonnerre Kalara Club are Canon's great rivals in Yaounde, created in 1934 by Omgba Zing, who was one of the founders of Canon but departed after an internal squabble.

"Kalara means book in the Ewondo language, and the idea was that Kalara would be the book that taught Canon how to play football," explains Philippe Boney, a journalist with the channel Vision 4.

As another journalist, Naja TV's Jean-Bruno Tagne, puts it, the name of a club "conveys a certain power".

As an example, in Cameroon's economic capital Douala, the Caiman club were originally called 'Lune', which translates as Moon -- the name was changed after a defeat at the hands of their great rival Leopard.

The reptile seemed better suited to frightening the big cat than the moon.

Football in Cameroon started in the port city where each neighbourhood had its own club, including Oryx who won the first African Champions Cup in 1965, an oryx is a type of antelope as well as Leopard and Caiman.

But the most powerful side in town is Union, who were created in 1955 in the district of New Bell and have been national champions five times and African champions once, in 1979.

"They came from what was a melting pot of people from the west of Cameroon, Hausa merchants from the Sahel and Beti from the Centre," recalls Franck Happi, the former club president.

That melting pot, he says, explains "the union and the handshake on the club's badge, and the white colours which represent the foreigner. At the stadium they shout 'Go on the foreigners!'"

In the West Region, home of the Bamileke people, there are also clubs with melodious sounding names.

The city of Bafoussam, which is hosting matches at the Cup of Nations, is home to Racing, four-time champions who were born in 1958 from a merger between one club from a catholic mission, Lynx, and another from a protestant mission, Diamant, or 'Diamond'.

But the region is also home to Royal Eagle of Menoua, the name of the river running through the town of Dschang, and Bamboutos of Mbouda, named for a group of volcanoes.

The 'Injured Lion' hail from nearby Fotouni, while Fovu of Baham, who represented the country in this season's CAF Champions League, are named after the sacred caves of Fovu, a pilgrimage site for the Bamileke people.

The list goes on to the Kumbo Strikers in the anglophone part of the country, to Dragon Club of Yaounde and Ocean from the coastal resort town of Kribi.

Yet for quarter of a century now the best-run club in Cameroon has been Cotonsport from the city of Garoua, a team with 16 national titles who owe their name to the cotton plants from the north.

Cotton might not strike fear into opponents in the same way, but for now Cotonsport are a greater force than the once mighty Canon