There were chants of "Premier League, you're having a laugh" from the away end, as the Shrimps' fans made the most of their afternoon 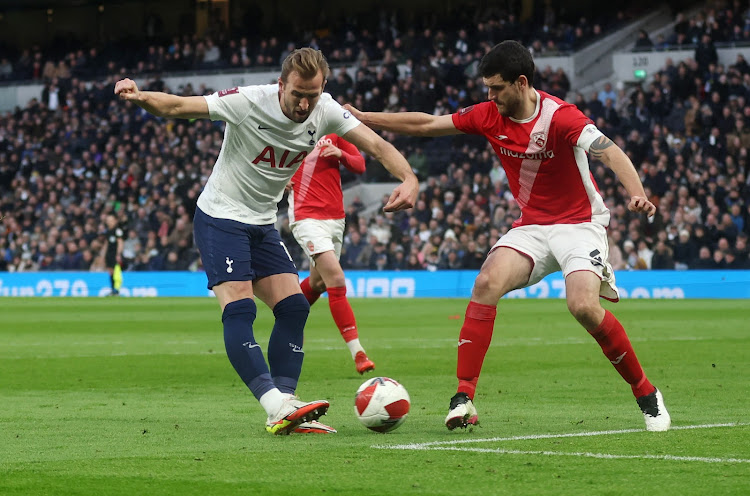 Tottenham summoned the cavalry to secure a place in the FA Cup fourth round, coming from a goal down to beat Morecambe.

Shrimps defender Antony O'Connor sidefooted a volley in from 10 yards to score the game's opening goal after 33 minutes, prompting wild celebrations among the travelling supporters.

But their hopes of a famous victory faded as goals from Harry Winks and substitutes Lucas Moura and Harry Kane gave Tottenham victory.

Spurs boss Antonio Conte make a host of changes, naming Kane and Moura on the bench and having to do without the injured Son Heung-min, but still picked a side featuring the likes of Deli Alli, Tanguy Ndombele, Winks and Giovani lo Celso.

For Morecambe, a team fighting relegation and who have won only once in their past seven matches in League One, It was almost a famous occasion to match fellow third-tier side Cambridge's heroics at Newcastle on Saturday.

There were chants of "Premier League, you're having a laugh" from the away end, as the Morecambe fans made the most of their afternoon.

The Shrimps, without manager Stephen Robinson, who missed the game after a positive Covid test, were 16 minutes away from the fourth round before Winks' free kick cross went all the way into equalise.

Goals from Moura and Kane saved Spurs' blushes inside the last 10 minutes, but the visiting fans could be heard singing loudly until the end.

Elsewhere, under-strength Liverpool had to come from behind at Anfield against League One Shrewsbury Town to reach the fourth round of the FA Cup.

The seven-time winners were shocked by Daniel Udoh's opener for the visitors.

But teenager Kaide Gordon quickly levelled, before Fabinho fired the Reds ahead for the first time with a penalty for handball just before the break.

The Brazil midfielder's penalty to put his side ahead was his first goal at Anfield since 24 June 2020, the day Liverpool lifted their first league title in 30 years in an empty stadium.

And his second iced the cake for Liverpool as, with a side containing five youngsters, they were much more efficient in beating Shrewsbury than they were two seasons ago, when they were taken to an Anfield replay.

Their only jolt came when Nathanael Ogbeta delivered a superb low left-wing cross and Udoh drifted in unmarked at the near post to poke home right-footed from close range for his 10th goal of the season.

However Shrewsbury's lead - and their dream of causing the shock of the third round - lasted just seven minutes and Gordon's cool finish was the signal for Liverpool to take charge.