“We Cameroonians love to leave everything to the last gasp,” laughs Simon Atangana, a former national player who is part of an organisation setting up the fan zones.

• Beset by months of problems and uncertainty, the month-long Africa Cup of Nations (Afcon) gets under way on Sunday when host nation Cameroon play Burkina Faso.

• The Confederation of African Football (Caf) has set down tough rules in a bid to prevent Afcon becoming a super-spreader event. 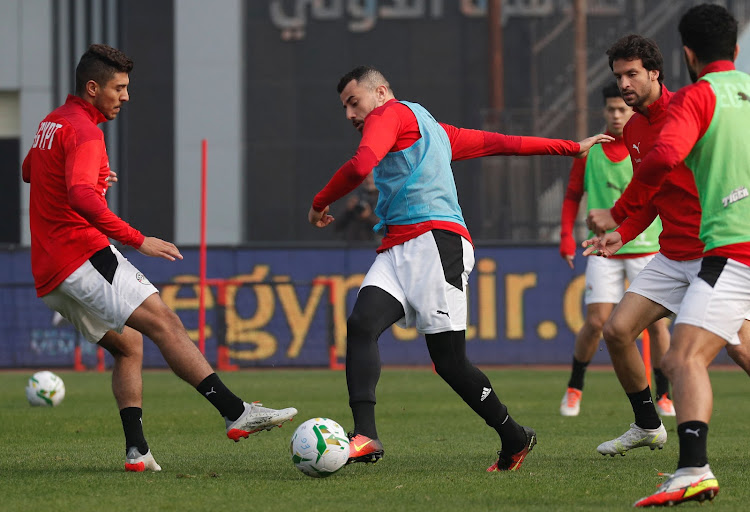 Egypt's players take part in a training session ahead of the African Cup of Nations at Cairo Stadium in Cairo
Image: REUTERS

Workers are applying final touches to the fan zones in Yaounde ahead of the long-awaited launch of Africa’s biggest sporting event this weekend.

Beset by months of problems and uncertainty, the month-long Africa Cup of Nations (Afcon) gets under way on Sunday when host nation Cameroon play Burkina Faso.

Preparations to get the giant screens, shops, restaurants and fan space ready for thousands of supporters in the nation’s capital are definitely in last-minute mode.

“We Cameroonians love to leave everything to the last gasp,” laughs Simon Atangana, a former national player who is part of an organisation setting up the fan zones.

“Everything will, of course, be ready. Afcon is going to be a huge party, and the pictures will be spread around the world.”

But a familiar foe — coronavirus — is a potential fly in the ointment. 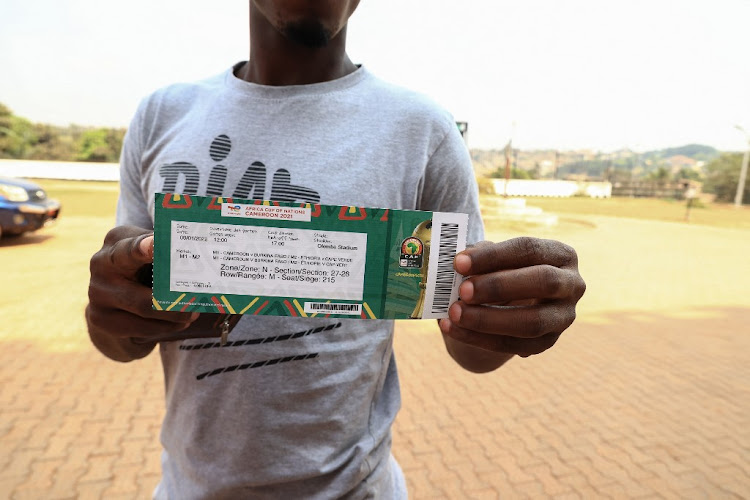 A general view of a ticket for a match of the Africa Cup of Nations (CAN) in Yaounde on January 6
Image: AFP

The global pandemic forced the postponement of Afcon from last year, and fears of another delay were eased only last month.

The Confederation of African Football (Caf) has set down tough rules in a bid to prevent Afcon becoming a super-spreader event.

Those wanting to enter the stadium must be completely vaccinated — in a country where just six percent of the adult population has been jabbed — and show a negative PCR test for the virus that is less than 72 hours old.

Venues have been limited to 60 percent of capacity, although this is being raised to 80 percent when Cameroon’s “Indomitable Lions” take the field. The rampant spread of the Omicron variant is casting a pall over team lineups.

Gabon’s Arsenal star Pierre-Emerick Aubameyang is the latest player to test positive and may miss his country’s Group C open match against Comoros on January 10.

“We asked Caf whether we can replace some of our players who got infected with Covid-19 but the answer is no,” said The Gambia’s coach, Tom Saintfiet.

“If this still remains to be the case, it could be a catastrophe... but according to the current rules, we are not allowed to replace anybody in the final list of 28-men squad.”

In Yaounde’s Warda Square, hawkers of flags, shirts and vuvuzela horns say they have had a slow start in trade.

“Business hasn’t taken off yet as much as I would like, but I’m optimistic,” said Arnaud Medja, 29, dressed from head to toe in Cameroon’s national colours of green, yellow and red.

“It’s just taking more time than scheduled. It’s just the Covid rules which have come along and put a dampener on things.”

The cup and the tournament’s lion mascot Mola have been going around the streets of Yaounde, backed by dancers and musicians and escorted by motorbike riders bedecked with the flags of all the competing nations.

“Afcon is going to be fun — a party,” said Laurentine, a 33-year-old cosmetics saleswoman.

“It’s going to be great to see the town move and watch everyone get out again.”

On Wednesday, dozens of people lined up outside ticket outlets after Afcon said seats were being put on sale, although they waited in vain.

“I spent all day yesterday queuing. I went to the city hall, to the Ahidjo stadium, and now it’s the Palais des Sports,” said Karine Sunshine, 23.  “But there’s still nothing on sale. I am desperate to see the opening match.

“We’ve been waiting 50 years for this moment — that was the last time Afcon was staged in Cameroon. So I got my vaccinations, and now I am waiting a bit longer, because the Cameroonians are going to win the cup. Just look at the atmosphere there’s going to be this weekend.”

But not everyone seemed to be aware of the tournament’s anti-Covid restrictions — or even to be particularly worried about the virus. In Yaounde’s central market, hundreds of people, none of them masked, thronged the stalls as Cameroonian and international music blasted from loudspeakers.

“Yes, of course, I will be going to the stadium,” said Abdoulay, a water seller. “You have to get vaccinated (to get in)? Oh, in that case, I won’t go. There’s no corona in Cameroon, and we don’t want the vaccine here. You don’t know what it contains and vaccinated people catch the disease anyway,” he said.