EYES ON THE BOYZ

Oputi tips Homeboyz to thump Mathare as KPL enters round 8

With the competition entering its 7th round, the western Kenya-based club is joint leaders with Kariobangi Sharks on nine points, albeit, with a game still in hand.

•Elsewhere, champions Tusker will look to put the Caf Confederations Cup heartbreak behind them when they flex muscles with Ulinzi Stars at ASK Grounds in Nakuru.

•Wazito, on the other hand, travel to Wundanyi where they have a sumptuous encounter with Sofapaka. 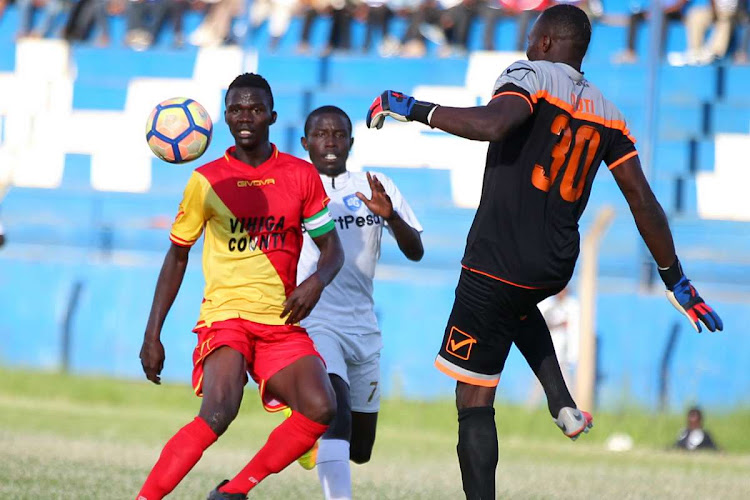 Kenyan Premier League side, Kakamega Homeboyz, are keen to relive the windfall of the 2018/2019 season, where they basked in unprecedented glory after wrapping up in second place behind record champions Gor Mahia.

With competition entering its 8th round, the western Kenya-based club are joint leaders with Kariobangi Sharks on 16 points, albeit, with a game still in hand.

This follows a superb run in the league thus far, where they remain unbeaten after winning five out of their six matches, with the other ending in a draw.

Right at the heart of Homeboyz watertight defence is 20-year-old custodian Geoffrey Oputi, who has pulled off some sublime and daredevil saves this season to keep the net out of the opponent's reach

From their six matches thus far, Oputi has only conceded thrice, quite a commendable performance by a youngster who initially nursed a burning desire to develop a career in handball and who only ended up on the football pitch after being constantly hounded by his teachers.

Oputi hopes to extend his good run as the Bernard Mwalala-tutored side come up against bottom-placed Mathare United at Bukhungu Stadium this afternoon.

A win might propel Homeboyz to the summit depending on how Sharks fare against Kenya Police at Moi Stadium, Kasarani.

“We are looking forward to a good outing on Wednesday given a positive result will propel us further towards our goal,” said Oputi.

It won't be a walk in the park for Homeboyz though, given the Slum Boys will be battling tooth and nail to register their first win of the season after a false start that leaves them at the very rump of the log.

“We are determined to lay claim to this season's silverware and we have been training very hard to achieve that objective. We never rested even during the two-week break. That's just how serious and determined we are,” said Oputi.

Elsewhere, champions Tusker will look to put the Caf Confederations Cup heartbreak behind them when they flex muscles with Ulinzi Stars at ASK Grounds in Nakuru.

The soldiers are heading into the match on the back of a 1-0 loss to Wazito at Utalii over the weekend.

Wazito, on the other hand, travel to Wundanyi where they confront Sofapaka. Both sides are high on confidence after registering wins in their last fixtures.

Nairobi City Stars host Nzoia Sugar at Ruaraka in another match scheduled for the day. City Stars have vowed to bounce back to their 2-1 loss to Kariobangi Sharks in their last encounter over the weekend.