Kenya one step away from amputee World Cup qualification

After their 4-0 loss to Ghana in the quarters on Wednesday, the team secured a 5-4 win against Egypt on Thursday to secure a matchup against Morocco or Cameroon. 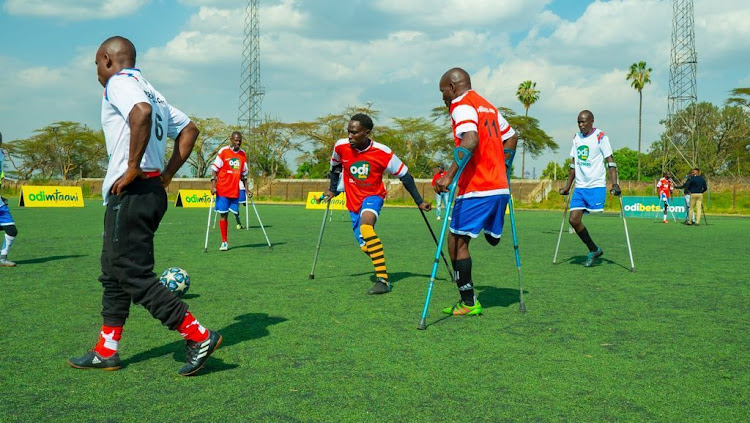 Amputee footballers in a past competition.
Image: ODIBETS

National team captain Dalmas Otieno is optimistic Kenya can qualify for next year’s Amputee Football World Cup in Turkey despite a disappointing run of results at the ongoing Cup of African Nations for Amputee Football in Dar-es-salaam, Tanzania.

After their 4-0 loss to Ghana in the quarters on Wednesday, the team secured a 5-4 win against Egypt on Thursday in an entertaining match in which they trailed twice before establishing dominance.

A hat-trick by Mohammed Munga and a Nicholas Keiyo brace was enough to secure victory and earn them a fifth-place playoff tie against Morocco.

“Since Angola are the world champions, there is a chance for us to qualify for the World Cup. They (Angola) will qualify automatically and that increases the number of places available for Africa,” Otieno said.

Kenya will battle Morocco in the fifth-place playoff after the North Africans beat Cameroon on Thursday evening. Kenya were pooled in Group ‘B’ alongside giants Angola, Zanzibar and Rwanda although the latter were a no-show. They walloped their East African neighbours 5-0 in their first game before suffering a 3-0 loss at the hands of Angola.

Otieno lamented over numerous refereeing decisions, which have gone against them, particularly in their last eight matches against the West Africans.

“Today they were just giving us yellow cards for first-time fouls...not even a word of caution from the referee. We even got a red card for a foul that was in the middle of the pitch and wasn’t even a dangerous one,” the skipper said.

He also conceded they need to improve on the goalkeeping and attacking departments if they are to ruthlessly sweep their opponents aside.

“Our goalkeeping department needs to improve. We also need to work on our attacking and be brave especially when we are playing against tougher teams,” he said.

The captain added: “Overall, the performance has been good. With Ghana, we were one step away from heading straight to the World Cup.”

Kenya has twice participated at the global stage, in 2014 and 2018 in Mexico.

In their maiden appearance, they were knocked out at the group stage after losses to Haiti, Russia, and Germany.

Four years later, they reached the last 16 of the tournament where they lost to the Russians.