Jules, Ochieng to skip AS Otoho d'Oyo return clash due to Covid-19

Omollo confirmed the incident captured on video, depicting a man conducting some rituals on the pitch before kick-off, actually took place, but added it did little to deter their resolve.

•Omollo also said Jules and Ochieng have been forced to self-quarantine in Congo for the next eight days, and will not be available for Sunday's encounter.

•Gor are, however, reading mischief given the two players tested negative to the virus en route to Brazzaville last Friday. 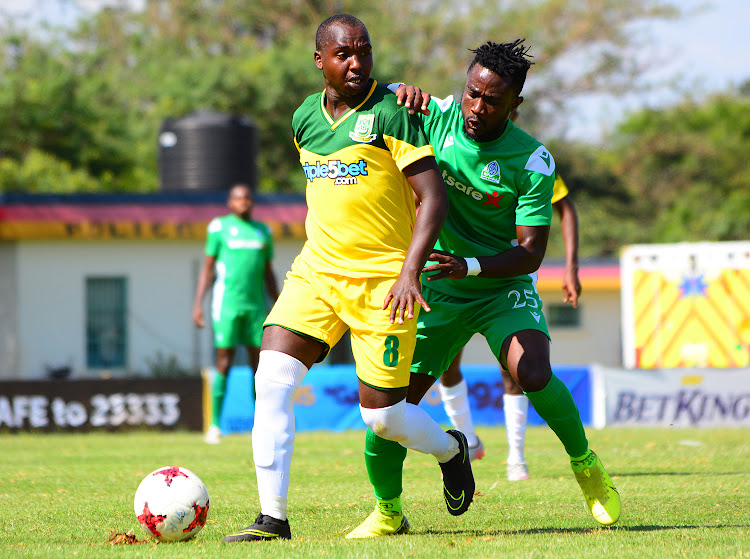 Mathare's Alphonce Ndonye vies for the ball with Jules Ulimwengu of Gor Mahia during their Premier League match at the Kasarani Annex
Image: ERICK BARASA

Kenya's representatives in the Caf Confederations Cup, Gor Mahia, are confident of turning the tide against AS Otoho d'Oyo of Congo in their return encounter at Nyayo Stadium on December 5, assistant coach Sammy 'Pamzo' Omollo has said.

The winner of the playoffs will secure a slot in the group stages of the continental showpiece, and Omollo says Gor are not ready to let such a glorious opportunity slip through their fingers despite the torrid start.

“We played well in Brazaville, only that the outcome didn't favour us. But I believe we will be able to turn the tables on Sunday at home,” said Omollo in an exclusive interview with the Star on Tuesday.

Omollo said they could have torn their opponents into smithereens at the Alphonse Massamba-Debat Stadium in Brazzaville if they had raised a full house on the match day.

Unfortunately, two of their dependable stars were barred from the proceedings after Covid-19 tests conducted upon their arrival returned positive results.

Roland Okouri 63rd-minute strike was all it took to separate the two sides as K'Ogalo returned home with an empty basket devoid of goals and points.

“To some extent, our campaign was slowed down by the limited number of players we had on that day. We only had 11 players for the match after the rest of the squad tested positive for C0vid-19, including our main striker Jules Ulimwengu and midfielder John Ochieng,” said Omollo.

Omollo also said the duo have been forced to self-quarantine in Congo for the next eight days, and will not be available for Sunday's encounter.

“Our two players (Jules and John), who 'tested' positive for Covid-19 in Congo will be in quarantine for eight days before being allowed to travel back to Nairobi,” Gor Mahia sporting director, Omondi Aduda, said as quoted by the club’s social media pages.

Gor are, however, reading mischief given the two players tested negative to the virus en route to Brazzaville last Friday.

Omollo confirmed the incident captured on video, depicting a man conducting some rituals on the pitch before kick-off, actually took place, but added it did little to deter their resolve.

“We can't say it was witchcraft, but we saw a man carrying out some questionable activities on the pitch. However, that didn't affect the players in any way. They did it so brazenly and openly. Perhaps, it was a way of seeking to instill fear or even intimidate the boys but I guess it didn't affect us much.”

Omollo is calling for patience in the wake of a three-match goal drought that has beset their striking force.

“We are working on scoring. I know there are concerns that our strikers have been struggling to find the net but then, the fact that we are still unbeaten in the league lends credence to our impressive performance thus far.”

He said they were in negotiations with the authorities to allow more fans into the stands on Sunday.

“We are hoping the fans will be present in large numbers to cheer and motivate the boys.”