The former Manchester City player joined United in a £73m summer move from Borussia Dortmund but has had to wait more than three months for his first goal.

• He made minimal impact under Ole Gunnar Solskjaer and, before the Norwegian's dismissal, had scored no goals and provided no assists this season. 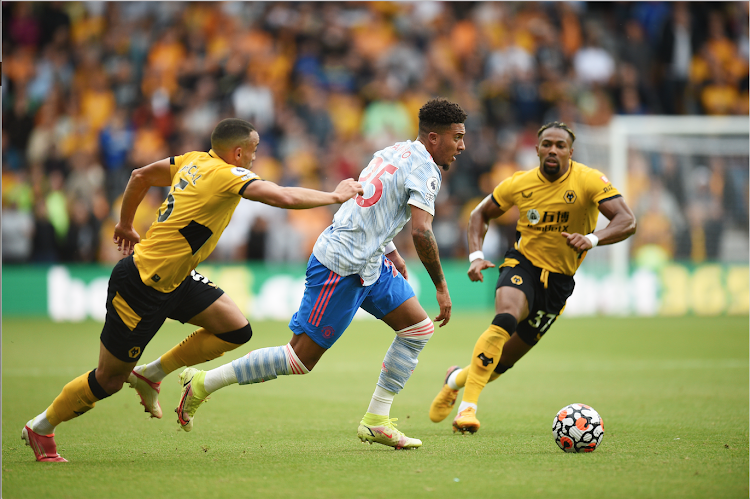 It has been a tough start for Jadon Sancho at Manchester United but the England winger finally had something to smile about on Tuesday.

The former Manchester City player joined United in a  £73m summer move from Borussia Dortmund but has had to wait more than three months for his first goal.

He made minimal impact under Ole Gunnar Solskjaer and, before the Norwegian's dismissal, had scored no goals and provided no assists this season. He had managed only one shot on target in the Premier League.

That form led to him being dropped from the England squad for the recent World Cup qualifiers against Albania and San Marino, having been told by Three Lions manager Gareth Southgate he had been fortunate to make the cut for matches in September.

But his difficult run in front of goal ended when he finished off a flowing move involving Fred, Marcus Rashford and Bruno Fernandes to score United's second in a 2-0 win against Villareal—a result that secured a Champions League last-16 spot.

However, it was not just the goal that caught the eye.

He had another shot well saved by goalkeeper Geronimo Rulli after linking up with Fernandes, made four tackles (more than any of his team-mates) and had a pass succession rate of 92.5%, including 24 in the Villarreal half.

"Proud to score my first goal for Manchester United in the best competition in world football," said the 21-year-old on Twitter.

Interim United boss Michael Carrick, taking charge for the first time after Ole Solskjaer was sacked on Sunday, handed Sancho only his eighth start for United.

"Jadon was brilliant. You get your rewards so I was delighted for him," said Carrick.

"It was a big night for him, he put a real effort in defensively and the goal will give him a massive boost.

"I know how much he likes the ball at his feet but the most pleasing thing was the effort and application off the ball.

"He played a big part in the team's performance - he epitomised how we had to dig in."

'Such a clever footballer'

"He looked fitter and was United's best player-he's such a clever footballer," said Scholes.

"They need to use him more. Playing in this team is a little bit different because he doesn't have a flying full-back like at Dortmund."

Ex-Everton midfielder Leon Osman, speaking on BBC Radio 5 Live, added: "If anybody deserved a goal it was Sancho - he was outstanding.

"It's tough when you're at a new team and there's a lot expected, but he created a number of opportunities."

Sancho has played for England 12 times and in the summer helped his country reach the Euro 2020 final, although he was one of three players to miss a penalty in the shootout loss to Italy.

At club level he won the German Cup during a successful four-year spell at Dortmund, scoring 50 goals in 137 appearances and earning a reputation as one of Europe's brightest young attacking prospects.

"It's up to Jadon what happens next and how he kicks on - he has all the talent in the world," added Carrick.