What can fans expect at the Qatar World Cup

It will be the first time the finals have been held in a Muslim country in the Gulf, and there will also be a change of schedule.

• There has been plenty of criticism over the decision to stage the tournament in Qatar because of concerns over the country’s human rights record.

• Al-Nuaimi added: “The Fifa World Cup Qatar 2022 will bring with it the biggest influx of sports fans the region has ever seen — introducing them to Arab culture and traditions. The 2022 FIFA World Cup Global and Local Ambassadors pose for a group picture ahead of the Amir Cup final match between Al-Sadd and Al-Rayyan at the Al-Thumama Stadium in the capital Doha on October 22, 2021.
Image: AFP

On Sunday, the one-year countdown to the Fifa World Cup Qatar 2022 started. What can fans expect at the tournament?

It will be the first time the finals have been held in a Muslim country in the Gulf, and there will also be a change of schedule.

Usually, the event takes place in the summer but because of extreme heat at that time of year, it has been moved to a November-December ‘winter’ slot, though temperatures will still reach about 25C.

There has been plenty of criticism over the decision to stage the tournament in Qatar because of concerns over the country’s human rights record.

In the past week, Amnesty International has released a report accusing the country of failing to implement its own laws designed to improve conditions for migrant workers. The Qatar government has said it “rejects” Amnesty’s assertion.

Equality campaign group Kick It Out, meanwhile, has announced the formation of a working group to look at inclusivity issues in Qatar, where homosexuality is illegal.

Fatma Al-Nuaimi, communications executive director of Qatar’s supreme committee for organising the tournament, told BBC Sport: “It’s a tournament for everyone, a tournament of firsts, and a tournament where everyone will be welcome.”

There will be eight stadiums across five cities at the 2022 World Cup, all close to each other, with no need for internal flights. And in terms of ensuring fans have somewhere to stay, organisers believe they have been creative in the range of accommodation they are offering.

Al-Nuaimi added: “The Fifa World Cup Qatar 2022 will bring with it the biggest influx of sports fans the region has ever seen — introducing them to Arab culture and traditions.

“It’s an unprecedented opportunity to project a true image of the Arab world as a welcoming, peaceful and hospitable region.

“With one year to go, we have achieved a degree of readiness that no Fifa World Cup host country has reached this far out from the tournament kick-off date.”

With the help of Qatar’s organising supreme committee, BBC Sport answers some key questions facing those looking to attend. Construction workers at the stands of Qatar's new al-Bayt Stadium in the capital Doha on December 17, 2019
Image: AFP

When is the draw?

Gareth Southgate’s England have booked their place, while Wales and Scotland are in the play-offs to determine whether they will play in the tournament. Northern Ireland have failed to qualify.

If they seal progression, the three Home Nations teams and all remaining qualifiers will find out the group stage draw on April 1, 2022 in Doha.

When do tickets go on sale?

Tickets will go on sale early next year with prices and information on categories to be announced by Fifa. It remains to be seen whether the cost of tickets for locals will be cheaper than for foreigners.

How many fans are expected and where can I stay?

Organisers estimate that about 1.5 million fans will attend the tournament, which takes place over 28 days. There are, however, only around 175,000 rooms for visitors travelling to the country.

The total is made up of traditional two to five-star hotels and serviced apartments and villas that will be managed by 10,000 staff. So here is the innovative bit.

In 2019, Qatar signed a deal with a cruise company to lease two luxury liners — known as floating hotels — which will be docked in Doha Port during the tournament, providing 4,000 cabins for visitors.

And if fans want to make the most of the hot weather, they can stay in one of the two tented villages that are expected to be built in the desert, while the concept of fan villages is still being finalised.

Fans can also stay in the neighbouring United Arab Emirates and catch the 70-minute flight from Dubai to Doha for games.

Will I be able to get a drink?

The consumption of alcohol is prohibited in Islam and is not part of local culture in Qatar.

However, people who wish to enjoy a drink can find bars at the higher-end hotels and private clubs. Alcohol will also be available in designated Fifa fan zones and select areas in stadiums. During the 2019 Fifa Club World Cup in Qatar, which Liverpool won, alcohol was sold in official tournament fan zones, with a beer costing £5.

Drinking is not be permitted in general public spaces, such as the street, and visitors are being asked to respect the country’s traditions.

The UK government’s guidance states that it is an offence to be drunk in public in Qatar. Drinking in a public place, the guidance states, could result in a fine or a prison sentence of up to six months. 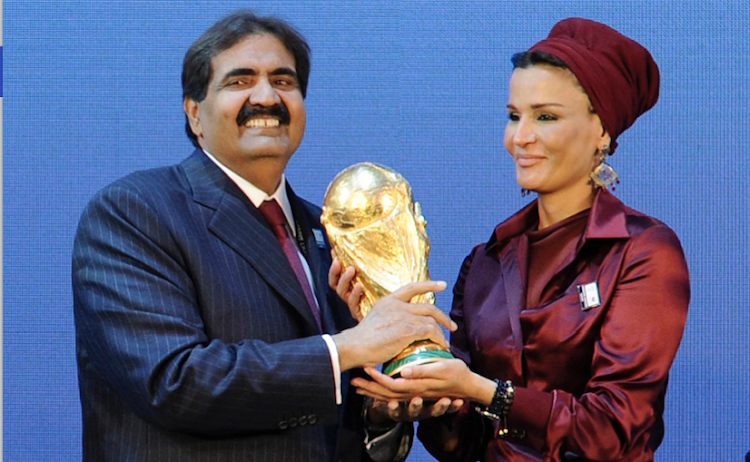 Emir of the State of Qatar Sheikh Hamad bin Khalifa Al-Thani (R) and his wife Sheikha Moza bint Nasser Al-Missned with the World Cup trophy after the official announcement that Qatar will host the 2022 World Cup at the FIFA headquarters in Zurich on December 2, 2010.
Image: AFP

Is there a dress code?

Qatar is described as a conservative and diverse country.

People from 90 different countries work and live in Qatar with locals dressed in traditional thobes and abayas, while organisers say you are just as likely to see someone in a sari as you are in a football shirt or hijab.

Tourists have been told they are free to embrace their clothing of comfort, as long as it is modest and respectful to the culture.

They are expected to wear conservative attire in some places such as government buildings, national museums and Doha’s renowned Souq Waqif marketplace. If someone is wearing shorts or beach attire at such places, it is likely they will be asked to cover up.

At the 2019 Rugby World Cup in Japan, tattooed players were asked to cover up to avoid offending people, but no such request will be made in Qatar.

How will the LGBTQ+ community be welcomed?

Homosexuality is illegal in Qatar and the country has strict anti-LGBTQ+ laws.

Al-Nuaimi, though, has promised that “everyone will be welcome”. Generally, public displays of affection are not part of Qatari culture. Locals expect visitors from all backgrounds to respect the culture and customs. Last year, it was announced that rainbow flags will be allowed in stadiums to comply with Fifa rules promoting tolerance and inclusion at matches.

Organisers have said they are taking every reasonable effort to ensure everyone’s safety and wellbeing during their visit.

What about the deaths of migrant workers?

On Tuesday, Amnesty International said England players, staff and fans should use their positions to highlight human rights concerns.

The organisation released a 48-page report claiming migrant workers are being exploited as they help to build stadiums and infrastructure — an assertion that Qatar’s government has rejected.

Max Tunon, head of the International Labour Organisation in Qatar, told BBC Radio 5 Live: “We have been in Doha for three-and-a-half years, working with the government on a series of reforms looking at a range of issues.

“We have seen real progress and change during this period but at the same time we recognise there is still a lot of work to be done.” 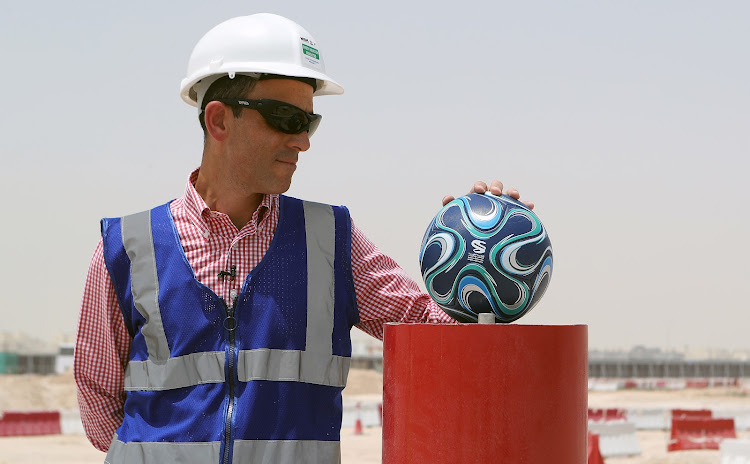 Tamim Loutfi Elabed, project manager of the construction of Lusail stadium, the 80,000-seater venue which will host the opening and final of the Qatar 2022 World Cup
Image: AFP

Are the stadiums ready?

Six of the eight stadiums have been completed and are tournament ready, while work on the remaining two will be completed by the end of the year.

This includes the 80,000-capacity Lusail Stadium, which is the biggest venue at the tournament and will host the final. Local kick-off times for group games will be 1pm, 4pm, 7pm and 10pm (which will be 10am, 1pm, 4pm and 7pm in the United Kingdom).

Al-Nuaimi said: “Fans can look forward to a unique experience. A tournament that will show the best of Arab and Qatari hospitality and open the doors to an entire region.

“A compact World Cup, bringing them all together in one place, with the possibility of watching two games in a day.”

Sustainability is a big priority at the moment with countries globally aiming to reduce carbon emissions. The only flights fans will have to take are when they arrive and leave from Hamad International Airport.

Al-Nuaimi said Qatar “sets a new standard for sustainability in the region”.

Unlike the previous 2018 World Cup in Russia, this tournament takes place on a much smaller scale so there is no requirement to take any internal flights.

Fans can expect minimal travel times between stadiums via the new metro system, which provides direct access to five of the eight venues, while the remaining three will be serviced by sustainably powered shuttle buses from the nearest station.

Meanwhile, all Qataris, residents and visiting fans attending Arab Cup matches over the next few weeks will need to obtain a Hay’ya Card.

Spectators will need this form of fan ID as well as the match ticket to enter the stadium but it will allow free access to bus, metro and tram travel — to and from the stadium — on matchdays.