World Cup rates for all but two- and three-star hotels look set to exceed the most recently published average nightly room rate of 438 riyals.

• Organisers have announced only partial details about how and where they plan to find 130,000 rooms, saying the total stock of hotel rooms would be announced “in due course.

• Qatar, which has been in the spotlight for its treatment of migrant workers on construction sites, hopes the tournament will attract 1.2 million visitors, roughly a third of its population. 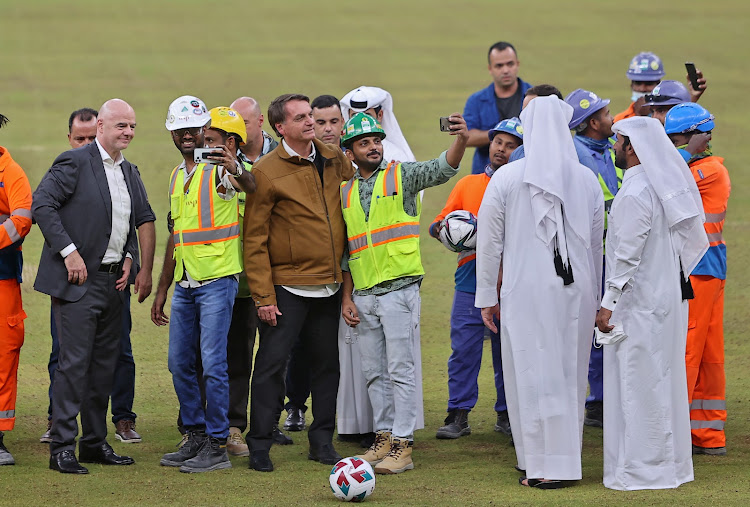 On the outskirts of Doha, low-rise apartment blocks are starting to take shape that will house many of the football fans due to descend on the Qatari capital next year for the World Cup 2022.

Qatar, which has been in the spotlight for its treatment of migrant workers on construction sites, hopes the tournament will attract 1.2 million visitors, roughly a third of its population.

But organisers told Reuters they expect to be able to offer up to 130,000 rooms, including hotels, which could leave thousands of fans scrambling for accommodation when matches start next November.

And those hoping for city views may be disappointed. The Madinatna complex, capable of housing up to 27,000 fans sharing apartments, is surrounded by an 18-lane expressway and a stark expanse of desert 25 kms (15 miles) from Doha’s centre.

Organisers have announced only partial details about how and where they plan to find 130,000 rooms, saying the total stock of hotel rooms would be announced “in due course.

“It’s really frustrating when the host country makes promises about available and affordable accommodation, and then we get closer to a tournament and we see a shortage,” said Ronan Evain, executive director of Football Supporters Europe, a network of European soccer fans.

Qatar will have fewer than 50,000 hotel rooms ready by next November, according to estimates by Qatar Tourism, a government body that sets strategy and regulates tourism. And not all hotel rooms will be available to fans as many have been reserved for players and FIFA officials, hotel sources said.

Two cruise ships, one still under construction in France, and shared villas and apartments, including those at Madinatna, would provide at least another 64,000 rooms, most of them to be managed by Accor, Europe’s largest hotel operator. A construction frenzy continues at the site of Madinatna (Our City), due to be completed in spring, and at more than two dozen hotel sites.

Authorities have banned all hotels from accepting individual reservations starting November until the tournament’s conclusion on Dec. 23, according to a circular issued earlier this year.

Instead, Qatar’s Supreme Committee for Delivery and Legacy will handle sales of nearly all accommodation options in Qatar. The government has capped hotel rates specifically for the World Cup, but rates for other accommodation have not yet been set.

World Cup rates for all but two- and three-star hotels look set to exceed the most recently published average nightly room rate of 438 riyals.

The scramble to secure accommodation has seen some furnished apartments and villas rented only to tenants agreeing to short-term leases. A rental agent at the Grand Hyatt’s furnished villas, for example, said all new leases must end in March 2022.

It has driven up rental prices, which had been declining for years. Asking prices for apartments and villas have recently increased by 5-10 per cent, said a recent real estate market review by Cushman and Wakefield.

Qatar, the first Middle Eastern nation to host the event, is already under media scrutiny over the plight of migrant workers, who along with other foreigners comprise the bulk of the population.

It introduced a series of labour reforms nL2N2NE0MQ in the last year that have boosted the minimum wage and rules authorities say are designed to protect workers from heat stress.

Previous World Cups have been held across multiple cities in large countries like Brazil or Russia, but Qatar is roughly the size of Jamaica and its eight World Cup stadiums are clustered around its only major city, Doha.

A spokesperson for the Supreme Committee said in a statement to Reuters that they will be “utilising every available accommodation option” in the country. One proposal has been desert “fan villages” that house visitors in bedouin-style tents or out under the stars in the Gulf’s mild autumn.

The Supreme Committee spokesperson said that concept was still being finalised. It was not immediately clear how sewage, water and food at desert villages would be handled.

Qatar Tourism has launched a “holiday home” scheme allowing people in Doha to apply for licences to rent out their homes on platforms like AirBnB or VRBO. Organisers marketed a “Host a Fan” campaign ahead of the FIFA Arab Cup in Doha this December, which will serve as a test of Qatar’s preparedness for next year.

But the call for Qataris to open their homes has raised eyebrows among some in the conservative Muslim country and organisers have not said how many homes have signed up.

If these schemes do not pan out, fans may choose to commute from other Gulf Arab states, especially after a row between some of them and Qatar was resolved in January, allowing flights to resume between Doha and the United Arab Emirates (UAE).

Work is also underway to expand Qatar’s main airport and reopen an old airport, allowing more flights from nearby cities like Dubai and Abu Dhabi in the UAE or the Omani capital Muscat. World Cup officials played down the prospect of an accommodation shortfall and said Qatar was building only what its market needed and avoiding “white elephants”.

“We don’t want to start building a lot of hotels, then after the tournament when the peak drops, there is not going to be any (utilization of the hotels),” said Fatma Al-Nuaimi, a spokesperson for the 2022 organising committee.

Aside from soccer stadiums, Qatar has not specified legacy plans for what will happen to World Cup infrastructure after the tournament. Complexes like Madinatna, which alone brings 6,780 new apartments to market, could risk a supply glut in a property market that has previously been hit by the Gulf row that saw Saudi Arabia and its allies impose an embargo in mid-2017.

“After the World Cup, we expect rents to reduce again and supply that had been tied up for the event will be filtered back into the market,” Cushman and Wakefield head of research Johnny Archer told Reuters.