Kibera ready to roar back to KPL after boost

We maintained the bulk of last season's team and the squad is balanced, says Odipo

• I believe this partnership comes in handy and goes along way in motivating the technical bench and players-Omwanda.

• We are also looking at how to support the Kibera community in terms of health, employment and education while considering other sports as well-Bergeron 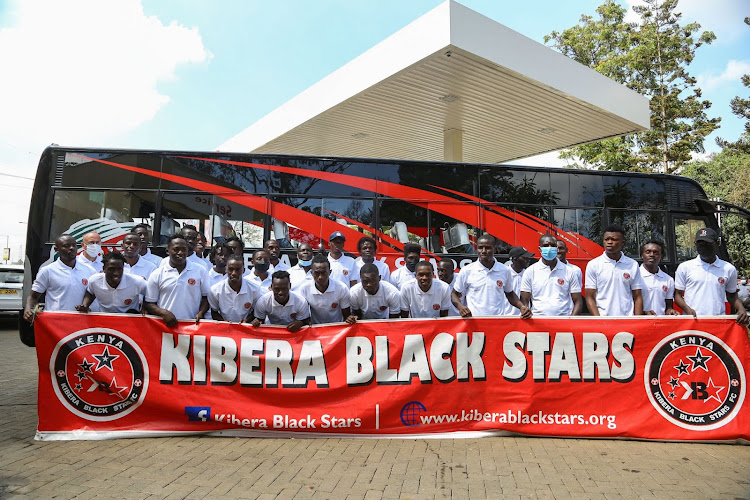 Odipo is banking on a competitive squad which is a blend of youth and experience, saying the team boasts of depth and quality and the new signings are ready to help the team achieve their target.

"We maintained the bulk of last season's team players and the squad is balanced. Black Stars lacked depth last season hence hope of promotion were dented but we have addressed that and the boys really look sharp."

"NSL is tough and needs thorough planning. We want to win all our home matches and get good results on our travels. Logistically, we are sorted and there should be no problem negotiating our way back to top tier."

Club's skipper Donald Omwanda echoed similar sentiments, saying they have well prepared and are raring to go for the new season

"Morale is high. We have played many friendly matches and the team has jelled well so promotion is the bare minimum," he said.

The two were speaking at RUBIS Dagoreti Station during the launch of Rubis Energy Kenya and Kibera Blackstar Association Partnership and handover of a 37-seater bus to be used by the club in matches across the country.

"I believe this partnership comes in handy and goes along way in motivating the technical bench and players. Last season we struggled a bit with transportation and sometimes we were uncomfortable with the vehicle used. This new bus will make us comfortable and the players will put their best foot forward. We won't let down the Kibera community," Omwanda remarked.

RUBIS Energy Kenya Group managing director, Jean Christian Bergeron, challenged the team to fight for the badge. He said they are looking into  sponsoring other sports next year.

"Winning is the cherry on the cake but sports is a bout commitment.It's a long term commitment and we will walk with Kibera for at least five years. We are also looking at how to support the Kibera community in terms of health, employment and education while considering other sports as well."

Club chairman James Midenyo said the ball was in the players court  and believes they won't disappoint in the quest for promotion.

"The bus will cut the transportation cost and the money that was  used as fare will be diverted to pay allowances. Every season, we roughly use 700,000 as cost for transport," he noted.  The NSL season kicks off next weekend.