Ulinzi's performances have seen them mentioned in the same breath with WPL champions Thika Queens and three-time former champions Vihiga.

• When I started this noble project in 2018, the idea was to build a team that will be hard to beat while playing an attractive game-Mwanza

• Ulinzi defied odds to finish second in WPL in 2020/2021 season in zone A, an outcome that granted them a playoff slot where they were eventually knocked out  by fellow newbies Nakuru West Queens. 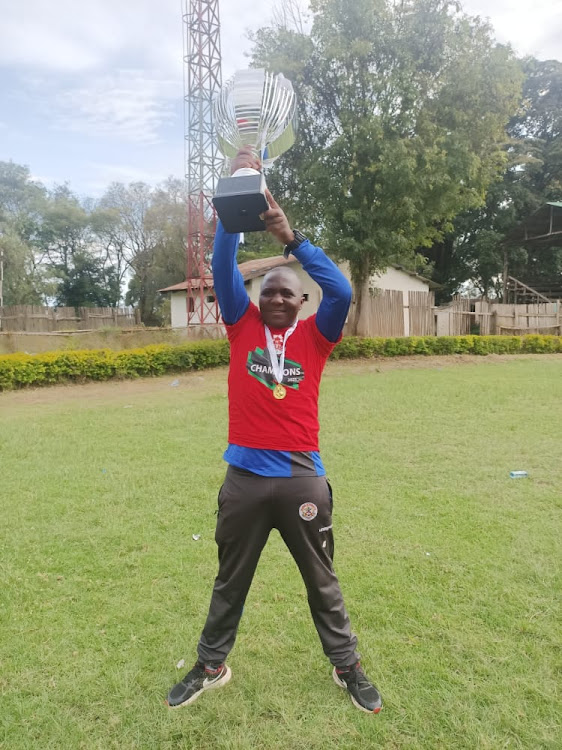 When Ulinzi Starlets maintained an unbeaten run to earn promotion to the Kenya Women's Premier League in the 2020/21 season, many predicted they wouldn't last long in the top tier.

A good number of the sides previously promoted failed to maintain their status in the top tier, and the general feeling was that Joseph Mwanza's charges would suffer the same fate at the end of the 2021 season.

Mwanza, largely unknown in football circles, was thus faced with the daunting task of proving his doubters wrong.

But after investing heavily in the transfer market, the tactician knew his squad would be ripe enough to challenge for the top flight title, at the bare minimum. They were not merely going to fight for survival on their debut. 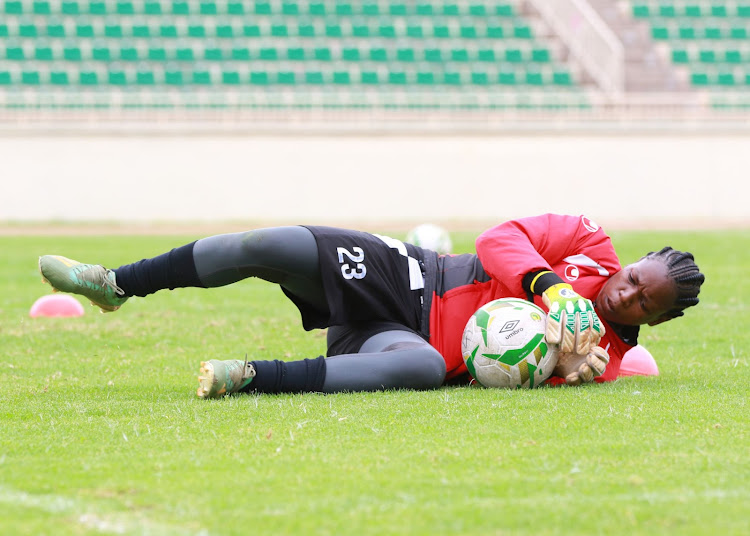 Ulinzi and Starlets goalkeeper during a training session at Nyayo Stadium on October 19.
Image: ERICK BARASA

Ulinzi registered mixed fortunes in their first five matches with a tally of 10 points from three wins, a draw and a loss. Mwanza was, however, convinced the team was on an upward trajectory if only the playing unit could buy into his high-pressing attacking football brand likened to Pep Guardiola's style.

A string of three consecutive wins enabled Ulinzi take the first leg plaudits after rising to third, contrary to the expectations of many.

"When I started this noble project in 2018, the idea was to build a team that will be hard to beat while playing an attractive game. In my philosophy, I believe in attack and that's why I have managed to build a team with top-notch strikers," Mwanza told The Star.

Ulinzi defied odds to finish second in WPL in the 2020/2021 season in Zone A, an outcome that granted them a play-off spot where their run for the title was stopped by fellow newbies and Zone 'B' third-place finishers Nakuru West Queens.

This turned out to be just a blot in their quest for silverware as Ulinzi —billed the queens of comeback — made history by becoming the first team to win the inaugural Football Kenya Federation FKF Women's Cup trophy last month after beating Vihiga Queens.

Queens were pre-match favourites heading into the final showdown at ASK Showground, Nakuru. Boniface Nyamunyamu's side had just beaten Commercial Bank of Ethiopia 2-1 to book the CAF Champions League slot reserved for the Eastern Africa region but were average against a well-drilled Ulinzi side.

Ulinzi's performances have seen them mentioned in the same breath with WPL  champions Thika Queens and three-time former champions Vihiga. Ulinzi have even been tipped to break the duo's dominance by going for the title in the new season that commences on November 13 as the league reverts back to a unified format.

Goalkeeping sensation Maureen Shimuli, strikers Neddy Atieno and Lucy Mukhwana were rewarded for their scintillating performance with Harambee Starlets call ups for the African Women's Cup of Nations qualifier match against South Sudan, where Atieno scored four goals in the first leg encounter palyed at the Nyayo Stadium on Wednesday. 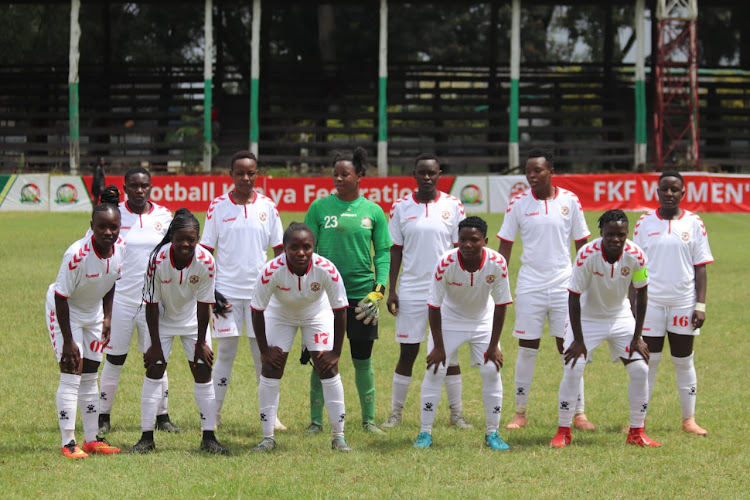 Ulinzi Starlets players pose for a photo in a past match
Image: HANDOUT

But how has Mwanza who only moved into coaching in 2016 managed to transform the Soldiers into a real force in women's football after only three years?

What is it that makes Ulinzi a threat to rivals, dominant and with a daring mentality? And why are they also billed 'comeback queens?

"It's all about planning. The management have been supportive since this project started. They have signed for me all the players I have requested for and whom I believe will help improve this team, leaving me with the task of producing results," said Mwanza, who retired from playing football in 2015.

"We have always analysed the performances of our players after every match. We not only identify their weaknesses but also push them hard in training to improve their overall performances individually and as a team," said Mwanza.

Mwanza, who is currently pursuing a CAF 'B' license badge, was only 26 when his promising career came to an abrupt end after he sustained a double fracture in his right knee.

His coaching career took off at Kahawa Queens in 2016, a year after the injury setback. In 2017, he took charge of Kahawa United men's team midway through the season when they were languishing in an unfamiliar 10th place in the County League standings.

Mwanza then went 23 matches unbeaten, guiding the team to promotion to the Regional League after fending off rivalry from more fancied teams like Tusker Youth and Sofapaka Youth. His impressive stats convinced the Kenya Defence Forces to appoint him Ulinzi Starletshead coach in 2018.

Since then, he has created a team worth watching, led by the impressive forward trio of  Mukhwana, Siliya Rasoa and Atieno. They have tormented defences at will and their flexibility to play anywhere in the front three has left defenders worried.

The trio scored 21 goals collectively last season — a number only surpassed by Vihiga Queens, whose attackers managed 28. Mwanza believes the best way to defend is to attack.

"Anybody can score. Against Vihiga, Atieno was pocketed but Mukhwana found the back of the net. Atieno has been a specialist in the Cup competition while Mukhwana and Rasoa were our top scorers in the league. Our midfielders have also had their names on the scoring chart, hence, Ulinzi is not a one-player show," said Mwanza.

Atieno is the most important player for Ulinzi based on how they play and how she affects those around her. The 29-year-old captain ranked top for chances created and dribbles completed. The 'tormentor in chief' also popped up with crucial last-minute match winning goals.

Ulinzi do not have a separate statistic for mid-bending trickery but Atieno would surely top that too. Just ask Kayole Starlets' Juliet Adipo, the victim of an outrageous nutmeg or Vivian Nasaka, the Vihiga Queens defender who was given a-run-around at Nakuru. 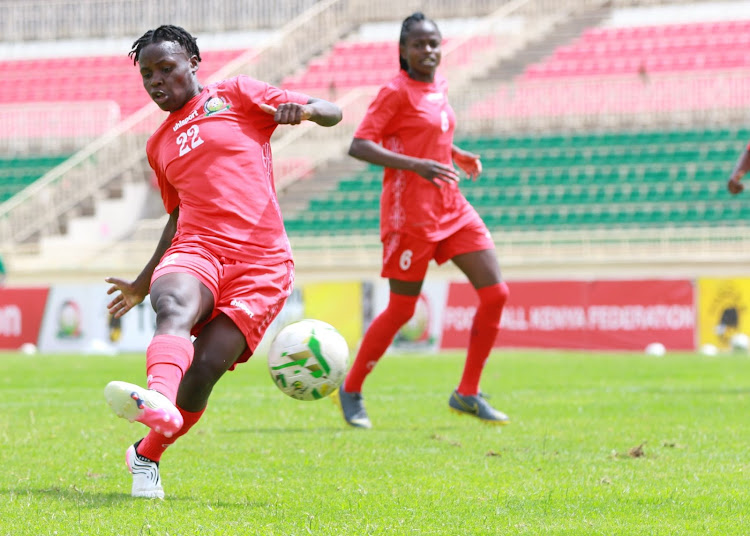 Mwanza views his defence and midfield as areas that need a lift. The team was short of options last season after three of his integral players — Jentrix Khuyudi (striker), Christine Chisung'e (defender) and Everlyne juma (midfielder) — joined Recruits Training School during the second half of the season but still managed to steady the ship.

He is bound to name his new signings next week, whom he believes will add depth and solve the team's inadequacies.

"My players are strong-willed and hard-nosed to succeed by virtue of being soldiers. We never say die irrespective of the situation and we strive to be the best," says Mwanza.

"In rough moments during matches, players have stood tall and come from behind to take all the three points. Even though losing is one of the three outcomes expected in a match, my players do not want to associate with failure."

But despite their promise ahead of the new season, it is expected that fixtures against Vihiga, Thika, Trans-Nzoia and Gaspo will test the resilience of every Ulinzi player and that of Mwanza too.

"As a coach, finishing the season without a trophy demoralises me. We have won the FKF Cup title, What next?  We are going for the WPL title, no doubt. But we want to keep the Cup too, quipped Mwanza."

"Those teams (Vihiga, Thika, Trans-Nzoia and Gaspo) are genuine title contenders but Trans-Nzoia are more unpredictable. Zetech Sparks will also surprise many. They have signed quality players and I can't rule them out," observed Mwanza.

The firebrand tactician is keen to see more of his players don the national team colours while tipping Maureen Shimuli to dethrone Annet Kundu as Starlets' first-choice goalkeeper.

"Good performances have seen my players being considered for Starlets duty. Even my indispensable goalkeeper Shimuli can end up being the number one goalie.  Any coach's dream is to see his players earn caps and I am no different," he said.

Ulinzi's second season in the Premier League comes with weighty expectations. They have set a standard that needs to be maintained. That can only be possible if they cannot suffer from second-season syndrome but the future looks bright for the gallant soldiers.