Gor dominated most of the proceedings with Leopards only managing to jut out their claws towards the end of the encounter, albeit too late.

•Boniface Omondi marked his return to Gor Mahia in style with a first half goal that proved enough to claim the scalp of arch-rivals AFC Leopards. 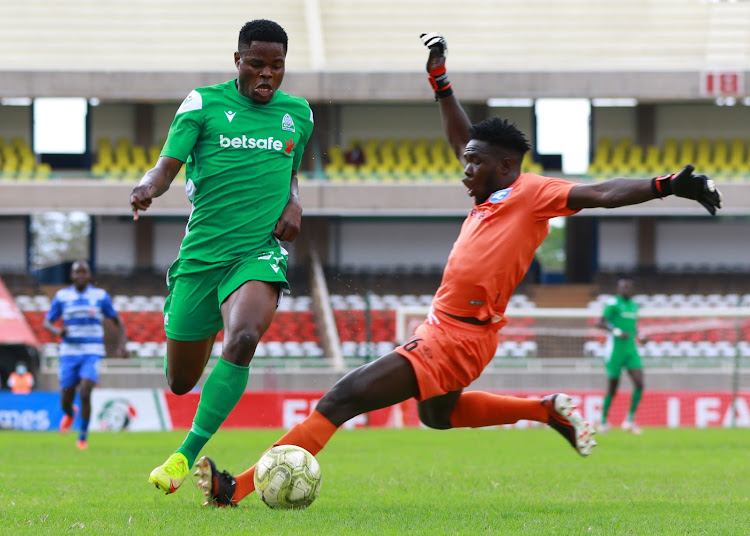 Gor Mahia head coach Mark Harrison is convinced their hard-fought 1-0 win over arch-rivals AFC Leopards is a morale booster ahead of their CAF Confederations Cup return match against Sudan's Al Ahly Merowe in Nairobi on Sunday.

Harrison was over the moon after claiming victory in his maiden Mashemeji derby at Moi Stadium, Kasarani on Wednesday.

“It was certainly a marvelous performance and the boys played according to the script. This most certainly serves as a major boost as we prepare for our return leg against Al Ahly Merowe,” said Harrison.

“There is no way we are going to be complacent. We know we are 3-1 up but we got to finish the job."

The British gaffer, who was brought on board towards the end of last season, admitted that Leopards gave them a run for their money.

“We came into this match with a lot of respect for our opponents and we had prepared well for a tough encounter. They were worthy opponents and gave us a hard time, I must admit,” he added.

Harrison, however, said his charges had an opportunity to enhance the margin but we were not clinical enough in front of goal.

As Harrison enumerated his gains, his opposite number Patrick Aussems was disappointed after suffering his second consecutive derby defeat.

Aussems called out his squad urging them to learn to have more composure in the attacking third if they expect meaningful results in their subsequent ties.

“As usual, we failed to create chances and the few that came along were not utilized," said Aussems.

Boniface Omondi marked his return to Gor Mahia in style with a first half goal that proved enough to claim the scalp of arch-rivals AFC Leopards.

Gor dominated most of the proceedings with Leopards only managing to jut out their claws towards the end of the encounter, albeit too late.

It was K'Ogalo's seventh consecutive victory in the Mashemeji derby and their second of the season.

Elsewhere, Mathare United shook off their torrid start to the season with a convincing performance over pre-match favourites Sofapaka whom they pipped 2-1 at Thika Stadium.

Newbies Kenya Police eventually found their footing in the top tier to stun Nzoia Sugar 3-1 at Kasarani Annex as fellow debutants Talanta held KCB to a one-all draw in a closely contested encounter at Utalii Grounds.