Wasike is expected to submit a comprehensive report to the Ministry of Sports on or before October 2.

•Amina's directive came exactly a day after Mwendwa lost a case in the High Court where he sought an injuction to stop the Directorate of Criminal Investigations (DCI) and Director of Public Prosecutions (DPP) from arresting him over alleged misappropriation of funds. 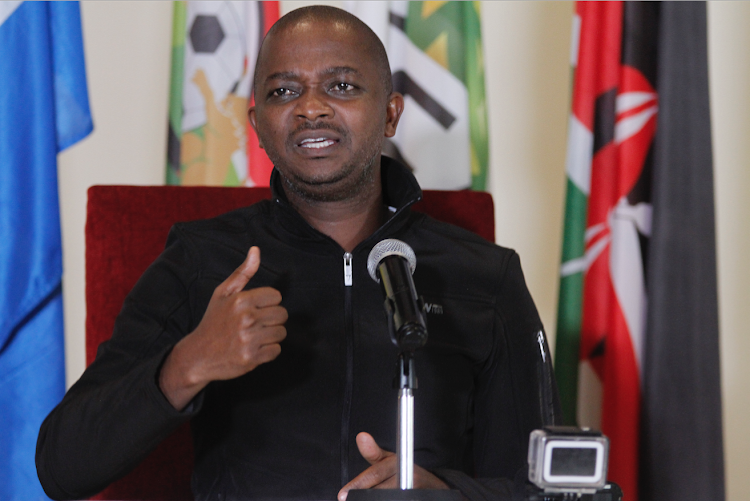 This follows a directive on Thursday by Sports Cabinet Secretary Amina Mohammed requiring Wasike to undertake inspection of the local governing body in accordance with the provisions of Sports Act 2013.

“Today, pursuant to Section 52(1) of the Sports Act (2013), I have directed the Registrar of Sports to undertake the inspection of Football Kenya Federation in accordance to the provisions of the Act," said Amina in a press release.

Wasike is expected to submit a comprehensive report to the Ministry of Sports on or before October 2.

Amina's directive came exactly a day after Mwendwa lost a case in the High Court where he had filed an injunction seeking to stop the Directorate of Criminal Investigations (DCI) and Director of Public Prosecutions (DPP) from arresting him over alleged misappropriation of funds.

However, Football Kenya Federation says the "confounding" decision by CS Amina to order investigations into its affairs won't stutter the activities of Kandanda House to a halt.

In a communique signed and released by CEO Barry Otieno, FKF said it still remains wholly committed to the healthy development of football and will continue to undertake football development activities during the said inspection period, including the management and running of all FKF leagues across the country.

"All ongoing projects including training of coaches and the planning and staging of the upcoming Harambee Starlets AWCON qualifiers against South Sudan, scheduled for October 20 and October 23 respectively, will continue uninterrupted."

FKF said it came to learn about Amina's decision through media reports.

"The directive is confounding as FKF is unsure of the scope, terms of reference and objective of the said inspection and has formally written to the Cabinet Secretary for Sports and Culture seeking further and better particulars to enable the federation ensure compliance with the lawful and legitimate edicts of the inspection."

"Upon receipt of the requested information, the federation, whilst remaining cognizant of the powers of the Cabinet Secretary for Sports, as provided for under Article 52(1) of the Sports Act(2013) will comply with the said inspection as guided by the Sports Act (2013), FKF constitution(2017) and FIFA statutes."

“This is a welcome gesture and we urge Registrar to immediately act so as to save Kenyan football from any further defilement by its enemies who have been masquerading as its administrators for the last six years,” read the statement.

"The audit should delve, specifically, into appropriation of resources and monies disbursed to the FKF by the government of Kenya through the Sports Fund and/or the Ministry of Sports and whether the monies received have been accounted for, as provided for by the Public Finance Management Act 2012 and all other applicable Laws and/or Regulations governing expenditure and accountability of public resources."

The said although coming rather late in the day,the decision is timely.