Kenyans dominate races with wins in Paris and Amsterdam

Rotich set a course record as he crossed the line in two hours four minutes 21 seconds to finish ahead of Ethiopia’s Hailemaryam Kiros.

•Kenya’s Angela Tanui and Ethiopia’s Tamirat Tola produced the fastest ever times on Dutch soil with their victories at the TCS Amsterdam Marathon, clocking 2:17:57 and 2:03:39 at the World Athletics Elite Platinum Label road race on Sunday. 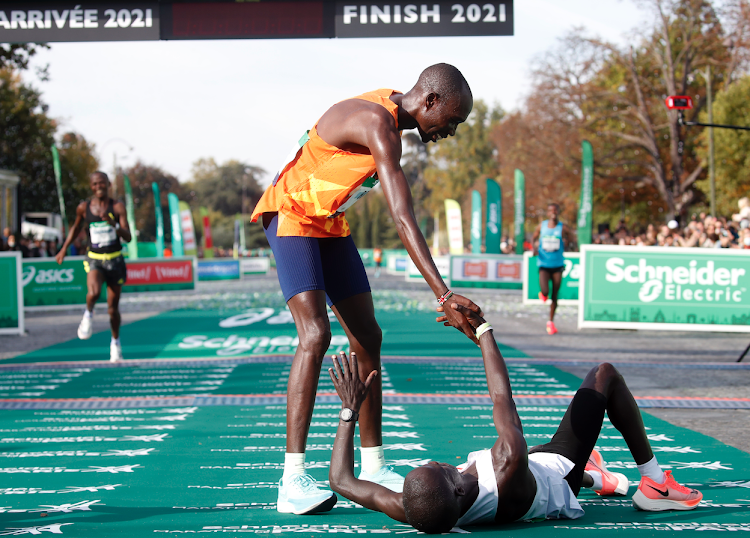 Kenyans and Ethiopians continued to share the marathon limelight around the globe as they once against dominated Paris and Amsterdam on Sunday.

Rotich set a course record as he crossed the line in two hours four minutes 21 seconds to finish ahead of Ethiopia’s Hailemaryam Kiros.

The 31-year-old Kenyan took nearly a minute off his personal best and broke Kenenisa Bekele’s seven-year course record of 2:05:04 as he picked up pace after the 25-kilometre mark. Kenya’s Hillary Kipsambu came third after slipping two spots in the final stages of the race.

In the women’s race, Memuye ran a time of two hours 26 minutes and 12 seconds after a late surge to seal the biggest win of her career. Memuye finished about three seconds ahead of Yenenesh Dinkesa with Fantu Jimma third as Ethiopians swept the podium.

The Paris Marathon, featuring 60,000 participants from 145 countries, was initially scheduled for April this year, but was delayed by six months due to the Covid -19 pandemic. Meanwhile Kenya’s Angela Tanui and Ethiopia’s Tamirat Tola produced the fastest ever times on Dutch soil with their victories at the TCS Amsterdam Marathon, clocking 2:17:57 and 2:03:39 at the World Athletics Elite Platinum Label road race on Sunday.

Tanui, who was a late addition to the field after her plans to compete in Boston fell through due to visa issues, bided her time for much of the race before breaking away in the closing stages to win by more than two minutes, covering the second half in a swift 1:07:50.

Running as part of a lead group of six, Tanui covered the first 10km in 33:00. Shortly after, Ethiopia’s Shasho Insermu dropped back from the lead pack, leaving Tanui, fellow Kenyan Maureen Chepkemoi and Ethiopia’s Haven Hailu, Gabiyanesh Ayele and Worknesh Alemu out in front.

They covered 15km in 49:48 before reaching the half-way point in 1:10:07, suggesting a sub-2:20 finish was possible with a slightly faster second half.

She continued to pull away from her pursuers in the closing stages and went on to cross the finish line in 2:17:57, smashing the previous course record of 2:19:26. She also chopped more than two minutes from her previous best of 2:20:08 set earlier this year, and now moves to 10th on the world all-time list.

Chepkemoi came through to take second place in 2:20:18, overtaking Hailu shortly before the finish. Hailu finished one second adrift in third, while Ayele was further behind in fourth (2:21:22). Ruth van der Meijden was the top Dutch finisher, placing sixth in 2:29:55 to secure the national title.

Tola, like Tanui, displayed great patience and waited until the final few kilometres before making his move in the men’s race.

After going through 30km in 1:28:33, some of the runners in the lead pack – namely Edwin and Abraham Kiptoo and Ethiopia’s marathon debutante Amdewerk Walelegn—started to drift off the pace. Just six men— Tola, Leul Gebresilase, Eritrea’s Hiskel Tewelde and Afewerki Berhane and Kenya’s Jonathan Korir and Bernard Koech—were left in the pack at the 35km point (1:42:59).

Tola then started to win up the pace and, having covered the previous 10km section in 28:53, had a nine-second gap on his opponents at the 40km point with the leading contenders now strung out.