• "We need to have a good game plan and motivate the playing unit because technically and tactically we are spot on," —Aluoch

•"Even in the absence of Mwanahalima Dogo Adam, Kenya has enough firepower in attack to enable the team sail to the next round." 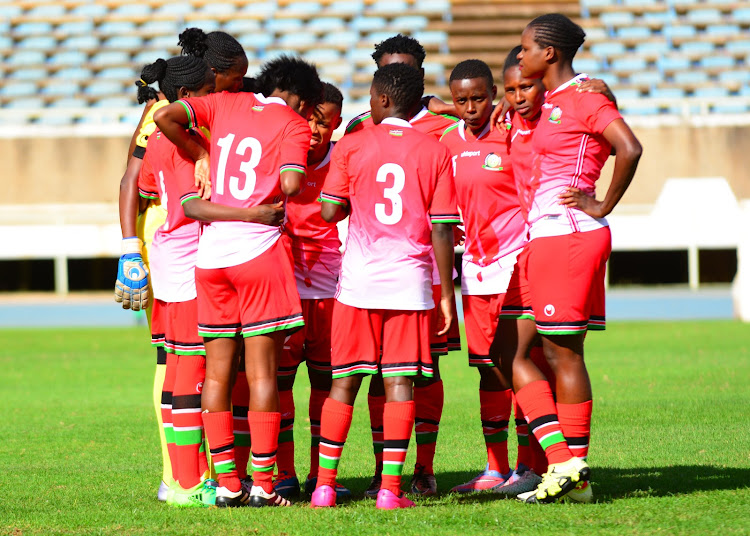 Harambee Starlets players during a past international match
Image: FILE

Harambee Starlets have the best squad in Eastern Africa but must find a winning formula against South Sudan in the African Women's Cup  of Nations qualifier on October 20 at the Nyayo Stadium.

Coach Richard Kanyi, who guided the Starlets to the semi finals of the Cosafa tournament in 2017, said in as much as Kenyans are favoured to win, coach Charles Okere must blend talent and experience.

"Without disrespect, South Sudan are beatable because they are still jumping the ropes while Starlets have a quality squad with a mixture of experienced and youth. It is up to the coach to put up a competitive and balanced team that can produce results," Kanyi said.

He added: "Coming from a competitive tournament like the Cecafa Club Championship gives Kenya an edge considering 10 of the Vihiga Queens players picked for national team duty were instrumental in guiding the club in the regional qualifiers ahead of the tournament proper in November."

Kanyi guided Thika Queens to the Kenya Women's Premier League title in 2016. His best achievement was leading Starlets to a 3-0 victory against the Copper Queens of Zambia.

Former Starlets' captain Ann Aluoch  believes even in the absence of Mwanahalima Dogo Adam, Kenyans still have enough firepower in attack to enable them sail to the next round.

"Jentrix Shikangwa, Tereza Engesha and others have the responsibility of leading the attack because Adam is unavailable. Kenya should find little trouble against South Sudan because the Starlets are the strongest regional team at the moment," she said.

Aluoch said motivation of players and a  good game plan are key in this game because technically and tactically we are spot on.

Aluoch captained the Starlets from 2014 to 2017, becoming the first skipper to guide the team to the AWCON in 2016 while turning up for Mathare United .