Matano, however, said he is impressed with the momentum and vibrancy he had witnessed in the camp.

•Tusker surmounted Djibouti’s AS Arta Solar 4-1 on aggregate to book a date with Zamalek who will be groping for their first CL title since 2002.

•The White Knights arrived in the country early Tuesday, and will seek to cast aside a disappointing campaign last season where they failed to go beyond the group stage 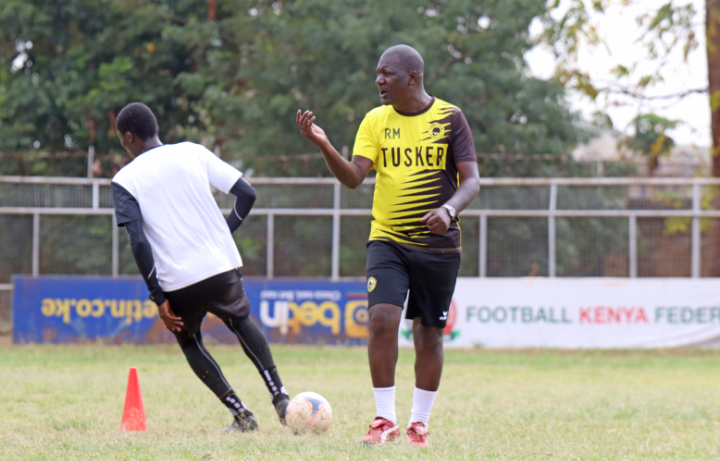 Tusker head coach Robert Matano is worried that the international break effected three weeks ago by Football Kenya Federation may harm their quest for a maiden Caf Champions League title.

The Kenyan representatives host four-time Egyptian champions, Zamalek, in a bruising Caf Champions League round of 32 encounter at Nyayo Stadium on Saturday before the return tie in Egypt a week later.

FKF suspended top tier fixtures for 21 days to give the national team, Harambee Stars, sufficient time to prepare for their World Cup qualifiers.

However, Matano now feels the break has left his players rusty and might destroy the momentum they had gathered from their opening matches of the season.

“The international break wasn't really helpful in terms of match fitness. However, it was useful in terms of injury and recovery. It helped us because we had so many injuries but now I"m glad everybody is in the camp,” said Matano.

The veteran gaffer said he had to organise two friendly encounters to keep his charges active. “We've engaged two teams in friendly matches and I believe the boys did quite well,” he said.

He observed he is happy he has finally managed to raise a full squad in training after four of his stars returned from engagements with the national team.

“On Wednesday we had a full house after some of our players returned from international duty.”

“The only player missing now is Emery Mvuyekure who is yet to return from international duty with the Rwanda national team.”

Matano, however, said he is impressed with the momentum and vibrancy he has witnessed in the camp.

“Everybody is willing to perform and I believe we'll give a good performance. I always hold talks with them to encourage them and remind them we are now on the big stage and so everybody must raise the level of his game.

“Each player must be at his best for the team to perform. If the players are not ready then there is no way the team can be ready. We need to motivate ourselves ahead of the match,” said Matano.

However, unlike Matano, Tusker midfielder Humphrey Mieno was bullish ahead of Saturday's tie. “The morale is high, pretty high. The lads are working really well, we are working as a team and we are ready for the match. We know the task ahead of us and we hope to get maximum points from the match,” said Mieno.

He said the break was really important to the side given it gave the injured players an opportunity to heal and link up with the team in good time.

Tusker surmounted Djibouti’s AS Arta Solar 4-1 on aggregate to book a date with Zamalek who will be groping for their first CL title since 2002. Zamalek got a bye in the preliminary round due to their impressive ranking on the continental stage.

The White Knights arrived in the country early Tuesday, and will seek to cast aside a disappointing campaign last season where they failed to go beyond the group stage.