Experienced fullback David "Calabar" Owino said attitude and character would determine who carries the the day.

•“We have been in the African Cup and now we are going for the World Cup. Kenya has what it is needed to qualify for the World Cup just like any other team, and that's why we are currently in second position and we are aiming to be number one," said Omar.

•Centre-back Joseph Okumu who recently made a giant leap to Belgian side Genk, echoed Omar's sentiments. 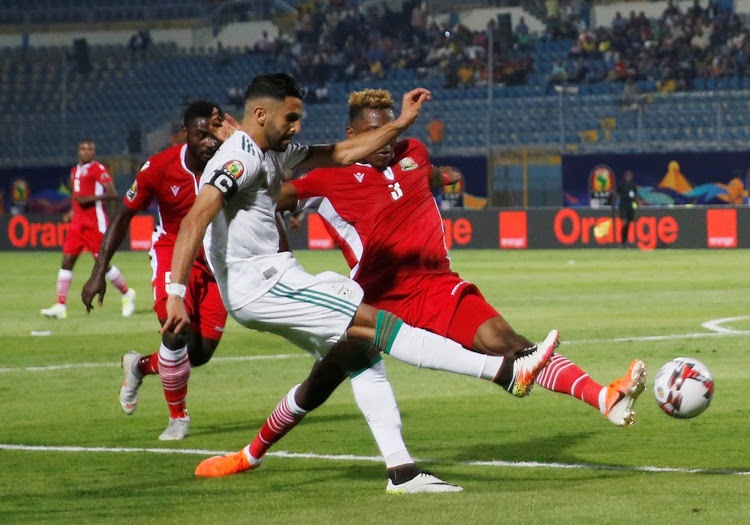 Kenya's Aboud Omar vies for the ball with Algeria's Riyad Mahrez during an Afcon match on June 24, 2019.
Image: REUTERS

The two nations square off at the Grande Stade d'Agadir in Morocco and Kenya are assured of toppling Mali from the top of the log if they trounce them by whatever margin.

“We have been to the African Cup and now we are going for the World Cup. Kenya has what is needed to qualify for the World Cup just like any other team and that's why we are currently second in the group. We now want to be on top," said Omar.

“I think we will surprise a lot of people given many of them have considered us underdogs for a very long time. The next two games will be crucial in determining our fate. Anything is bound to happen in football. We have a good team that can contain Mali," said Omar.

Centre-back Joseph Okumu, who recently made a giant leap to Belgian side Genk, echoed Omar's sentiments.

“The speculation that Mali are stronger than us might be either true or false. The most important thing is that whoever puts in more effort carries the day. With enough quality on the pitch, we shall be able to register a positive result," said Okumu.

“I wouldn't really want to dwell much on the opponents though. I'm more concerned about the quality of our team. As much as it is important to know the threat the Malians pose, we need to concentrate more on what we shall be doing to neutralise them on the pitch," said Okumu.

“In my opinion, there is no small or big team. It depends on preparations and how well you play on the material day. The opponents may have players playing in the top leagues but it all depends on attitude. With a positive attitude, we stand a chance of winning the match."

"Mali have a good team like us. We have quality, we have power so let's go for it," he said.