While Raspadori was a surprise inclusion during the summer, his elevation to the senior squad did not come completely out of the blue.

• Raspadori is Italy’s next centre-forward in the making, a man the former Manchester City manager trusts to take on a role that has been something of a problem position for the Azzurri.

• The Azzurri were the most prolific side at Euro 2020, alongside their opponents this week, with 13 goals — but Immobile scored two and fellow forward Andrea Belotti none. 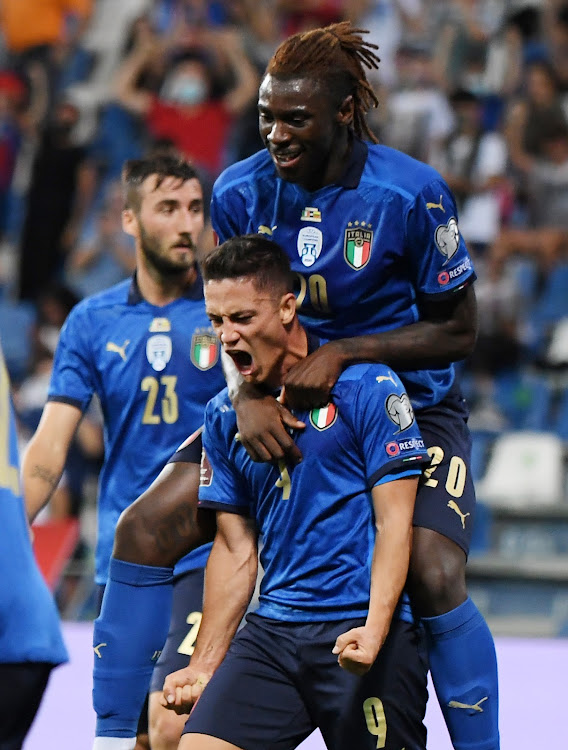 When Roberto Mancini announced his 26-man squad for Euro 2020 during a bizarre live TV show at the start of June, it was the surprise inclusion of Giacomo Raspadori that prompted most debate.

Why was this uncapped baby-faced forward — reportedly on a wage of around £2,000 per week that would be dwarfed by those of his new team-mates — included in a squad with designs on winning the trophy?

As it turned out he barely featured in their victorious Euros campaign, making just one substitute appearance, against Wales.

But Mancini’s vision is now becoming more clear. Raspadori is Italy’s next centre-forward in the making, a man the former Manchester City manager trusts to take on a role that has been something of a problem position for the Azzurri.

In the short term Mancini has this week’s Nations League semi-final against Spain on his mind, but in the longer term he sees Raspadori as a key figure for next year’s World Cup.

While Raspadori was a surprise inclusion during the summer, his elevation to the senior squad did not come completely out of the blue.

He scored six goals in 27 games for Sassuolo last season, and his double against AC Milan at San Siro in April threatened to derail the Rossoneri’s return to the Champions League.

Aged 21, he was given the captain’s armband earlier that month for a game against Roma. It was a period that cemented the status of a player who joined the club aged eight, and ensured Sassuolo would pull out all the stops to keep him.

During the summer they made almost all of their most prized assets available for sale. Manuel Locatelli and Francesco Caputo moved to Juventus and Sampdoria respectively, while Domenico Berardi and Jeremie Boga were available but eventually stayed.

Only one player was categorically going nowhere. “By no means will Giacomo leave Sassuolo,” the club’s chief executive Giovanni Carnevali said before and during the last transfer window.

Raspadori, an Inter Milan fan, is a quiet young man who combines scaring Serie A defenders with studying sports science at university. He can shoot well with both feet, can link play with his team-mates and knows where the goal is.

“I am a mix of Gianluca Vialli and Mancini,” he recently said of himself and his style of play. “I am similar to Sergio Aguero, but the striker I loved most is Samuel Eto’o.”

In June many compared his call-up to Paolo Rossi’s for the 1982 World Cup. Rossi’s was certainly unexpected too, though for a very different reason — he had just come back from a three-year ban for his involvement in the Totonero scandal.

What then happened in Spain is feted history, with Rossi finishing that tournament as top scorer.

Raspadori’s impact in the summer was nothing like that — but the hope is the Qatar World Cup could be his stage.

His emergence puts the position of Ciro Immobile under most threat. The Lazio striker will miss the Nations League finals with an injury he picked up in his club’s last Europa League game and few doubt who will start on Wednesday at the San Siro semi-final against Spain.

The Azzurri were the most prolific side at Euro 2020, alongside their opponents this week, with 13 goals — but Immobile scored two and fellow forward Andrea Belotti none.

The manager has always backed his joint top-scorers — who have eight goals each since he took over — but Mancini has also said there are no set hierarchies. Mancini took Raspadori to the Euros to integrate and prepare him for the tasks ahead and to start the succession process up front.

The 15 minutes he played in Rome against Wales were his first true taste of elite international football, having experienced only one pre-tournament friendly before that. It was remarkable how assured he looked and that has continued in the chances he has been given since the Euros.

During last month’s internationals, he came off the bench twice and started the most recent game — his full debut — against Lithuania, scoring one and forcing an own goal in an impressive display.

“I want to continue dreaming while doing what I love most,” Raspadori said recently.

Mancini is a pragmatist and, based on what Italian football has to offer, the ex-Inter boss has decided to go all in on Raspadori.

Can Immobile and Belotti represent the future, or could Sassuolo team-mate Gianluca Scamacca or Juventus’ Moise Kean — despite a modest spell at Everton — quickly develop into a proper number nine? Is there a ‘false nine’ to build Italy’s offensive game around?

Given that ‘no’ is the most likely answer to all those questions, Mancini is banking on a player he believes has all the qualities he is looking for.

“I have the skills and the body of a false nine, but also characteristics of a true nine,” Raspadori recently said of himself.

This week he is likely to get the chance to show he can emerge as Italy’s main man.