The men's 100m national record holder says defeating Africa's fastest man at the Brussels Diamond League was a dream debut for him though he finished fourth.

•The former University of Nairobi student made his Diamond League debut in Brussels last weekend where he finished an impressive fourth in 10.02

•Omanyala is now preparing for the Kip Keino Classic on September 18 at Moi Stadium, Kasarani and hopes fans will be allowed inside to cheer on their athletes 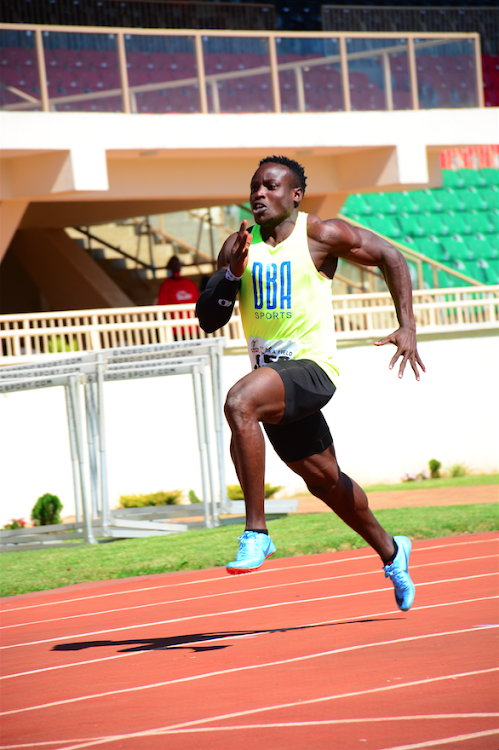 Ferdinand Omanyala in a past training session.
Image: ERICK BARASA

National record holder in the men's 100m Ferdinand Omanyala reveals he had planned on moving to rugby had his athletics career not progressed this year.

Omanyala said 2021 has turned out beyond his expectations and is still on cloud nine after a blissful year during which he has twice broken the national record.

"That was the plan. I had told myself that if things did not work out for me in athletics, then I would switch to rugby. It is amazing how God's time is the best and just when you think of giving up, he comes through for you. It has been a year of exceeded expectations," Omanyala said.

The former University of Nairobi student made his Diamond League debut in Brussels last weekend, where he finished an impressive fourth, timing 10.02 behind the United States trio of Fred Kerley (9.94), Trayvon Bromell (9.97), and Michael Norman (9.98) in first, second and third.

Before that, he had timed 9.86 in the finals of the International Josko Running Meeting in Andorf, Austria to smash his previous national record of 9.96 — set in the semis of the same meet.

He narrowly missed out on the finals of the 100m at the Tokyo Olympics after finishing third in the semis albeit he also broke the national record on that occasion when he timed 10.01.

Recalling his debut in the Belgian capital, Omanyala described it as a dream considering he had beaten, among others, South African Akani Simbine who is Africa's fastest man at 9.84.

"It was unbelievable when I looked at the results and saw that I had finished fourth and defeated among others Akani Simbine, who is Africa's fastest man. My aim was to enjoy myself since it was my debut. All in all, Simbine is a nice guy; we talked about the upcoming races and the nature of competitions and I learned a lot from him," he said. Omanyala is now preparing for the Kip Keino Classic on September 18 at Moi Stadium, Kasarani, and hopes fans will be allowed inside to cheer on their athletes.

"I hope the government considers allowing fans into the stadium. Having them there creates an electrifying atmosphere that motivates us to give our best. I am usually at my best when there is a crowd cheering me on and so I look forward to running in front of home fans," he said.

After the World Athletics Continental Tour event, Omanyala plans to take an extended break to refuel and interact with the family.

"It has been quite a long year so the Kip Keino Classic will be my last competition after which I will take a vacation. Of course, in December I will also be traveling upcountry to my rural home in Kitale where I know there will be lots of celebrations."