Dutch duo out of top of the table qualifier against Turkey

Oranje coach Louis Van Gaal said captain Virgil Van Dijk would return in defence after being rested at the weekend while Daley Blind would also return after suspension. 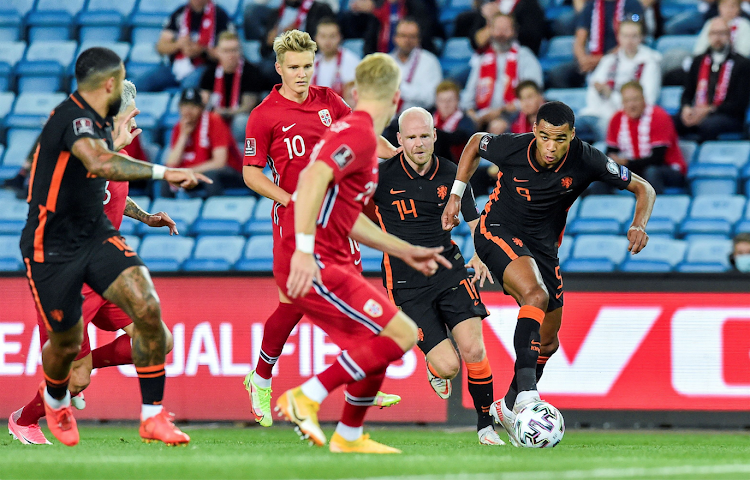 Netherlands duo Nathan Ake and Cody Gakpo are out of their country’s World Cup qualifier against Turkey in Amsterdam on Tuesday, the Dutch FA said on Monday.

Gakpo was injured after scoring in the 4-0 win over Montenegro on Saturday, while Ake was allowed to leave the camp for undisclosed personal reasons.

“It is a pity because they are important players in the squad,” said coach Louis van Gaal on the eve of the Group G tie at the Amsterdam Arena.

“Cody especially has shown great development and we will miss him because we have a shortage of wide players,” he said of the 22-year-old from PSV Eindhoven.

Van Gaal said captain Virgil Van Dijk would return in defence after being rested at the weekend while Daley Blind would also return after suspension.

Turkey have a one point lead over the Dutch at the head of the group and beat the Netherlands 4-2 in Istanbul at the start of the qualifiers in March.

"I have a good feeling about the game against Turkey, but it will not be easy. Just look at the results in the World Cup qualifiers this week. Italy have now drawn twice (in Group C),” Van Gaal told a news conference on Monday.

“I think it's a very important match for us, but it's not like it's a final. The group shows that we can all win and lose against each other, but we can now take a very important step. We play at home, which is an advantage especially now the fans are there. Against Montenegro the fans were also great.

"But Turkey can play football really well. I think this is the toughest match we will have in the group," he added.

Elsewhere, Ireland captain Seamus Coleman will miss their World Cup qualifier against Serbia due to a hamstring injury, his Premier League club Everton said on Monday.

"Everton captain Coleman was hurt in Ireland's World Cup qualifying draw with Azerbaijan in Dublin on Saturday," Everton said in a statement.

"The 32-year-old has been assessed by Everton medical staff and will continue his rehabilitation at the Club's USM Finch Farm training headquarters."

Ireland have called up Cyrus Christie as the defender's replacement.

The Irish are fourth in Group A with one point after four games, nine behind leaders Serbia, having snatched a 1-1 draw at home to bottom side Azerbaijan on Saturday.