The coach watched as a last-gasp strike from Jentrix Shikangwa earned the Kenyans a hard-fought 2-1 win over Tanzania's Simba Queens in Cecafa qualifiers semis.

•The tactician added that their tactical strategy had paid dividends as they came out guns blazing in the second half after a quiet first half.

•Aisha Juma justified her introduction in the 69th minute when she poked home from close range after a defensive mix-up in Vihiga's box. 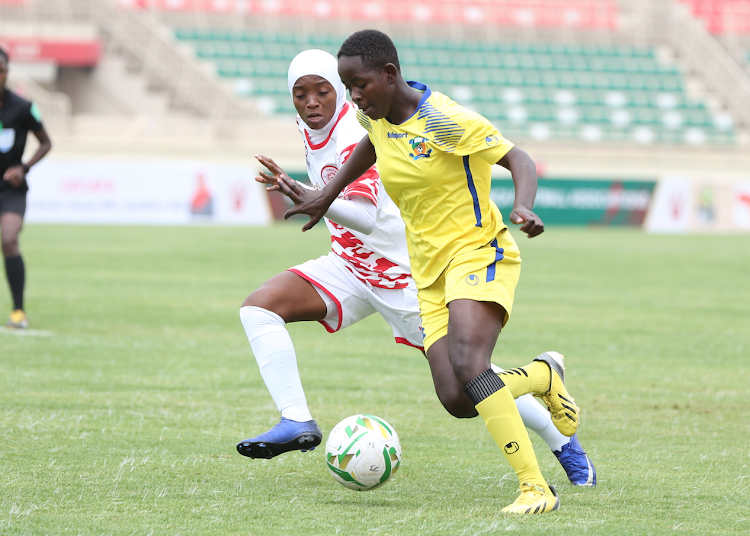 Vihiga Queens' Jentrix Shikangwa battles for the ball with Simba Queens' Fatuma Suleimani during the semi-finals of the CECAFA qualifiers for CAF Champions League at Nyayo Stadium.
Image: ERICK BARASA

Vihiga Queens' coach Boniface Nyamunyamu is optimistic his charges will excel in the final of the Cecafa qualifiers and secure their ticket to the inaugural CAF Women's Champions League.

Nyamunyamu watched as a last-gasp header from Jentrix Shikangwa earned the Kenyan representatives a hard-fought 2-1 win over Tanzania's Simba Queens in the semis played at the Nyayo Stadium.

"We are optimistic that we can win the final and make the nation proud by heading to the inaugural women's Champions League in Egypt. The team is oozing with confidence and we are ready for the final," Nyamunyamu said.

The tactician added that their tactical strategy paid dividends as they came out guns blazing in the second half after a quiet opening period.

"We were reserved in the first half, trying to study their weaknesses. The team went full throttle after the restart and we knew they could not catch up with our pace. The decision to bring on Janet Bundi was justified. She's electric and drew a foul and we scored from the resultant freekick," said Nyamunyamu.

Vihiga threatened early on with striker Tereza Engesha scuffing her shot wide after being teed up by midfield dynamo Maureen Achieng.

In the sixth minute, the visitors' explosive winger Mawete Musolo's clever run from the left flank enabled her to escape two challenges only for her shot to fall kindly onto the hands of Lilian Awuor.

Both teams were satisfied to head into halftime with a 0-0 scoreline. Vihiga re-emerged from the tunnel the better side.

A quick counterattack allowed the Kenya Women Premier League side to venture forward but a misplaced pass from Engesha let them down.

Simba made the first substitution with Maimuna Kaimi replacing the injured captain.

Shortly after, the hosts took the lead through Achieng, who headed home in the 63rd minute following lacklustre defending from Simba.

In the 69th minute, Ruth Kipoi was rested for Aisha Juma as Simba searched for the equaliser and the new entrant justified her introduction a minute later when she poked home from close range after a defensive mix-up in Vihiga's box.

The goal seemed to have injected life into Simba who then attacked with zest.

Shikangwa thought she had given Vihiga the lead only for her thunderous shot to hit the side netting.

Vihiga's Janet Bundi came on for Violet Wanyonyi and subsequently won a set-piece.

Shikangwa finally broke the Tanzanians' hearts, heading home from a free kick in the 87th minute to take her tally in the tournament to five.