Such incidents of chest-thumping and grandstanding can only send the ship sinking further.

•Trouble began when the two clubs issued a joint statement clearly stating their firm resolve to give their Mashemeji Derby fixture a wide berth even as FKF honcho Nick Mwendwa dared them to make good their threat.

•But in a rejoinder, FKF accused Rachier and Shikanda of playing to gallery given the federation had already drafted a letter on July 8 committing to offset the dues by August 5. 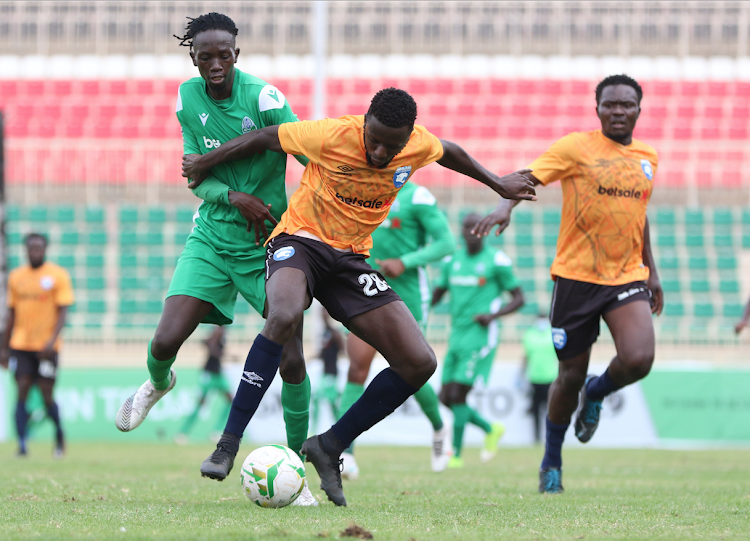 The Kenyan football scene is at its lowest ebb in history.

July 31 should have witnessed a historic 91st Mashemeji derby. However, the much-anticipated tie pitting Gor Mahia against traditional arch-rivals AFC Leopards at Thika Stadium ended in bizarre fashion as both sides spurned the venue at the eleventh hour.

Gor and Leopards said they had a bone to pick with Football Kenya Federation who are yet to pay them the Betway Cup prize money they won after emerging champions and runners-up in the final played at Nyayo Stadium on July 4.

Trouble began when the two clubs issued a joint press release that stated their firm resolve to give the match a wide berth even as FKF honcho Nick Mwendwa dared them to make good their threat.

A day later, the sides kept their word much to the chagrin of the local football fraternity. Instead of making a trip to Thika to honour the match, Gor and Leopards struck a gentleman's agreement to converge at Nairobi's Camp Toyoyo for a friendly match.

The move sparked outrage among football fans and FKF responded with hefty fines that sank the two giants into further financial difficulties amidst their existing woes.

Rachier and Shikanda had issued a joint statement on the eve of the match reiterating their intentions to give it a wide berth.

But in a rejoinder, FKF accused Rachier and Shikanda of playing to the gallery, given the federation had already drafted a letter on July 8 committing to offset the existing dues by August 5.

The Mwendwa-led administration subsequently asked the two clubs to provide their bank account numbers, a move Rachier trashed as a public relations gimmick, insisting FKF already had what they were asking for.

However, Mwendwa stated clearly why they were requesting to have the bank details afresh.

"There is a conflict of interest in the leadership of the affected clubs. The officials seem to have differing opinions on how they intend to receive the money. Whereas some have called us to have the amount deposited in club accounts, there are those who insist they want cash," said Mwendwa.

"That's why we sat down as a federation and decided to ask for new banking details so that we can be sure where exactly to deposit the money owed to the clubs," he added.

When elephants fight, it is the grass that suffers. The real victims of the prevailing chaos are football players — who must now grapple with unpaid dues as long as the standoff persists.

Neither FKF nor the club officials stand to benefit from the ongoing antagonism. While it is true the federation owes the two clubs some money, disregarding fixtures serves little to resolve the dispute. They should honour their matches as they wait for FKF to fulfill their side of the bargain.

Such incidents of chest-thumping and grandstanding can only send the ship sinking further.

Both FKF and the clubs must now move swiftly to soften their hard stance and forge unity of purpose if the country is to attain any meaningful heights in football.