Eyes on renegade clubs as FKF-PL enters Round 30

Both Gor and Leopards stare at possible relegation if they fail to honor another two matches each.

•Leopards have an engagement with Nairobi City Stars at Ruaraka Grounds this afternoon.

•On the other hand, Gor have been pitted against Kakamega Homeboyz at Thika Stadium on Wednesday. 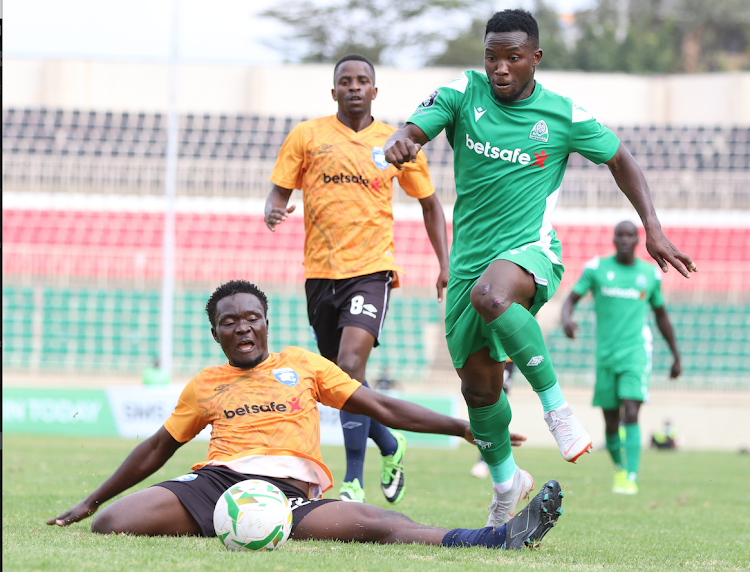 Will Gor Mahia and AFC Leopards call off their dissent against Football Kenya Federation and honor their remaining league fixtures?

That's the elephant in the room as the Kenyan Premier League action cruises into its 30th round this week.

Gor and Leopards threw the local football arena into unprecedented turmoil following their shock decision to give Mashemeji Derby a wide berth at Thika Stadium on Saturday. The move attracted the full wrath of FKF who responded with hefty fines on both clubs.

The sides now stare at possible relegation if they fail to honor their next two matches.

Leopards face Nairobi City Stars at Ruaraka Grounds this afternoon. The coach Patrick Aussems-led charges who have 41 points, slumped from fourth to unimpressive sixth on the log following FKF's decision to dock three points after they snubbed the derby.

On the other hand, Gor have been pitted against Kakamega Homeboyz at Thika Stadium on Wednesday. K'Ogalo too had their points deducted following the boycott. The penalty has sent them nosediving into 11th with 37 points.

Their opponents, Homeboyz, are in fourth with 43 points and a win could take them to third given they are 11 points behind second-placed KCB.

Leaders Tusker will look to widen the gap on second-placed KCB when they flex muscles with Coastal side Bandari at Mbaraki Sports Club in Mombasa on Wednesday. The brewers sit at the top of the log with 55 points, one clear of KCB.

The bankers have a tricky fixture against Western Stima at Moi Stadium in Kisumu on Wednesday. Both Tusker and KCB lost in their last encounters. Stima are 15th on the log with 21 points, only a spot above the relegation zone.

Bidco United are set to host Wazito at Thika Stadium on Tuesday. While the FKF-PL debutantes are tenth with 38 points, Wazito are seventh with 41. The moneybags will, however, miss the services of left fullback Dennis Ng'ang'a who quit the side in a huff citing a salary dispute.

Posta Rangers will lock horns with Vihiga United at Thika Stadium on Tuesday. The mailmen are 12th on the log with 31 points while Vihiga are 16th with 20 points, just a spot above bottom-placed Mathare United.

The Slum Boys are gearing for a match against Kariobangi Sharks at Thika Stadium on Wednesday.

Sofapaka and Nzoia Sugar will settle scores at Ruaraka Grounds on Wednesday. Whereas Sofapaka are 13th with 30 points, the millers are 14th with 26.