K’Ogalo custodian Gad Mathews was the toast of the day throwing himself on the path of the ball to block Geoffrey Lemu’s shot from the spot in the opening minutes of the second. 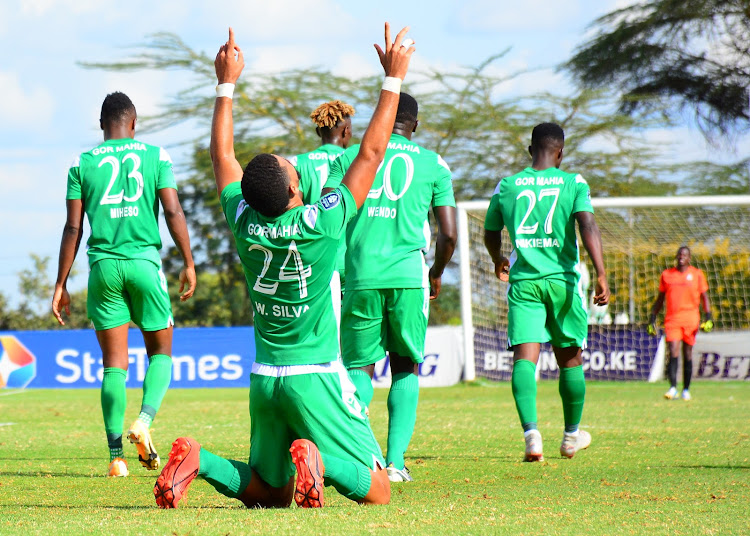 Gor Mahia's Wilson Silva celebrates after scoring against Bidco during a past Premier League match at Moi Stadium, Kasarani.

Pinto said Bidco have so far exhibited great mettle in the top-flight league and the domestic cup by pulling off major upsets against more fancied traditional giants.

“I'll definitely take some time to study them closely to see what exactly coach Anthony Akhulia has been doing extra. We definitely cannot underestimate the threat they pose on our way to the finals,” Pinto said.

K’Ogalo put up an abrasive challenge to fend off the marauding Kariobangi Sharks, pipping  them 2-0 at Utalii Grounds on Wednesday.

On the other hand, the Thika-based newbies stunned pre-match favourites Nairobi City Stars 1-0 at Ruaraka Grounds.

David Orem's 21st minute goal was all it took to separate the sides.

At Utalii, Burkinabe Karim Abdoul drew first blood in the first half before Sydney Ochieng emerged from the bench to seal Shark's fate with a few minutes left to full time.

K’Ogalo custodian Gad Mathews was the toast of the day, throwing himself on the path of the ball to block skipper Geoffrey Lemu’s shot from the spot in the opening minutes of the second half.

Sharks coach William Muluya defended Lemu  for missing the chance to bring his side back into the game while the score was still 1-0.

“Well, it happens. Lemu may have missed the penalty but we should also give Mathews the credit he deserves for denying him the goal,” Muluya said, adding that Sharks would now shift their focus to charging for the top tier title.