Little did he know that participating in a village tournament would be the preamble to his success narrative. Unbeknownst to him, he had hitched his wagon to a star.

•His most cherished memory was his maiden appearance for the national team in the African Cup of Nations qualifier against Togo in Lome where Kenya won 2-0.

•His critics thought this being his first match, he'd end up being as awkward as a cow on roller skates. He proved them entirely wrong. 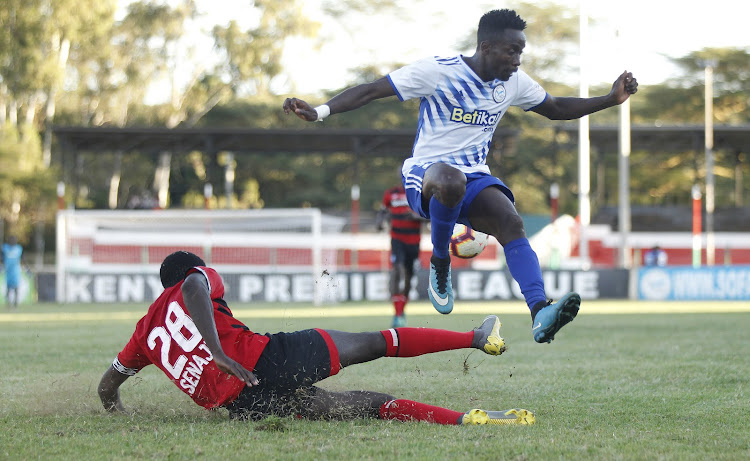 As soon as the national team Harambee Stars were done with their last African Cup of Nations qualifier against Togo in Lome, head coach Jacob 'Ghost' Mulee came down on foreign-based players like a ton of bricks.

He candidly warned the luminaries to brace for cut-throat competition, given Football Kenya Federation Premier League currently bubbles with fresh talent capable of replacing them any day, any time.

And while at it, Mulee extolled locally-based players for proving their mettle in their final two Afcon qualifiers against Egypt in Nairobi and Togo in Lome where they drew 1-1 and won 2-1 respectively.

The centre-back secured his maiden senior call-up under the wire, exactly a day before Stars traveled to Togo. He was briskly summoned to fit in the shoes of Wazito's Johnstone Omurwa, who was suspended after picking a straight red against the Pharaohs of Egypt at Moi Stadium, Kasarani.

"I believe talent is talent. I'm very proud of our local boys as well as Football Kenya Federation Premier League, who gave us an opportunity to select good players," observed Mulee.

"If you are a good player and you are in a tough league, you can be called to play for the national team anytime.”

Those who have been keen on the FKF-PL understand too well why Mulee showered the youngster with inundated praise. He is by all means ahead of the pack in his trade. 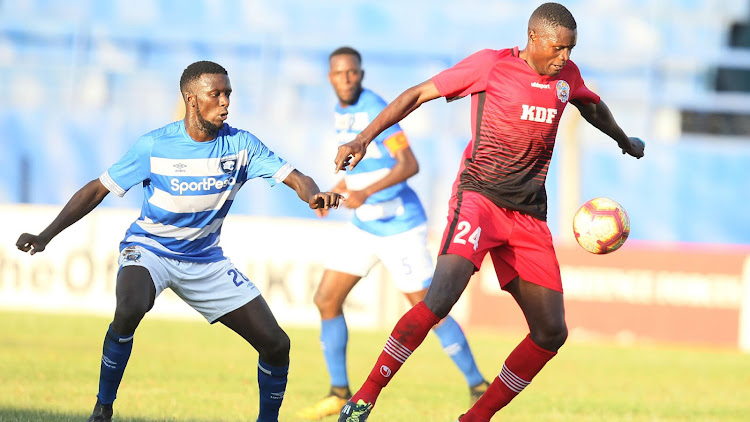 Senaji has been right at the heart of AFC Leopards’ formidable defence this season. The 13-time Kenyan Premier League champions are currently placed third on the FKF-PL log and there is every indication from the matches they have already played they badly want the title back.

The third-born in a family of four boys and two girls, Senaji was born on June 26, 1996, in Kariokor, Nairobi County.

On the pitch, Senaji is a committed defender who literally puts his head in the lion's mouth to fend off menacing inroads from marauding opponents.

Besides, he is also as sly as a fox. He employs his exceptional technical expertise to confound and expose opponents to agonizing public ridicule by pulling off cheeky stunts on them.

Senaji's humble beginnings in football can be traced back to the dusty pitches of Ziwani Estate in Nairobi, where he learned the basics while turning out for a youth development outfit in the neighbourhood.

“At seven years, I was already turning out for Kabanze Foundation in Ziwani in Nairobi, where I was introduced to football by coach Tom Skinde.

Unlike most Kenyan footballers who sharpen their skills in primary school, Senaji curiously gave the game a wide berth during his years at Juja Road.

“I never played football during my years at Juja Road Primary School. All my focus was at Kabanze Foundation. I would train with the side everyday after school and during the weekends.”

He remained aloof to school competitions until in the year 2009 when he proceeded to Cardinal Otunga High School after sitting his Kenya Certificate of Primary Education.

“I joined Cardinal Otunga High School in 2009 after my Kenya Certificate of Primary Education.

“In 2010, when I was in Form Two, our school team performed so well and we proceeded to the national finals of the Kenya Secondary School Games in Kisumu.

“We were, however, eliminated at the preliminaries due to inexperience. All along our demanding journey, we were being guided in the competitions by our games teacher Mr. Mayaka" added Senaji..

“Owing to personal reasons I left Cardinal Otunga a couple of years later to join Banja High School where I attended Form Three and Four. It was while at Banja that I became actively involved in football and got to play regularly. 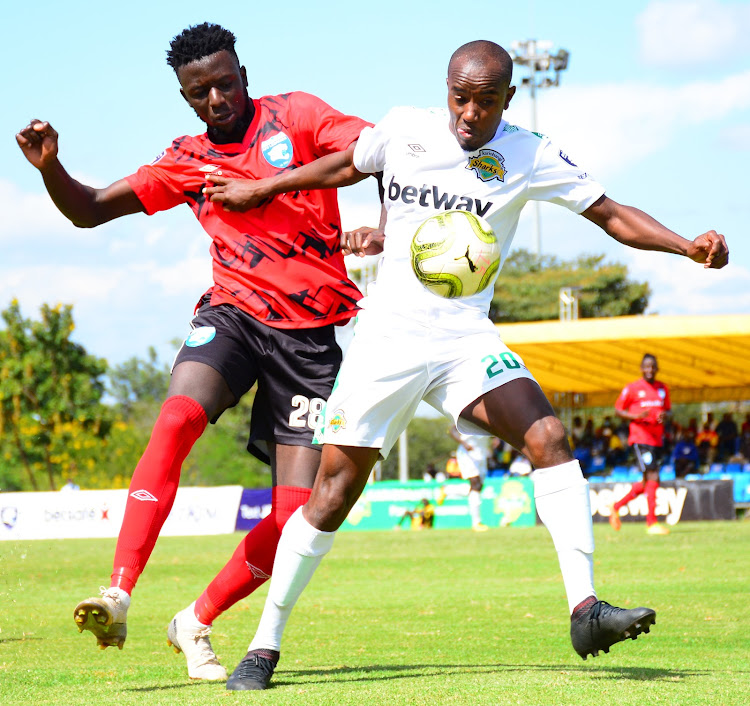 At home, he was transacting business with Umeme Football Club in the Football Kenya Federation Nairobi county league.

His major breakthrough came when a village team in Vihiga drafted him to help battle for the title at Agoi Football Tournament which had been sponsored by a local Member of Parliament.

“I happened to have traveled upcountry and our village team invited me to feature in Agoi Cup tournament held in Vihiga in 2016.

Little did he know that participating in a village tournament would be the preamble to his success narrative. Unbeknownst to him, he had hitched his wagon to a star.

Among the enthusiastic spectators who followed up on all the matches faithfully was then-Vihiga United head coach Edward Manoah.

Manoah was instantly impressed with Senaji's exploits on the pitch.

“Vihiga were still participating in the National Super League and coach Edward Manoah invited me to join the side after he watched me play in the tournament.”

“Manoah was convinced I had great potential and it wasn't long before he handed me my maiden minutes in our National Super League encounter against KCB. We edged them 1-0,” said Senaji.

“I turned out for Vihiga for two good seasons and helped them gain promotion to the top tier.

Senaji's curve was on the rise. A couple of years later AFC Leopards came knocking on his door with an enticing offer that he couldn't just resist.

“Thereafter, I penned a deal with AFC Leopards. I got an offer from then-head coach Robert Matano who had been following my performance keenly when I was still at Vihiga.

He ultimately moved to the den but briefly left to join Tusker for a season.

His stint with the Brewers was anticlimactic after he was released for allegedly failing to attend training without permission amidst speculations he was in talks with Zambian Super League side Kabwe Warriors.

Senaji relives his best memories on the pitch. After the coach had turned a blind eye on him for quite a while, he was eventually handed an opportunity which he made good use of.

“My best top-flight match ever was our encounter against Sofapaka when I turned out for Leopards. We beat them 1-0 at Kenyatta Stadium in Machakos,” said Senaji.

“I had stayed out of action for close to four months given the we had a big competitive squad. I was elated to win my first game after such a long time on the bench.” 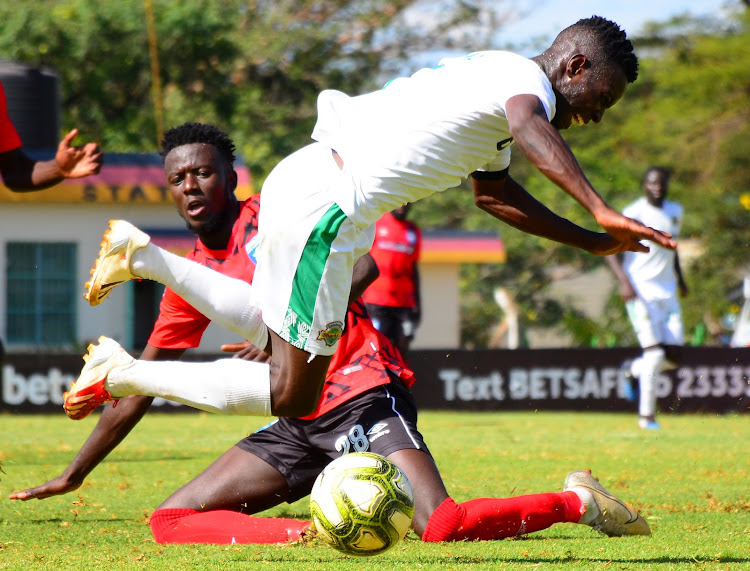 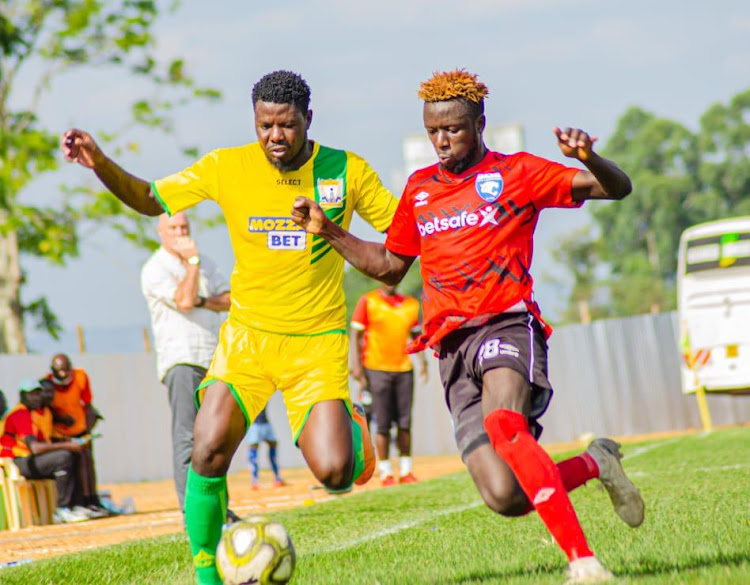 Clyde Sineji of AFC Leopards battles for the ball with Allan Wanga of Kakamega Homeboyz during a past FKF-PL match at Bukhungu Stadium, Kakamega.
Image: COURTESY

Senaji is, however, also quick to point out that all has not been rosy. Many were also the days he indeed woke up on the wrong side of the bed.

“My worst match ever was when I turned out for Leopards against Tusker. Things didn't just turn out for on that particular day,” said Senaji.

His most cherished memory was his maiden appearance for the national team in the African Cup of Nations qualifier against Togo in Lome where Kenya won 2-0.

Senaji was hurriedly picked to replace Anthony Akumu who was unavailable for duty due to some pressing family concerns, and the AFC Leopards man didn't disappoint at all.

His critics thought this being his first match, he'd end up being as awkward as a cow on roller skates. He proved them entirely wrong.

“It was the first time I was receiving a senior call-up. I felt out of this world......it was a dream come true,” he added.

“I wasn't in anyway under pressure to perform. The coach gave us the freedom to enjoy ourselves in the match as we battled for a win.”

“My immediate objectives are to earn more caps in the national team and feature in the forthcoming World Cup qualifiers.

Senaji says he was bouyed by his parents' endless support, given his father Martin Navade and mother Judith, provided him with everything he needed to play football well enough.

“I received a lot of support from my parents although they still wanted me to work hard in school. They would provide all I needed to play football.”

He doesn't have to look further than home for inspiration on the pitch. Harambee Stars skipper who turns out for Al Duhail in Qatar's premiership is the source of his motivation.

“Michael Olunga inspires me a lot locally whereas I draw a lot of motivation from Tony Kroos on the international stage.”

He who learns teaches. Senaji advises budding footballers that there are no shortcuts to the top of the palm tree.

“Upcoming footballers should learn to work extremely hard and God will handle the rest,” sats Senaji.

The 24-year-old says he is still single and spends his free time listening to music and watching television.