Moyes welcomed back Michail Antonio from injury, and the striker responded by netting both goals for the Hammers.

•The Hammers rose to fifth in the Premier League table, three points behind Chelsea in the final Champions League spot with four games left to play.

•Elsewhere, relegation-threatened West Bromwich Albion fought back to claim a 1-1 draw with Wolverhampton Wanderers on Monday but failure to win the match at The Hawthorns moved them closer to dropping out of the Premier League 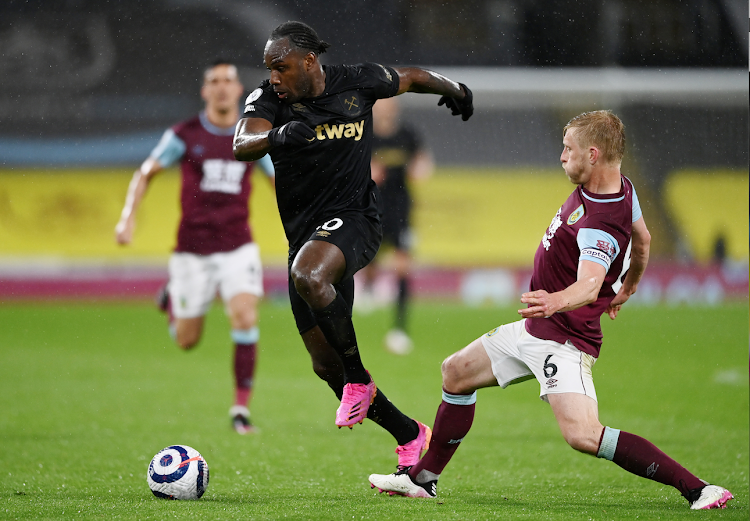 West Ham United boss David Moyes picked an attacking side and told them to “go for it” against Burnley and they responded by racking up 22 shots on goal in a 2-1 win that puts them within touching distance of Champions League football next season.

The Hammers rose to fifth in the Premier League table, three points behind Chelsea in the final Champions League spot with four games left to play.

“I’m hoping with four games to go, people still talk about us and the Champions League. We want to take it down to the final day and try to sneak in,” Moyes told BBC Sport.

“It will probably need us to win all four games. Europe would be an incredible achievement. I think I’ll be disappointed if we don’t get there now.

“Most of the games this season we’ve played very well. We’ve missed some players through injury which has affected us. We’ll keep going, we’re not going away.”

Moyes welcomed back Michail Antonio from injury, and the striker responded by netting both goals for the Hammers.

“Michail Antonio made a great impact. He’s come back in good condition, good shape ... he’s a big influence in the team and we’re glad to have him back,” Moyes said.

With Burnley nine points above the relegation zone, their survival in the Premier League is not yet mathematically ensured but manager Sean Dyche believes they are treading in the right direction.

“They (West Ham) are chasing Champions League spot and we are trying to look after ourselves. We didn’t go too far wrong. Our level of performance has been good,” he told Sky Sports.

Elsewhere, relegation-threatened West Bromwich Albion fought back to claim a 1-1 draw with Wolverhampton Wanderers on Monday but failure to win the match at The Hawthorns moved them closer to dropping out of the Premier League.

Mbaye Diagne equalised for the home side after Fabio Silva had handed Wolves the halftime lead in a Black Country derby that was hampered by belting rain and swirling wind.

The point moved second-from-bottom West Brom to 26 points, still 10 away from the safety zone with only four games remaining. Wolves remained in 12th spot with 42 points.

West Brom were overwhelmed in the early exchanges, so much so that manager Sam Allardyce took off defender Dara O’Shea to beef up the midfield with Matt Phillips after only 33 minutes.

The tactical switch came just after Sam Johnstone had tipped over an effort from Wolves’ flying fullback Nelson Semedo, who dispossessed Baggies defender Semi Ajayi in the penalty area and managed get a shot off.

Allardyce’s change quickly led to West Brom’s first effort as Diagne headed an inviting ball back across the face of the visitors’ goal that Romain Saiss scrambled clear.

But on the stroke of halftime Wolves went ahead after a swift passing move set up by American Owen Otasowie and finished by teenager Fabio Silva, whose effort took a deflection off Kyle Bartley to loop up and over Johnstone’s head. Following the break, when Mike Dean took over refereeing duties from an injured Paul Tierney, West Brom looked a lot livelier as both Conor Townsend and Conor Gallagher had efforts at goal that Rui Patricio did well to stop.

But the Wolves keeper was rooted to the ground when Diagne equalised in the 62nd minute. A long, high cross from Townsend on the left fell perfectly for the tall Senegal striker, who barely moved as he powered home a header from a standing position.

The atrocious weather got worse in the last 20 minutes, limiting opportunity for both sides.

West Brom, who travel to Arsenal next Sunday, are now left with only four games to save their Premier League status.

“We can only hope all the others lose above us and we win all four games. That extra two points would have given us a little bit more,” Allardyce said.