It's too early to pop champagne, Sharks coach warns the brewers

“The title could swing either way. Any of the teams currently in the top eight can win the league especially considering they are separated from each other only by a few points.”

•Muluya said they have put adequate measures in place to bring their players back to the desired level of fitness.

•Sharks captain Eric Kapaito said although they had not been training as a unit, he was sure they would gather momentum with time. 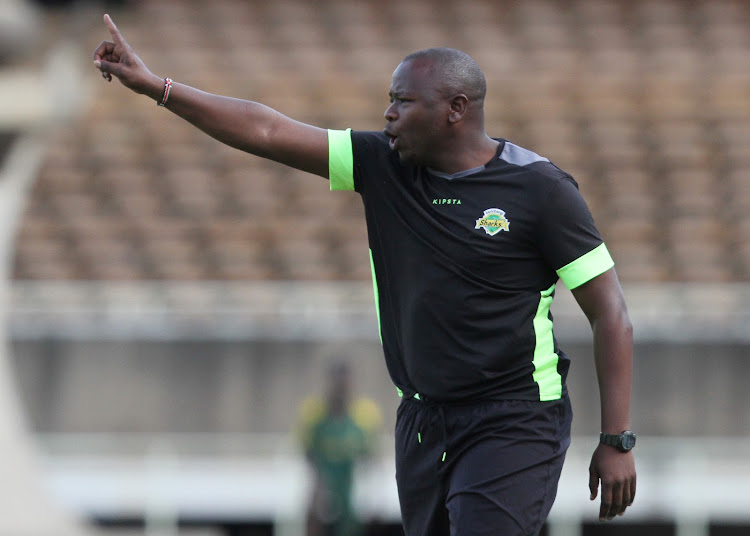 Kariobangi Sharks head coach William Muluya says the Football Kenya Federation Premier League title could go to any of the top eight teams in the league despite Tusker’s firm position at the summit.

With only two more rounds left to complete the first half of the season, the brewers have taken a commanding lead with 36 points, six clear of second-placed KCB.

However, Muluya, who also doubles up as national team assistant coach, says the battle is far from over.

“The title could swing either way. Any of the teams currently in the top eight can win the league especially considering they are separated from each other only by a few points.

“All we need to do now is to ensure we keep up with the tempo and everything else will definitely fall in place.

Muluya said they have put adequate measures in place to bring their players back to the desired level of fitness.

“Once we resume training, we will sub-divide them into small groups to ensure they regain their fitness in the shortest time possible.”

Muluya quickly pointed out his statement shouldn't be misconstrued to mean his charges are now rusty and creaky, given they had meticulously been subjected to individual training sessions during the break.

“I believe our players are professionals and they'd definitely realise the importance of training even without being pushed to do so. We usually ask for reports to follow up on their progress,” he added. Muluya said their injury concerns could soon be over.

“Our defender Samuel Olwande is on the recovery path after successfully undergoing an ankle operation at the AIC Kijabe Hospital on Friday.

The 32-year-old Kenyan international suffered a torn cartilage in Sharks' opening encounter against Wazito at Moi Stadium, Kasarani which they won 4-0.

“Other than Olwande,  there is also Patrick Ngunyi as well as Patrick Otieno, who all suffered knee injuries but both of them have been treated and are on the path to full recovery.”

“I don't think the league will kick off straight away. There is a likelihood the federation could give teams at least a week or so to train before they can start their matches.

Sharks captain Eric Kapaito said although they had not been training as a unit, he was sure they would gather momentum with time.

“We always made ourselves fit through individual training programs and working out with friends in the neighbourhood.

“Most of the top flight players are not fit enough to resume competition, well, but then waiting any longer won't help either. I believe we can pick up with time. The more matches we play, the more we shall regain fitness," he said.

Currently placed fourth on the log, Kapaito believes this is Sharks' season to clinch their dream maiden top flight title.

“Sharks can win the league this season. At position four this far, we stand a good chance to  win the title and I know we definitely can.

The Harambee Stars' hitman has amassed a whopping 14 goals from their matches so far to place him at the top of the scorers' chart and believes he can wrap up the season with the 'Golden Boot' award.

“I intend to work hard, to push myself even further so that I can convert all the chances that come my way.