Starlets made their maiden appearance in the 2016 AWCON in Cameroon

•The 24-year-old said Kenyans have what it takes to overcome Tanzania and take their position in the biannual event.

•Starlets defied all odds to bag the Cecafa women's title in 2019 after beating Tanzania. 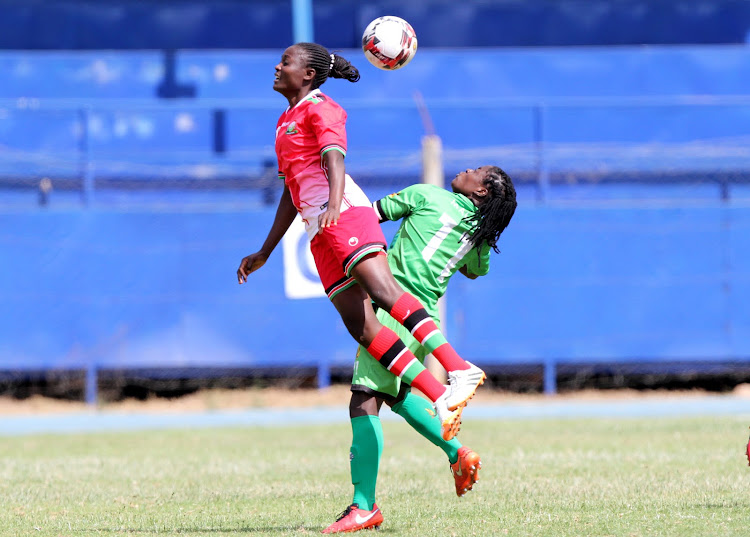 Kenya's Ruth Ingosi towers over Malawian opponent in a past match
Image: COURTESY

Dependable Harambee Starlets defender Ruth Ingosi believes early goals will be an ammunition for Starlets when they tackle Tanzania in the  Africa Women's Cup of Nations qualifiers in June.

The international defender, who plays for Ael Champions in Cyprus, has formed a formidable partnership with captain Dorcas Shikobe at the heart of the Starlets defence. She was part of the Starlets team that was assembled for a friendly match against the Copper Queens of Zambia before being cancelled in April.

The 24-year-old said Kenyans have what it takes to overcome Tanzania and take their position in the biannual event. Starlets defied all odds to bag the Cecafa women's title in 2019 after beating Tanzania.

"Bagging early goals is the secret weapon if we hope to deal a blow to our opponents.

"The team needs to play on the front foot and get the job done probably by half-time. Strikers should do their job as defenders keep opponents at bay.

"Getting the job done early gives you an edge and relieves pressure from the team," said the outstanding defender,who ensured the Starlets did not concede a goal in Cecafa.

"We want to play at AWCON for the second time in our history. The current squad has what it takes to fly Kenya's flag next year."

Starlets made their maiden appearance in the 2016 showpiece in Cameroon

Ingosi helped Ael Champions finish fourth in the 10-team league last month. The former Eldoret Falcons player was first called up for national team duties in 2017 but did not have all the documents.

She didn't feature in 2018 again because of the same problem but made a breakthrough in 2019. She was part of the Starlets team that failed at the penultimate stage of the Olympic qualifiers as she took  to the field against Malawi, Zambia and Ghana.

The Kakamega-born athlete urged young players to maximise on their talent to realise their dreams.

The competitive nature of the Kenyan league makes Ingosi believe everything is possible with regard to playing abroad.

"It won't be good for the upcoming players to sit on their talent. They have to fight for their careers. The WPL is cut-throat and this gives us an edge over the other countries ."