A source says Coach Ouma annoyed federation by fighting off attempts to interfere with team selection.

• Ouma's exit caught local football enthusiasts by surprise given FKF had not shown any palpable signs they had some mischief up their sleeves. 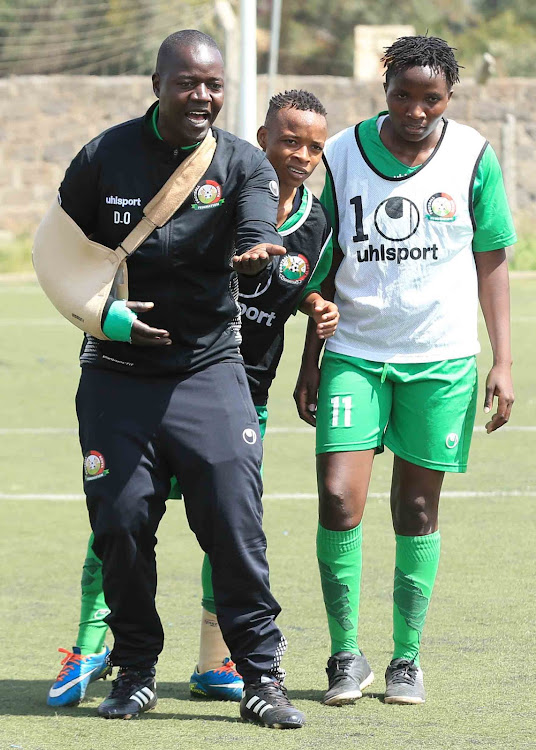 On Monday, Football Kenya Federation whipped up yet another controversy.

Ouma's exit caught local football enthusiasts by surprise given FKF had not shown any palpable signs they had some mischief up their sleeves.

In fact, FKF announced the previous day Ouma would retain his role as head coach with Okere deputising him.

Whatever happened thereafter to warrant a blistering coupé that sent Ouma's head rolling is anyone's guess.

An impeccable source privy to the development said Ouma poked Mwendwa's administration in the eye after he aggressively fought off attempts to interfere with team selection.

“A day after Ouma named the provisional squad for the forthcoming international friendly match against Copper Queens of Zambia, some highly placed individuals at the federation raised concerns about the absence of certain players in the team.

“They expressed their displeasure with the coach who didn't take their complaints lightly,” said the source.

According to the source, Ouma was also ill-starred when the technical bench was overhauled without his thoughts being taken into consideration.

“Ouma felt offended by the decision to sideline Beldine and Jackline,” added the source.

Only hours after FKF appointed Okere to his new role, disgruntled Kenya Women's Premier League tacticians came out to deride the move.

Little did they know Okere would be smirking in triumph the following day.

Okere was picked ahead of seasoned KWPL coaches, including Vihiga's Alex Alumira, who has guided his side to three consecutive league titles.

“All in all, I think his appointment might work out favourably in the long run. The main problem we've encountered when a coach is drawn from the women's league is favouritism.

“Coaches tend to favour their own players and they end up giving them more slots in the national team. Getting a neutral person to handle the national team will effectively solve the problem.

“My main worry is that a coach who is not involved with a team in the KWPL might experience difficulties in knowing the strengths and weaknesses of the selected players given he has not been keen on their performance," Githua said.