•Mwendwa was optimistic about Kenya's chances of proceeding past their opponents in the World Cup qualifiers.

•The Stars have been pooled alongside neighbors Uganda, Mali and Rwanda in Group 'E'. 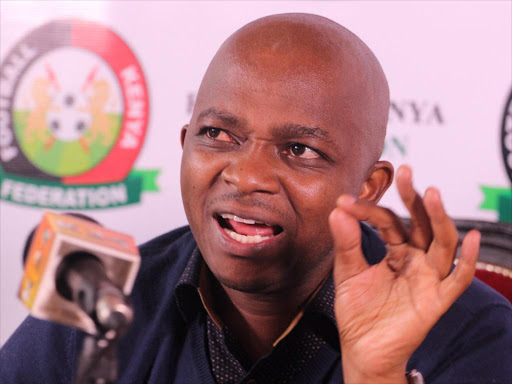 Mwendwa said on Friday they would have to find alternative ways of preparing the national teams as it was now becoming clear the government won't be okaying the resumption of sports anytime soon.

“It is becoming clear that it will be long before the government okays the return of football in the country,” Mwendwa said Friday.

“We have already approached them for the way forward but it appears now that the clearance might take longer than we had anticipated.

Both Harambee Stars and Harambee Starlets have important engagements ahead starting July. Starlets will, however, need to travel soon to Zambia for a friendly match against the Copper Queens set for April 24.

“It, therefore, means we must come up with other ways of preparing our teams for the forthcoming major competitions, including the men’s World Cup qualifier opening game against Uganda on June 5 and the girls' Awcon qualifiers,” said Mwendwa.

Mwendwa was optimistic about Kenya's chances of proceeding past their opponents in the World Cup qualifiers. The Stars have been pooled alongside neighbours Uganda, Mali, and Rwanda in Group 'E'.

“Harambee Stars stand a good chance to qualify to make it to the World Cup finals considering the group we are in.

“It's important we brainstorm for alternative preparations as we wait to see when the government will okay the resumption of football in the country.

“The ball is now in FKF's court, and we must devise a quick formula to get our teams ready. Honestly, I don’t know what will be done but all I can promise you the teams will soon embark on preparations for upcoming assignments.”

The FKF boss predicted that the top-flight football league will resume in May at the earliest.

“Going by government's latest communication on Thursday, the earliest we can expect to resume action should be at the far end of May.

“The Ministry of Health's position at the moment is things are not looking good across the country, given there are rising cases of new Covid-19 infections and nobody is willing to take a risk to resume sports.”

Sports CS Amina Mohammed recently said they will be working closely with the health ministry to provide guidance.

“The numbers will determine how soon normalcy will resume. I have a talk with my colleague in the Ministry of Health to see what will happen,” said Amina.