His entry could mark the beginning of a new era where national team coaches are hired on merit.

•Inspired by Harambee Stars' winning streak in their last four matches, local football enthusiasts have been breathing down heavily on the federation's neck, demanding instant results.

•Perhaps, aware he is doing his final term, Mwendwa might be keen on leaving a good legacy. 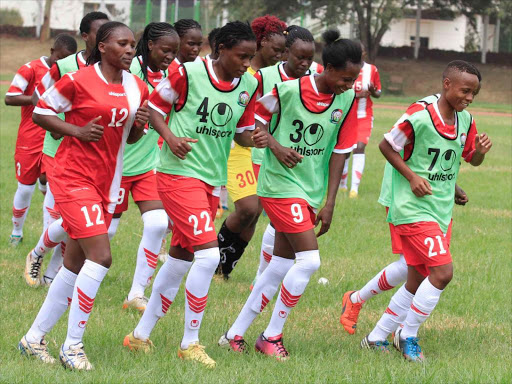 Harambee Starlets during a training session in Nairobi.
Image: FILE

"Uneasy lies the head that wears a crown.”

The FKF honcho is fidgeting uneasily in his seat, his recent decisions lending credence to his ballooning restlessness.

Inspired by Harambee Stars' winning streak in their last four matches, local football enthusiasts have been breathing down heavily on the federation's neck, demanding instant results.

This sudden urge for success might have informed the recent drastic changes we witnessed in the national women's team, Harambee Starlets, technical bench.

On Monday, FKF dropped a bombshell that claimed the scalp of Starlets head coach David Ouma.

Ouma, whose name has been synonymous with the Starlets, was shown the exit door after six years of glowing service.

The man tasked with spearheading Starlets' next hunt for silverware is Charles Okere who, until his appointment, was an assistant coach at FKF Premier League leaders Tusker.

Is he up to the task? Well, a popular African adage quips 'you can know a ripe corn just by looking at it.' Okere has been picked from a formidable side currently sitting pretty at the summit of the FKF-PL log with 36 points.

His entry could mark the beginning of a new era where national team coaches are hired on merit. Perhaps, aware he is doing his final term, Mwendwa might be keen on leaving a good legacy.

Nobody really knows why the axe fell on Ouma but then, as the saying goes, even the best dancer on the stage must retire sometime.

Ouma ambles out of the Starlets' bench a proud achiever, the impressive track record speaking volumes of his exceptional abilities.

After being thrown into the deep end in 2015, he revamped and guided Starlets to the 2016 Africa Women Cup of Nations (Awcon) in Cameroon for the first time in history.

There was little to write home about from the tournament given Kenya bowed out in the group stage.

Ouma would later prove that by crawling, a child learns to stand. In 2019, he fired Harambee Starlets to their maiden Cecafa title at Chamazi Stadium in Tanzania.

It was also the year that Starlets proved their mettle as a potential continental powerhouse in the qualifiers of the 2020 Olympic Games after stunning highly-rated Ghana 1-0 and seeing off Malawi 5-3.

They ultimately stumbled out of the race after crushing 3-2 on aggregate to Zambia.

And as Okere rolls up his sleeves to fit in Ouma's shoes, he already has his work clearly cut out.

His first task will be to guide the Starlets in an international friendly encounter against the Copper Queens of Zambia tentatively set for April 24 in Lusaka.

However, he'll face his real baptism of fire during the qualifiers of the 2022 Africa Women Cup of Nations that will also double up as World Cup qualifiers.

Okere knows quite well bad results will leave him with an egg on the face and we have faith he'll deliver.